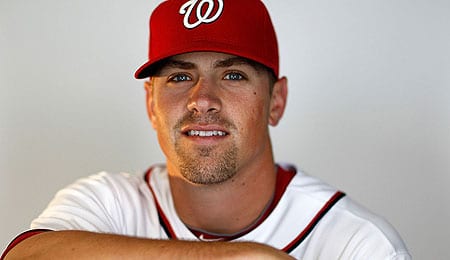 Tyler Moore’s heroics gave the Nats a lead in the NLDS. October magic!

Despite injuries he dealt with in 2011, we ranked Adrian Belte third among third basemen heading into this season.

Well, injuries were not an issue this year and he wound up topping what he had accomplished in his first season as a Ranger – so much so that you can make the argument that only Triple Crown winner Miguel Cabrera ranked above Beltre among players that qualified at the hot corner. And that list includes Edwin Encarnacion, by the way.

There are a few things that jump out from Beltre’s 2012 season. The most striking item is his work against righties. The right-handed hitter didn’t exactly scuffle against them in 2011 (836 OPS vs. 1076 against southpaws), but this season he dominated righties to the tune of a 984 OPS (compared to a surprisingly low 737 mark against lefties).

To us, that is the reason Beltre was able to put up his best season since that ridiculously impossible to duplicate final season with the Dodgers in 2004. We know that his time at Safeco soured a lot of Fantasy owners, but when you consider what he’s done in the three years since leaving that hitter’s nightmare – 96 homers and 115 doubles – it’s clear that 2004 wasn’t as big a fluke as many thought.

Beltre really turned it on after July, smacking a combined 18 homers (half his total) in August and September while batting at least .333 in each month.

The numbers speak for themselves: his second highest run total to (guess when?) 2004 and an OPS of 920. The only real downside to Beltre these days is that after being a double-digit steal man six times, he’s only swiped four bags total in three years since escaping from Seattle.

Beltre’s walk rate was up this year, and while his extra-base pop wasn’t quite as impressive as last year, when you factor in a 25-point increase in BA and nearly 30 points more in OBP – not to mention the full health – this season wins out easily as his best effort in Arlington.

Okay, so he didn’t show up in the Wild Card game (0-for-4), but neither did Josh Hamilton, and big freaking deal – that’s one game. Still, I suppose you could point to his career OPS of 754 for 91 at-bats in three separate postseason appearances and suggest that Beltre hasn’t delivered in the playoffs, but it’s not as if he’s massively underperformed.

There are still those who believe Beltre is overvalued, but don’t count us among that group.

He’ll be 34 early next season, and it’s reasonable to expect a decline in his home run rate, but even if his “slips” to say 30 homers, 95 RBI and a .300 BA, that still makes him a damn valuable asset at a very thin position.

By RotoRob
This entry was posted on Monday, October 8th, 2012 at 12:37 pm and is filed under BASEBALL, Player profile, RotoRob. You can follow any responses to this entry through the RSS 2.0 feed. Both comments and pings are currently closed.