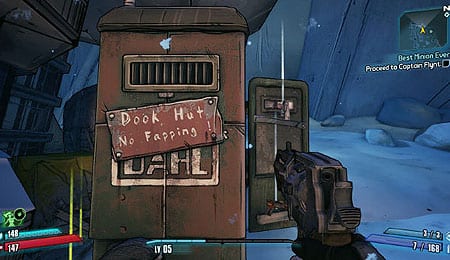 I’ve got that same sign on my bathroom, but, uh, I don’t listen.

Smooth and responsive, the controls should be immediately familiar to shooter fans. Jumping, melee attacks, sprinting and more are standard fare. In fact, about the only unique feature here is that the left bumper activates your character’s signature ability. Grenade tossing feels too imprecise, however — particularly an issue when equipping some of the game’s innumerable modifiers.

Vehicular sections favour a Halo-esque Warthog feel to them as you fishtail in one direction while spraying infinite ammo in another. It makes it easy to outmaneuver enemy vehicles and drop wayward baddies that cross your path.

Given the general tone and feel of Borderlands 2, it’s hard to imagine a more apt choice for their visuals than the colourful, cel-shaded characters and environments found here. That style makes each area you visit feel lively and interesting whether you’re making your initial discovery or passing through for the umpteenth time. Enemies are plentiful, though they become a bit repetitive after a while, and the ability to alter your appearance and armour is a welcome one.

Although the game is generally a treat to behold, it does carry some technical issues. Most noticeable (and notable) is the way textures appear fuzzy before the details pop in — even installed to the hard drive it was a frequent issue. Beyond that, there are also times when dropped loot will appear to be buried inside the landscape.

For years I’ve championed Rockstar and BioWare as beacons of auditory excellence when it comes to voice acting and soundtracks. Well, it’s about time 2k Games joined the discussion. It continues to consistently produce titles with outstanding voice work (BioShock, anyone?), and while Borderlands 2 isn’t approached with the same level of seriousness as other titles it still features an expansive cast of characters that are cleverly brought to life. A strong soundtrack and powerful-sounding gun play hold up their end as well.

Set roughly five years after the events of the original game, Borderlands 2 begins with you, a Vault Hunter, peacefully hitching a ride on a train courtesy of Handsome Jack (now the man in charge on Pandora) in an effort to locate another vault that’s rumoured to be even bigger than the last. As it turns out, Jack has an ulterior motive for his apparent hospitality, which means it’s time to cue Admiral Ackbar. Yep, let’s all say it together now, “IT’S A TRAP!!”

Left for dead in an arctic wasteland, you happen upon a Claptrap robot, which acts as your guide and helps you escape the area and reach Sanctuary. Here you’ll eventually meet up with Roland, the soldier from the original that has become the leader of the Crimson Raiders, and hatch a plan to topple Jack. Plenty of other familiar faces return as well, including previously playable characters and high-profile NPCs like Dr. Zed and Scooter.

The main story arc is nothing special in terms of originality or execution. Despite a handful of twists, you pretty well know from the get go who the bad guy is and what you have to do. It’s all about surmounting the many obstacles in your path — one of those “the journey is the reward” sagas. There are also plenty of chances to branch out thanks to loads of side missions that not only extend the game’s length but also reward you with experience points, money and loot. In fact, it’s incredibly easy to spend hours just messing around with the game’s secondary quests.

As if all that content wasn’t enough, the game allows you to play as four different character classes, each of which makes for a different experience. There’s Maya, who functions like a mage with her “Phaselock” ability, Salvador, the quintessential dual-wielding tank, Zero, who uses melee attacks and specializes in sniping enemies at a distance, and Axton, whose deployable turret might just be the single coolest thing in the game. A fifth character (Gaige) will be added as DLC.

Whichever character you choose can be developed as you see fit thanks to the availability of a more diverse skill tree. There are three paths for each character, allowing you to focus in a specific area or spread your upgrades around. Skill points can be reassigned at in-game stations for a fee as well, creating the option to take different approaches if you find your build to be ineffective or simply grow tired of it and want to try something new.

In addition to the skill trees, Borderlands 2 also features a “bad ass” rank that offers you the chance to supplement your base attributes. This is done by completing a laundry list of challenges — ranging from killing enemies to finding hidden areas. Most challenges have five levels with each successive one adding more points to your rank. Complete enough of them and you’ll start to pile up tokens that are then cashed in for percentile bumps in categories such as health, melee damage and reload speed. The team at Gearbox has absolutely packed this game to the gills with content; there’s always something to do.

Multiplayer returns as well, and it’s as engaging as ever. Up to four players can team up online to battle tougher foes and snag shinier loot. The game wisely allows anyone to take part in any mission, and should you play through a section you haven’t reached yet you’ll be given the option to skip that whenever you reach it in your own game.

However, as great as Borderlands 2 can be, it does have some issues. At the forefront for me is that the game can be completely relentless at times with enemies seemingly reappearing as quickly as I could kill them. Action-packed sequences are great, but without any reflective down time it starts to wear thin — one section I vividly remember saw packs of spiders emerge out of the ground for a solid five minutes as I attempted to check an area while steadily running out of ammunition.

More often than not, deaths tend to be the result of one of two scenarios: either you get completely overrun by enemies spawning out of every nook and cranny on the screen, or you get nailed with some sort of elemental or corrosive attack that bleeds your shield and health at a ridiculous speed. I also had a handful of resurrections because I entered areas that were off limits, even though it appeared I could (and should) travel there. True, the cost of dying here is merely a percentage of your funds; it’s just that too often I felt my demise was undeserved.

Cleverly written, well designed and loaded with content, Borderlands 2 is the kind of game you can get lost in (in a good way). The lure of leveling up and ever-present possibility that the perfect gun is right around the corner should be enough to keep you coming back for more.

By HC Green
This entry was posted on Wednesday, October 3rd, 2012 at 12:36 pm and is filed under Herija Green, Video Game Reviews. You can follow any responses to this entry through the RSS 2.0 feed. Both comments and pings are currently closed.