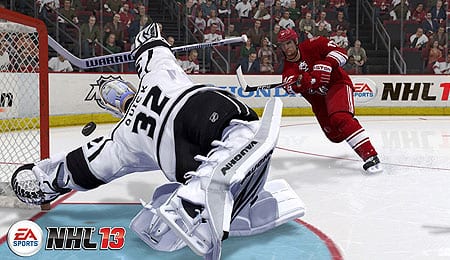 What lockout? New skating and goalie animations make NHL 13 the best-looking title yet.

Every year, EA releases its annual iteration of various sports titles and a large group of gamers roll their eyes and think ‘here comes another roster update with minimal evolution.’ The NHL series, though, has managed to keep away from that stigma due to innovative leaps forward both in core gameplay and extra features.

With NHL 13’s release, EA’s press material touts it as the one of the series’ biggest leaps forwards. Does it really live up to that hype? Quite possibly, but not in the way its marketing department will have you believe.

EA’s press release suggests that the new True Performance Skating (TPS) is the biggest innovation the series has seen since the introduction of the Skill Stick (NHL 07). That’s a bit of an exaggeration, and I personally think last year’s addition of in-the-slot battles was a bigger addition, particularly for Be A Pro mode. In any case, TPS is definitely the best looking that the NHL series has brought in terms of skating animation. It’s fluid, subtle, and definitely more realistic. It’s not necessarily a game-changer for control, though.

TPS is designed to try to bring real-life skating technique to the video game world. It really boils down to momentum. If you play hockey, particularly on ice rather than in-line, you’ll know what I mean. EA does a pretty good job of simulating this, and everything from gliding to quick starts (done by pressing the left analog in) carries your momentum forward. Keep digging your skates in and it becomes more difficult to control the puck; try to protect it on a wide turn and you’ll feel the momentum lag, particularly if you’re using a slow skater.

The same left-analog motions are used from recent years– such as a hard push in the opposite direction for a quick stop — and yet I found myself more in tune to my player’s movement than before. In previous iterations, skating ratings seemed to merely be a matter of overall speed, but in this case, there’s a real feeling of difference between a Steven Stamkos and a Douglas Murray.

It’s an impressive feat, yet it’s subtle, and I think that’s part of the problem when proclaiming it as a giant innovation. In most cases, you won’t really notice it — it stands out the most when you’re using a poor skater. It’s really a matter of finesse, and die-hard NHL gamers will appreciate it most, especially those who’ve played hockey and know the exact feeling EA is trying to replicate. However, most gamers won’t find a huge difference in how they experience or play the game.

It’s also worth mentioning that EA did add one fairly significant new control item. LT/L2 allows your skater to skate backwards, which really opens up creativity with the puck, including a whole host of new breakaway/shootout possibilities.

As always, EA’s NHL controls are top-notch despite the lack of anything truly groundbreaking. If gameplay changes are one of your main reasons for picking up an annual sports iteration, you won’t find too much here. However, if you’re going to buy the darn thing anyway (and really, there are a ton of reasons to do so, especially since we’ll probably need some form of lockout filler), then there’s a good chance you’ll enjoy the tweaked-but-not-revolutionary updates the TPS brings.

You’ll never be able to fault EA in the graphics department, and NHL 13 manages to raise the bar just a tad higher. A big part of it is related to the TPS controls, as the skating animations are just a little less canned than usual. Also, goalie movement is much more fluid. EA implemented a new goalie system called Full Limb Control (yeah, it’s a strange name), which essentially means that goalie limbs are individually animated instead of preset whole-body moves. This means that you’ll get more sprawling, scrambling saves like in real life, and it’s all done without looking clunky or like the game is defaulting to a preset list of moves.

EA’s arenas also look sharper. While you won’t spend too much time looking at the crowd, Jumbotron, or other arena amenities, everything feels like there’s an extra level of detail. This includes arena lighting, which does affect how players look — it’s particularly noticeable on the impressive camera angles used for replays.

Gary Thorne and Bill Clement are back as commentators, which will confuse any hockey fans that didn’t watch the NHL during the ESPN broadcast era. As usual, much of the material is recycled, though there are new nuggets included, along with new player names. Still, one of my long-running gripes for all sports franchises is that they never correct mispronounced names. Boston’s Brad Marchand may have just got a hefty new contract extension (along with the hearts of New England teenage girls) but that isn’t enough for NHL 13 players to hear his last name pronounced correctly.

Just about every sports franchise’s new iteration — be it EA or a competitor — touts its new AI. NHL 13 indeed has a revamped AI, but it’s not just on the ice. For immediate play, offensive/defensive strategies are more flexible and there are subtle shifts in skater decisions (such as fewer skaters bunching up at the blueline and a smarter cycle game). It’s still not perfect, though, and despite AI improvements, you can still get away with a bit of a run-and-gun game. Of course, incremental changes can be implemented via patches and updates. That’s a wait-and-see, and the good news is that nothing’s broken or worse.

Off the ice, the management simulation is supposedly rebuilt to prevent stupid and/or senseless mistakes. One of the biggest gripes in recent years comes from how CPU GMs manage their rosters — veterans get shoved down to the minors for no reason and decisions seem to occur without much thought of the bigger picture. EA has tried to correct this with a new GM algorithm, but I can’t say it’s quite perfect yet — in my GM campaign, the Anaheim Ducks initiated a trade to my San Jose Sharks, giving up two-way centre Saku Koivu for a minor-league centre with little potential. Unless Anaheim’s CPU GM was in full salary-dump mode three weeks into the regular season, something wasn’t quite right.

NHL 13 may not have any major quantum leaps in core gameplay but it more than makes up for it with the sheer number of options you have for how you play the game. The old standbys — traditional team seasons, Be A Pro, Ultimate Team, Legends– are still there. Stacked on top of that are GM Connected (a revised online mode) and NHL Moments Live.

GM Connected comes with all sorts of sub-options, and your appreciation of them really depends on how much you like the management side of things. So let’s break it down:

In other words, you can control the game from any part of the hierarchy. Think you can actually build the Columbus Blue Jackets better than Doug MacLean and Scott Howson did? Go ahead and give it a shot (really, history will judge you kindly). Want to be a foot soldier in a virtual league? Get your digital skates on — but don’t get too mad when your buddy trades you.

All of your league’s activity can be followed via a new mobile app. This demonstrates a ridiculous amount of variety in how the game is played, and it also creates a very unique sports geek experience — yes, you too can obsessively check your Fantasy league featuring your virtual team. It doesn’t get much more meta than that.

My biggest issue with these modes has less to do with the content and more with the execution. I get why EA wants stylized menus and loud music blaring as data saves/loads, but I can’t understand why each decision takes so long to process. Perhaps the database is just so massive that it takes that time to handle — and the bells and whistles are to provide distraction during that process. The flip side to it is that the bells and whistles eat up processing power that could otherwise be used to expedite saving a simple decision, especially if it’s not connecting to an online server.

Coaching has also been added, and if you’ve ever wondered how teams would perform in a simulation using the Tampa Bay Lightning’s 1-3-1 defensive system, now you can muck with it in real time. Coaching takes place in a screen similar to the Be A Pro live updates between shifts, and these fortunately take place in real time. For coaching, all of the pre-game and in-game options are available, from line changes to situational strategy.

Okay, so we’ve got regular gameplay, Be A Pro career gameplay, online gameplay, virtual GM, virtual coach, online player under a virtual GM… what else do you need? How about special situations pulled from the past? That’s where NHL Moments Live comes in, and while I originally thought this was a ridiculous idea, it’s actually a nice sit-down-and-play alternative if you’re burned out on regular season games or don’t feel like thinking about virtual GM moves. NHL Moments Live takes historical situations and then puts you in control of the player/team to see if you can make it happen. For example, one of the default moments is Sidney Crosby’s comeback game last season — NHL 13 plunks you in halfway through the game and sees if you can grab two more assists in the remaining time to match history.

When the NHL season gets rolling, EA will update NHL Moments Live with real-life situations from this season, allowing you to recreate barn-burner events or milestone moments. Yes, it’s kind of gimmicky, but it’s surprisingly fun — I found myself going through three or four different Moments at a time before returning to the core gameplay features.

Virtual hockey fans have never, ever had the amount of options that NHL 13 presents. Add in a solid core game with revamped skating and you’ve got a hockey experience that’s greater than the sum of its parts. With so many ways to play, it’s impossible to not find something that will catch your fancy — and when you’re burned out on that, there are plenty of other ways to try as well.

If your greatest fear is an extended NHL lockout (there’s still time to prevent this!), NHL 13 can more than fill the void in the meantime.

By Mike Chen
This entry was posted on Tuesday, September 11th, 2012 at 12:41 pm and is filed under HOCKEY, Mike Chen, Video Game Reviews. You can follow any responses to this entry through the RSS 2.0 feed. Both comments and pings are currently closed.