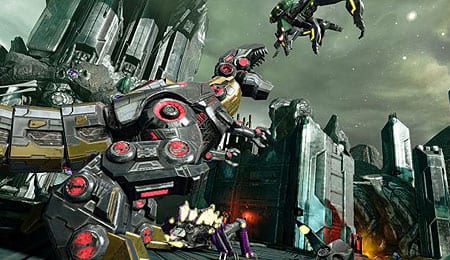 Me Grimlock wish that was Wheelie and not Insecticon.

As a child, my holy trinity of cartoons was always Transformers, G.I. Joe and Robotech. Of that group, only the robots in disguise continue to resonate in any real sense despite the continued efforts of Michael Bay. So ever since High Moon Studios renewed my faith with War for Cybertron, I have been eagerly anticipating its follow-up effort. Well, Transformers: Fall of Cybertron is here… and I must finish this review — no matter the cost.

Although the core functions (aiming, shooting, transforming) remain identical to what we saw in War for Cybertron, quality additions have been made to improve on them. One such feature is the ability to flip your gun hand from right to left, which allows you to better take advantage of cover. Movement speed has also been amped up courtesy of a Teletraan I upgrade as well as the option to sprint. It helps strike a better balance between ponderous and accessible.

For better or worse there seemed to be less vehicular-specific sections in Fall of Cybertron, though the controls on that front have been tightened as well. In particular the flying segments feel much crisper and more enjoyable thanks to improved maneuverability.

While still limited by the inherent metallic nature of Cybertron, High Moon was able to find more ways to vary the environments this time around. This helps give the game’s 13 chapters a more unique feel with areas differing significantly in terms of openness and pace with cramped quarters requiring a more deliberate play style versus some of the aerial zones. The robots themselves retain their G1/film hybrid appearance, and both returning characters and new additions are easily recognizable. There are some occasional slowdowns in the frame rate, though it never becomes debilitating.

Voice acting is once again hit or miss for me. Beyond Optimus Prime, who continues to be voiced by Peter Cullen, some characters retain their idiosyncrasies (Soundwave, Jazz and Grimlock to name a few) while others sound nothing like their G1 counterparts (Starscream, Slag/Slug). Do I expect them to get Casey Kasem to voice Cliffjumper? No, but they could’ve retained the spirit of his performance. The overall quality is good; it just doesn’t always satiate my G1 desires. Beyond the voice work, a solid soundtrack and quality effects round out the audio.

Ongoing hostilities between the Autobots and Decepticons have left their home world a smoldering shell of its former self, and the only recourse for Optimus Prime is to abandon Cybertron in search of the Energon needed to survive. G1 fans will recognize the basic plotline as the one seen in the first episode of the cartoon with the Autobots fleeing in the Arc only to be ambushed by the Decepticons. However, while the general story will be familiar, High Moon has heavily shuffled the origins deck for a number of high-profile Transformers — most notably the Dinobots and Combaticons.

Told over 13 chapters, Transformers: Fall of Cybertron once again features a split campaign. Early on you’ll control a selection of Autobots as they try desperately to cull enough Energon to launch the Arc, while later sections cast you as the Decepticons and their efforts to sabotage it. Unlike the original, however, you’re limited to a single character.

That decision turns out to be a double-edged sword. On one hand, the removal of character selection reduces replay value and takes campaign multiplayer with it. On the other, building the chapters around the specific skills of each Transformer allows for the level design to feature more variety. That means they’re not all point and shoot this time with stealth-based affairs and levels as overpowered bad asses breaking up the standard gunplay segments. It all hits a crescendo with a final level that sees you operating as multiple bots on both sides of a massive battle.

There’s also a healthy amount of the now nearly obligatory collectables. Audio logs flesh out the story a bit, blueprints unlock new weapons and items for purchase and Energon shards function as currency when visiting the Teletraan I consoles. Here you can do things like improve your health and shields, upgrade weapons and change your loadout.

As noted, there is a lot of reimagining of the Transformers timeline with the aforementioned Dinobots and Combaticons, sub-groups created on Earth in the G1 series, featuring prominently. There are also dialogue nods to the cartoon, including Megatron’s (well, Galvatron in the film) contemptuous assessment of Starscream’s coronation. It’s a little odd to see so many elements rearranged, but this is a solid showing on the storyline front.

Competitive multiplayer returns with a setup that feels nearly identical to War for Cybertron as you once again choose between one of four character classes: Titan (read: heavy soldier), Scientist (medic), Infiltrator (stealth) and Destroyer. Each one has a clear role to fill in any battle, and you’re encouraged to play as all of them with the classes leveling up separately. Ten maps and four modes are on offer with the most interesting being Headhunter, which has you collect Energon from defeated foes and then take it to a moving location to score points. It’s all quite familiar even if controlling massive, form-altering robots gives Fall of Cybertron a slightly distinct feel.

One area where the multiplayer has been beefed up is in customization as the Energon earned from matches can be used to purchase new parts that are then mixed and matched. It’s not as deep as it initially appears, though, as most of the parts are based off characters from the campaign and colour schemes are limited to pre-set two-colour palettes.

Rounding out the offerings is the Horde-esque Escalation mode. Here you and up to three others can face off against 15 waves of increasingly difficult enemies. Along the way you’ll earn Energon that is then used to access new areas, purchase new guns, rearm yourself, activate defensive turrets and more.

Each of the four maps has a selection of available Autobots or Decepticons. You cannot double up, which is good since every character has a unique ability that will come in handy, such as healing or providing ammunition. Keeping it limited to 15 rounds helps matches moving along and not feel like such a time commitment versus similar modes found in other games.

While not a huge leap forward from its predecessor, Transformers: Fall of Cybertron is a damn fun game with a strong campaign and solid multiplayer. Anyone that enjoyed the first game is sure to find this to their liking as well.

By Herija Green
This entry was posted on Wednesday, September 12th, 2012 at 12:40 pm and is filed under Herija Green, Video Game Reviews. You can follow any responses to this entry through the RSS 2.0 feed. Both comments and pings are currently closed.