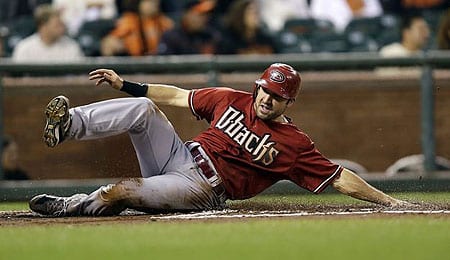 Adam Eaton is sliding his way into Fantasy prominence.

Alas, another season of baseball is winding down. This week in H2H formats, playoffs should fully be underway and the rest of the Fantasy world will be scrambling to find the final pieces of the puzzle that will lead to glory. I want to thank the regular readers for joining us this season as we searched high and low to find some of those diamonds in the rough. It’s been a blast.

We’re going to wrap up this year’s MLB Troll by adding a couple of NPB players that could be plying their trade in MLB next season. I’ve always been a huge proponent of the early bird getting the worm, and for those of you in deep keeper formats it wouldn’t hurt to stash either of these players away for the 2013 campaign.

Let’s get to this week’s Troll recommendations and good luck to all down the stretch. We’ll see you again in the spring.

Andrew Cashner, SP, San Diego Padres (CBS: 29 per cent owned, ESPN: 4 per cent): Out since early July with a strained lat, Cashner returned to the rotation last week and was in fine form. He tossed five strong innings against Arizona, allowing four hits, no walks, and a couple of earned runs in a no-decision. The Padres are going with a six-man rotation down the stretch and Cashner’s got the Rockies at home in his next start. San Diego has been on quite the roll since the break and the successful return of Cashner will do nothing but aide in ensuring a strong finish for the Friars.

Adam Eaton, OF, Arizona Diamondbacks (CBS: 9 per cent owned, ESPN: unowned): What an amazing breakout campaign it’s been for Eaton. In 488 at-bats at Triple-A Reno, he hit seven homers with 45 RBI, scored 119 runs, stole 38 bags, and amassed an amazing .381 BA on his way to capturing MVP honours in the PCL. He also hit 46 doubles. In four games since being recalled, Eaton has gone 8-for-21 with five runs scored. Chris Young is dealing with a quad injury and we know how those can linger. Get Eaton rostered and active in all formats for the stretch run.

Chris Archer, SP, Tampa Bay Rays (CBS: 9 per cent owned, ESPN: unowned): In a spot start Saturday, Archer was dominant. In seven IP, The 23-year-old allowed four hits and two walks while striking out 11. Archer made one mistake to Josh Hamilton that turned into a two-run homer, but he’s not the first nor will he be the last hurler to make that faux pas. I’d think that this performance guarantees him a few more turns in the rotation for the Rays.

Donovan Solano, 2B, Miami Marlins (CBS: 5 per cent owned, ESPN: 3 per cent): In his past seven games, Solano has gone 10-for-31 with five RBI and tossed in a couple stolen bases. He’s going to be getting full-time at-bats as the Marlins limp towards the finish line and you could do much worse at middle-infield in deeper leagues.

Zach Britton, SP, Baltimore Orioles (CBS: 43 per cent owned, ESPN: 32 per cent): In his past four starts, Britton has been totally dominant, winning each outing and allowing a total of three earned runs in the process. It doesn’t get much better than that and it couldn’t come at a better time for the Orioles as they battle the Yankees for supremacy in the AL East.

Starling Marte, OF, Pittsburgh Pirates (CBS: 36 per cent owned, ESPN: 5 per cent): Marte was activated from the DL Friday after missing three weeks with a strained right oblique. He should garner full-time at-bats down the stretch in the Steel City. The power/speed potential makes him a solid option in all formats.

George Kottaras, C, Oakland Athletics (CBS: 2 per cent owned, ESPN: unowned): In his past five games, Kottaras has managed to slug three homers with 13 RBI and six runs scored. Talk about being on a roll. Ride the hot streak for all it’s worth.

Tom Layne, RP, San Diego Padres (CBS: 1 per cent owned, ESPN: 2 per cent): Since being converted from a starter to middle-reliever back in June, Layne has gone from organizational depth to bullpen gold. He picked up his second save of the season last week for the Padres and has been lights out in that pen since being recalled. In 10 1/3 IP, Layne has one win to go along with the saves, plus four holds, a 1.74 ERA, and 17 strikeouts. He’s earned the confidence of the Padres and should garner opportunities in high leverage situations in September.

Lew Ford, OF, Baltimore Orioles (CBS/ESPN: unowned): A broken thumb that will sideline Nick Markakis for the next six weeks means that the Orioles are rolling down the stretch with a combination of Ford and Nate McLouth in left field. Ford, who has shown a bit of pop with three homers, including one against the Yankees Saturday, could provide some value in AL-only leagues.

Wily Peralta, SP, Milwaukee Brewers (CBS: 5 per cent owned, ESPN: unowned): Mark Rogers has been shut down and Peralta slides into his slot in the Brewers rotation. In his first appearance against the Marlins, Peralta pitched six quality innings for the win. The free passes have to be a concern but as a streaming option in deeper leagues he should have your attention.

Tony Cingrani, SP, Cincinnati Reds (CBS: 5 per cent owned, ESPN: unowned): The Reds gave the young phenom the call on September 4. Cingrani is coming off a great year in which he managed to strike out 172 batters in 146 IP. Expect him to see some action as the Reds move closer to clinching in the NL Central. Who knows, there might even be a spot start in the works.

Kyuji Fujikawa, RP, Hanshin Tigers (CBS/ESPN: unowned): The most dominant closer in the Japanese game will be looking at International free agency for the first time this winter and it’s no secret he’s wanted the challenge offered by MLB. Since becoming a closer in 2006, Fujikawa has compiled a 1.25 ERA, 0.86 WHIP, 217 saves, and an amazing 631 strikeouts in 447 IP. He’s definitely an intriguing bullpen option heading into 2013.

Hiroyuki Nakajima, SS, Seibu Lions (CBS/ESPN: unowned): Remember this guy, Yankee fans? Nakajima tried the posting route last year and in a bit of a bizarre move the Yankees won the right to exclusive negotiations. Nakajima wasn’t interested in the least in being a reserve infielder in New York and returned to Japan where he’s managed to hit 13 homers with 67 RBI and is currently leading the Pacific Coast League with a .330 BA. He’s heading into 2013 as a free agent and will again be looking for a job on this side of the Pacific.

By Tim McLeod
This entry was posted on Sunday, September 9th, 2012 at 2:40 pm and is filed under BASEBALL, The Wire Troll, Tim McLeod. You can follow any responses to this entry through the RSS 2.0 feed. Responses are currently closed, but you can trackback from your own site.