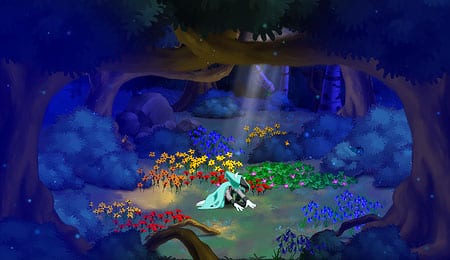 Dust might just be the best looking XBLA game, ever.

Since its inception in 2008, the Xbox Live Summer of Arcade has always featured at least one stellar original title — starting with Castle Crashers and continuing with the likes of Shadow Complex, LIMBO, Bastion and others in subsequent years. Thus far, however, the 2012 offerings have lacked that amazing signature title; settling instead for a collection of solid games.

Well, as it turns out it was just saving the best for last. Dust: An Elysian Tail is a fantastic game, and that it’s essentially the work of one man, Dean Dodrill (under the developer name Humble Hearts), makes it all the more remarkable.

Smooth and imminently satisfying, the combat in Dust becomes second nature in no time flat. You have two melee attacks to hew enemies into bits along with a floating companion named Fidget that can fire projectiles at your foes. There isn’t a long list of combos available, and yet there’s such an artistic value to the fighting that it rarely feels repetitive even as your kill count edges into quintuple digits.

Behind this triumph is the pairing of Fidget’s elemental projectiles and your “dust storm” attack, which allows you to create a whirlwind by rapidly spinning your sword and in turn causing Fidget’s strikes to careen into your enemies over and over again. Once you get the hang of chaining attacks and juggling foes, your combos will easily exceed 1,000 hits, earning you both a satisfied smirk and some bonus experience points.

More moves are unlocked as you progress, including different elementals for Fidget as well as things like double jumps and sliding attacks for you — abilities that allow you to reach previously inaccessible areas. Quick dodges are smartly mapped to the right analog stick and both triggers, allowing you to combine them with jumps to evade enemy strikes on the fly. It’s nearly flawless.

One would be hard pressed to find a more aesthetically pleasing Xbox Live Arcade game than Dust: An Elysian Tail. Everything is exquisitely rendered in a beautiful, cartoonish style with expressive and relatable characters, varied enemies and tons of interesting environments. Even as you revisit sections and dish out your umpteenth 800-hit combo, the game’s visuals keep everything interesting and feeling fresh because there just aren’t many titles that look as good as this.

All of that effusive praise does come with a pair of caveats, though — one minor, one more significant. On the trivial side is how busy the screen can get at times, especially when squaring off against the floating wizard that constantly summons monsters to attack you. Many of my defeats occurred in these types of situations, when I lost track of where I was and took a pounding as a result. Of greater concern, though, is the inconsistent frame rate. It holds up well most of the time, but it does take the occasional nosedive to the point you feel obligated to just stop what you’re doing and wait for it to fix itself.

While the graphical envelope has been pushed for a while now on the downloadable marketplace, one area that always seems to bear the brunt of relatively low budgets is voice acting. However, I’m thrilled to say that is not the case here. Dust unquestionably features the best voice work on Xbox Live Arcade (or PlayStation Network) with a cast of engaging characters that is strong from top to bottom. Couple that with well-written, witty dialogue and you’ve got a new standard bearer for the service. Satisfying sound effects and a quality soundtrack add another layer to the excellent presentation.

When the game opened with a mysterious, amnesia-ridden protagonist, a talking sword and its cutesy flying marmot of a guardian, I thought style had once again trumped substance. I was wrong. While the land may be populated by human-sized, bipedal versions of rabbits, lizards and other creatures, their depth of character provides them with more believability and humanity than most games even come close to matching.

Beneath the surface of these marvelously drawn characters is real emotion. You care about Dust and Fidget because they’re not just archetypes — Dust is more than a brooding antihero just as Fidget is more than a wise cracking sidekick along for comic relief. Their interplay is endlessly entertaining, and it lends some levity to a story that features some adult storylines, including ethnic cleansing as General Gaius seeks to wipe the ancient “Moonbloods” from existence.

It’s surprisingly mature subject matter, and it’s deftly handled from start to finish. Each successful step along the story’s primary quest opens up the world, both physically and in terms of back story as Dust unravels the mystery of his origin. The payoff is damn good, too, and you can really tell that a lot of effort went into creating this world and its inhabitants. Despite its modest beginnings, nothing feels rushed or formulaic during your progression.

As with any good sword and sorcery, action adventure, Dust: An Elysian Tail also features a healthy assortment of side quests to earn more experience and snag some treasure. Some are your standard “collect X number of item Y,” but others have more depth and emotional weight attached to them, thanks in no small part to the aforementioned strong voice acting. A series of challenge arenas are also located throughout the land, waiting to be tackled for prizes and leaderboard placement.

Fans of indie gaming will no doubt delight in rescuing a host of familiar characters as well, many of whom incorporate the source material’s signature game mechanics to reach them; for instance, when you’re on the path to finding someone from last year’s Summer of Arcade, the world assembles at your feet. Like so many other aspects of Dust, it’s exceptionally clever in its execution.

Leveling up is standard fare as you earn experience from killing monsters and undertaking quests, which allows you to upgrade one of four areas (health, attack, defense and Fidget’s attacks). The game locks your progression in a specific focus after a certain point to ensure that all four categories receive nearly equal attention. Equipment can be found, purchased or crafted by locating blueprints, which use the raw materials that monsters drop throughout the game. It’s a nice blend that’ll happily keep you grinding away for hours on end.

Still, as enjoyable as the combat is there are times when it can feel like overkill as enemies repopulate each time you leave an area, and since many sections must be revisited if you want to acquire previously unreachable treasure, it can seem like a chore. This is especially true of the latter stages when foes really flood the screen and natural elements (i.e., snow) can make it tough to see. Environmental hazards also do an absurd amount of damage — and there’s something not right about an icicle hurting way more than a blow from a stone giant.

Those are minor nitpicks, though, and some may even find the combat so engaging that they don’t mind retracing their steps while slogging through enemies. In terms of length, you could probably push through the story in around nine hours if you bypassed treasure hunting and level grinding. Conversely, if you embrace those elements you could comfortably log between 15 and 20 hours with the chance to go from more if you’d like.

Although the next few months feature some heavy hitters on the release calendar, Humble Hearts’ labour of love is going to get some run for Game of the Year… and it deserves it. Dust: An Elysian Tail is so well done, from the story to the presentation to the gameplay, you’d be crazy not to make time for it.

By Herija Green
This entry was posted on Tuesday, August 14th, 2012 at 10:09 am and is filed under Herija Green, Video Game Reviews. You can follow any responses to this entry through the RSS 2.0 feed. Both comments and pings are currently closed.