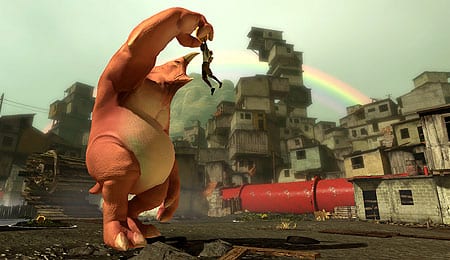 Things aren’t always so sweet between Quico and Monster.

Chances are you’ve never experienced a video game quite like Papo & Yo. Developer Minority Media draws on some personal demons from creator Victor Caballero to craft a world that’s both magical and haunting. It’s an interesting effort to be sure, but the third entrant in Sony’s PSN Play 2012 promotion is certainly not for everyone.

Given the simplistic gameplay, it should come as no surprise that there’s a very basic control layout in place. You pick up and drop objects with square or throw them with the circle; it’s not very easy to aim, but that’s unimportant since accuracy is not required. Hitting triangle dispatches your toy robot (Lula) to activate distant triggers, and pressing “X” makes you jump. Also, when carrying Lula on your back you can tap the “X” button again for a limited jet pack burn that’ll keep you airborne for a little while longer.

It’s mostly solid, although jumping from object to object is sporadically irritating as it can be difficult to properly gauge distance, which leads to some tumbles. The game’s camera is another potential hazard when being pursued since Monster is invariable right on your heels. That results in being unable to see yourself from the default camera position.

Even after downloading the patch there are technical issues in the game’s environments. Invisible walls halt progress, Monster gets stuck, mouths don’t move during dialogue scenes and objects clip through each other. However, those shortcomings don’t define the visual aesthetic of Papo & Yo, not by a long shot. The colourful, graffiti-tagged favelas combine with the interesting way inanimate objects spring to life to give this title a unique look, and one that ultimately serves the source material well.

Perhaps the game’s strongest element, though, is its soundtrack. The acoustic Latin American music hits all the right notes throughout, elevating the visuals with beats and riffs that will stay with you well after the credits roll. As lively and enjoyable as those tunes are, the rest of the audio fails to impress.

Ostensibly, Papo & Yo is a fantasy adventure about a boy named Quico, who is pursuing a mysterious girl through a world that can be altered in some Inception-esque ways with buildings that move, bend and even fly. Early on he’s joined by a hulking yet seemingly benign monster that is both essential to moving forward, and then eventually the single biggest impediment to that progression.

Where the game delivers with its story, however, is in the subtext. This fantasy world is, in fact, an escape for Quico, who is the implied victim of domestic abuse at the hands of an alcoholic father. At least initially there is some subtlety to the parallels as the monster is an amenable sort before he eats one of the frogs and flies into a rage where he’ll hurt Quico if he catches him. Once it picks up steam, however, the symbolism comes at you fast and furious with little need to read between the lines.

By the time you reach the game’s powerful (and extremely somber) conclusion everything will have been spelled out for you to a degree that there’s no way you’ll have missed anything. It all makes for a very intriguing tale, and even I, whose parents were never even social drinkers, found myself absorbing the final act in solemn silence. There’s no question — it makes you think.

As original as the inspiration for the story may be, Minority Media doesn’t deliver as effectively when it comes to the gameplay. Best classified as a puzzle platformer, Papo & Yo never really challenges your reflexes or your wits. Jumping segments can be a bit dicey, but that’s only because of the point of view, and falling results in nothing more than possibly having to go back and start again.

That would be fine if the puzzles took some critical thinking to overcome. Unfortunately, however, that isn’t the case. More puzzles consist of pushing one switch to reach another switch, then going there and doing it again until all the switches and gears have been toggled. At that point you’re free to progress to the next area where odds are you’ll repeat the process. If you do ever get stuck there are “hint boxes” that you can pick up and look at to get you headed in the right direction.

A game like Journey proved you can craft an amazing experience without challenging gameplay, but that had a beauty and an elegance that Papo & Yo cannot match. With a similarly short run time — figure three or four hours tops to clear the five-act story — gamers need to be embrace the story’s emotional weight to make the simple, albeit mostly enjoyable, puzzles feel worth the time.

Unquestionably, Papo & Yo’s biggest selling point is its story. If an artistic vision of some heavy subject matter sounds interesting I would recommend it without hesitation. However, if you’re only in it for the gameplay you’re probably better off looking elsewhere.

By Herija Green
This entry was posted on Thursday, August 16th, 2012 at 12:32 pm and is filed under Herija Green, Video Game Reviews. You can follow any responses to this entry through the RSS 2.0 feed. Responses are currently closed, but you can trackback from your own site.