Will the Philadelphia Flyers Have Enough on D? 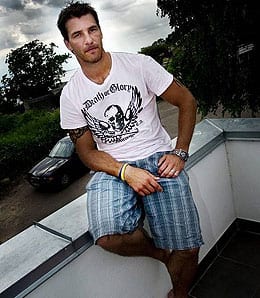 Andreas Lilja’s injury is another blow to the Flyers’ defence corps.

While no one will ever confuse defenceman Andreas Lilja as a difference maker, news that he underwent hip surgery last week and could miss up to four months further underscores how shaky the Philadelphia Flyers’ defence corps could be in 2012-13.

GM Paul Holmgren suggested that Lilja will be ready to return by the end of October or beginning of November, but Lilja thinks he may not be back until December.

Throw in the ongoing issues and doubtful return of Chris Pronger, Andrej Meszaros’ injury issues, the loss of top-scoring blueliner Matt Carle to free agency and the failure to land either Ryan Suter or Shea Weber, and you’ve got yourself a very cloudy blueline situation in Philly. Yes, the offensive group is young, deep and improving, but can it score enough to compensate for a depleted defence corps and a highly inconsistent goalie in Ilya Bryzagalov?

All that’s happened to offset those losses this offseason has been the acquisition of Luke Schenn, but there’s no guarantee he’ll take the next step that’s required of him.

The Flyers will suddenly have to lean heavily on youngsters Marc-Andre Bourdon — recently re-signed to a two-year deal, but no stranger to injury issues himself – and Erik Gustafsson. Gustafsson, signed as an undrafted free agent out of U.S. college, occasionally showed flashes of ability in both the regular season and the playoffs, but is he ready to assume close to 20 minutes of ice time per game?

If veterans Braydon Coburn or Kimmo Timonen get hurt, the Flyers are truly screwed. The depth behind their front two is dwindling: Schenn, Nikolas Grossmann, Bourdon, Gustafsson and Brandon Manning would round out the top seven until Meszaros (who could miss the whole season) and Lilja are back. Bruno Gervais, Oliver Lauridesen, Danny Syvret and Matt Walker will also factor into the mix.

Coburn will now face the opponents’ top lines each night while at the same time be expected to step up offensively with Carle in Tampa Bay. Coburn had nine goals and 36 points in his first full season as a Flyer in 2007-08, but he hasn’t really come close to that since – especially in the last three seasons. Philly didn’t need Coburn to do much on the offensive end when Pronger and Carle were on the team, but it needs him now.

Grossmann did very well after coming over in a trade from Dallas, but the Flyers will need even more from him. He’ll need to log more PT than he ever has, and it’s reasonable to wonder if he’ll be exposed in that scenario.

Manning intrigues me greatly, as when he was forced into duty because of injuries last season, he didn’t look out of place at either end of the ice. The kid can skate and he has some nice offensive potential – something that is quite scarce among the Flyers’ current blueline options.

Meszaros was sadly missed down the stretch last year after his back injury and while he came back late in the playoffs, he clearly wasn’t himself and could not stem the tide against the Devils. His torn Achilles’ injury this summer could cost him the entire season and is perhaps the biggest blow to the team. This injury will put more pressure on Schenn to play a crapload of quality minutes.

Timonen – who should be the new captain, by the way – will also need to log heavy minutes… 22 per game at the minimum, I would think.

There’s still the possibility the Flyers could dip into the free agency pool (Scott Hannan, Carlo Colaiacovo, among other possibilities), but obviously no one is still available that will make a huge difference.

Given all this uncertainty, the key to the Flyers’ season may lie with the last line of defence. If Bryzgalov can flash his March form on a more consistent basis, this team may be able to overcome all these losses. If we see more of the “lost in the woods” version of Ilya, it could be a long season in the City of Brotherly Love.

By RotoRob
This entry was posted on Monday, August 13th, 2012 at 2:22 pm and is filed under HOCKEY, RotoRob, Team report. You can follow any responses to this entry through the RSS 2.0 feed. Responses are currently closed, but you can trackback from your own site.