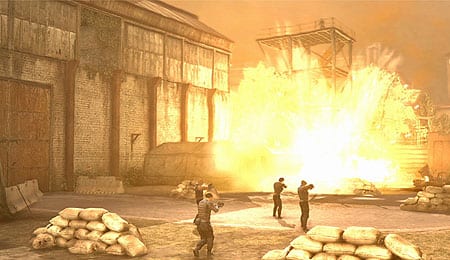 Warning, explosions may be closer than they appear.

The Expendables hit the big screen in 2010, proving once again that a movie doesn’t need fancy plotlines or character arcs to be good — all it really needs is a bunch of dudes, a bunch of guns and a second, larger group of dudes to get mowed down by the original dudes with guns. With a theatrical sequel releasing later this month, it’s not surprising the Expendables would take their signature style to the gaming world as well. Developed by Zootfly, The Expendables 2 Videogame is a gun- and enemy-filled bullet fest that’s keen on delivering serious action. The game also heralds the start of Sony’s PSN Play 2012 promotion, so it’s safe to say the stakes are high on this one.

Expendables plays like a twin-stick shooter, so movement and aiming are par for the course. Dodging, taking cover and jumping are all present, giving you a chance to play it safe when necessary, even though that might not be The Expendables’‘ style. Guns and melee attacks make the game what it is, but each character also has access to a signature attack, played out with a close-up animation that takes out an enemy and gives your weapon special ammo for a short time. Co-op teammates can also hop in during your attack and add to the damage, taking out more foes and giving them special effects as well.

It’s not a perfect fit, however, as context-specific actions (like picking up weapons or reviving teammates) takes an inordinate amount of time to get started. And when you factor in the constant gunfire you’ll be taking throughout the game, this just isn’t acceptable, as trying to help out teammates will inadvertently lead to your doom as well.

The biggest issue though, is with the aiming. You’d think arguably the most important aspect of the game would be the most polished, but sadly it’s not. Besides which direction your character is pointing, you have no indication as to where you’re aiming, which practically makes shooting guesswork until the shot hits its mark. Any type of indicator, like a cursor or laser sight, would’ve been greatly appreciated.

Shooting down hordes of enemies is great and all, but how the damage plays out on screen is just as important. The Expendables’ gun-toting, explosion-dealing journey takes them all across the world, and each new location looks pretty good, whether you’re gunning down pirates in a Somalian harbour, hunting mercs in the Balkans or pulling a prison break in Burma. It’s an explosion- and gun-filled trek, and there’s more than enough of both to keep you occupied throughout.

Sadly, the visuals actively work against the game, with screen obscuring effects throughout. Bright areas are too bright, making the drab enemies blend with backgrounds, while dark areas are too dark, hiding foes entirely. Other effects included to make levels more atmospheric, like Somalia’s sandstorms or Burma’s rainstorms, just add to the problem.

Not to be outdone however, explosions contribute to the confusion as well, becoming obscuring distractions that cake the screen with red and black smoke. During some segments, most notably the Kowloon level, I was only able to spot enemies due to the muzzle flash from their guns. People drawn to the title for its appearances by the movie’s actors will likely be put off by the stone-faced, expressionless models and halfhearted lip syncing during the cut scenes.

Sadly, it’s more of the same from the sound department. Barring the main menu theme you’re unlikely to hear any other form of music in the title. Sure, it’s there, but it’s hidden behind a wall of gunfire, explosions and enemy yells. On top of that, every now and then one of the Expendables throws out a quip or comment that’s sure to be groan worthy.

Expendables are soldiers of fortune, guns for hire. Think The A-Team but add a tanker of testosterone and guns. In this outing they’re tasked with saving a Chinese billionaire who has been kidnapped. What follows is a guns blazing, explosion-filled globetrotting adventure that tries to keep the action going throughout. You get to choose one of four characters to play as, each with their own weapons and abilities. Waves of enemies will take a shot at you, and taking them down gives you the chance to turn their weapons against them and their friends.

It’s an all-out war most of the time, with tons of enemies dominating the screen, so turning the tide in your favour isn’t always easy. To help the gameplay along, there’s an upgrade system for each character, letting you improve damage resistance and movement speed, and also buff up your weapons to deal more damage. Battling on foot isn’t the only way do work in The Expendables 2 though, as the game breaks it up with vehicular sections that mimic arcade shooters as you blow anything and everything away. Other than the main game, you can also tackle Challenge mode, which pits you against small segments of the game’s campaign set to time limits (think time attack). You’d think the action-heavy Expendables and video games would be a natural crossover, but sadly that isn’t the case.

The first and biggest issue of Expendables 2 is that it’s just way too repetitive. Except for the vehicle shoot ’em up levels, every stage plays exactly the same. It becomes an insufferable cycle of shooting down wave after wave of generic enemies while completing brain dead objectives that are pointless to even set up as challenges. You’ll be tasked with challenges like “Get to the end of the bridge” or “Kill all enemies.” What else was I really going to do? I found myself looking forward to the vehicle segments, not because they were so good, but because at least they were different.

As if repetitive gameplay wasn’t enough, the game is also saddled with camera issues. It honestly just doesn’t know what to do with itself, zooming in and out at odd times, swaying to the left and right, and choosing a default eagle eye position that exacerbates many of the game’s graphical problems. There’s almost no reason to call them The Expendables at all, because at the distance most of the time you won’t be able to tell who’s who anyway.

The leveling system that should help takes way too long to make headway in, while still being player specific. Starting from scratch on a new character feels like some sort of punishment, and joining a game with a player already set to your preferred one sets this misfortune upon you. Have no fear though, if you’re not up to putting in the legwork and leveling a character yourself, you could always shell out some real-world money and purchase a fully-upgraded character from the marketplace.

War never changes, but The Expendables 2 Videogame could benefit from a few alterations, such as a better camera, more diversity and tighter aiming.

By Justin Redmon
This entry was posted on Tuesday, August 7th, 2012 at 10:21 am and is filed under Justin Redmon, Video Game Reviews. You can follow any responses to this entry through the RSS 2.0 feed. Both comments and pings are currently closed.