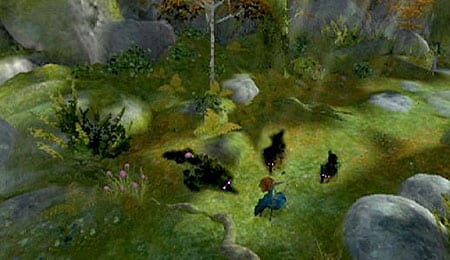 [Editor’s note: This, the site’s 3,000th post, is the first by Jeff Cater, who we welcome to the RotoRob family. Thanks to all our great writers over the years, and of course all our readers, for helping us reach this milestone.]

Recently released from developer Behaviour Interactive and publisher Disney Interactive Studios is Brave: The Video Game, which is based on Pixar’s latest movie to hit the digital projectors and parents’ pocketbooks. The story unfolds in 10th-century Scotland, where a blight has been placed upon Merida’s homeland and she must now take it upon herself to cleanse the blight along with the help of her mother, who has taken the form of a bear.

Brave’s controls are largely based on a twin-stick shooter scheme with platforming elements. Movement is controlled with the left stick, and Merida’s bow can be shot in a 360-degree rotation with the right. Tapping the left or right bumper will change what elemental force (fire, nature, wind or ice) is imbued into your weapons, and switching quickly between the variants is critical to the game’s combat.

Merida can double jump and is an agile lass, dodging with the left trigger and springing a flurry of attacks on enemies is a breeze thanks to the responsive controls. Combat is handled by using the “X” button to swing your sword, and the bow is handled with the aforementioned right stick. Smacking enemies around and taking damage fills up a power attack meter that can be employed to bring extra destruction to your attacks by using the “B” button.

Being rooted in a Pixar universe, Brave certainly has a lot to live up to visually. Though it definitely won’t trick anyone into thinking that they’re watching a movie, developer Behavior Interactive certainly made a beautiful-looking game. The lush forests are lively with flowers and grass that sway as you move through, sun diffusing through the thick branches above, waterfalls that you can almost feel the power of, and even a flurried tundra environment that reminded me of Skyrim’s northernmost parts.

Between levels, players are treated to cut scenes presented in the form of a semi-animated comic. Coming from the Pixar franchise, this decision is somewhat confusing as it’s not nearly as wowing as the movie or game even, but is an interesting interpretation on how to tell the story. Of the few spectacularly animated characters in the game, Merida is wonderfully rendered with a great expressive face and fitting set of movements.

Unfortunately, as pretty as the game is, it suffers from unexpected frame rate drops in some of the earlier levels when the combat gets thick. Though the graphics are very well done, the camera is often pulled very far back, which makes it very difficult to distinguish between some of the different enemy types early in the game before you’ve memorized their patterns.

Complementing the visuals of the game is an enthralling soundtrack and effective voice acting. Merida will throw out cute, witty quips every now and again that are pretty chuckle worthy, such as “Oof! Me legs are getting tired!” after completing half of a jumping puzzle. Thankfully, the one-liners don’t really get old and they maintain the personality of Merida throughout the game. The soundtrack swells perfectly when a fight is about to commence, and is appropriately suspenseful when contending with one of the game’s many jumping puzzles.

Brave is an amalgamation of a few different types of gameplay. We’ve got hack ‘n slash, twin-stick shooting and classic platforming all working in perfect cohesion to help Merida in her quest of cleansing the Stones of blight. Cleansing these Stones consists of traversing a level that generally has at least one jumping sequence, a puzzle featuring Merida’s little brother bear triplets and fighting baddies who want to steal your coins.

Slicing up bushes and defeating enemies showers the area with coins that are used to upgrade your attack strength, unlock new attacks and even improve the radius in which coins are drawn to your character. That was probably my favourite upgrade, as running a big radius to pick up every single coin dropped from an enemy kind of slowed the pacing. Scattered amongst the environment are miniature puzzles that yield new bows and swords, as well as costumes not seen in the movie.

Although this game is clearly geared towards younger players, adults will have fun as well. Brave features a neat co-op mode that allows a second player to take form of a wisp who can shoot arrows and attack enemies in aide. Also, dying in this game bears almost no penalty. If you happen to misjudge a jump and fall to your doom, you will automatically respawn where you jumped to your death with just a smidgeon of your health taken away. In the event that you succumb to the numerous enemy ambushes, the game will simply restart at a recent checkpoint before the encounter, which makes this easily accessible for youngsters.

In fact, you could almost pitch this game as a God of War title for children, as many of the same mechanics are in play. Certain weapons work more effectively against enemies, you can dodge and roll and perform powerful jumping attacks… though, truly, most platformers share similar features.

Although the gameplay can be considered a touch repetitive, it retains a fresh appeal by providing engaging cut scenes, warm visuals, heartfelt sound and fun puzzles and mini-games. With the unique co-op and witty Pixar banter, Brave will appeal to kids and parents looking for a friendly game to play together with minimal violence and an addictive button-mashing formula.

By Jeff Cater
This entry was posted on Monday, August 6th, 2012 at 2:15 pm and is filed under Jeff Cater, Video Game Reviews. You can follow any responses to this entry through the RSS 2.0 feed. Responses are currently closed, but you can trackback from your own site.