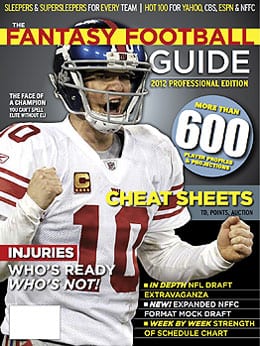 Featuring present and former RotoRob writers such as Herija Green, Buck Davidson, Andy Goldstein and Derek Jones, the 2012 Fantasy Football Guide also launched an online version this week, available here (if it’s not currently live, it will be any day now).

One of the biggest changes this year is the slick paper throughout the magazine. The pub looks much sharper and is better designed.

Another enhancement is an expanded mock draft that includes more round by round and team information. The Game by Game stats have been replaced by player summaries, plus information about where the player ranked in the mock draft, the rankings and in various scoring systems.

For those who loved the Game by Game stat grids, you can still find them online here.

Other features of the 2012 Fantasy Football Guide:

Don’t you dare think of heading to your Fantasy football draft without this tool. Look for the 2012 Fantasy Football Guide in bookstores near you.

By RotoRob
This entry was posted on Saturday, July 28th, 2012 at 1:38 pm and is filed under FOOTBALL, Magazine promo, RotoRob. You can follow any responses to this entry through the RSS 2.0 feed. Both comments and pings are currently closed.