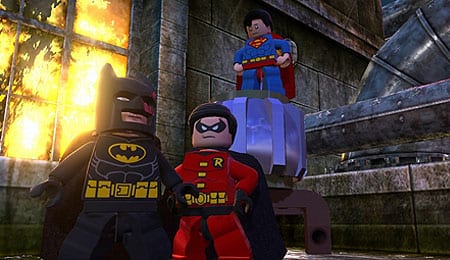 While third-party support for Sony’s PlayStation Vita hasn’t been great, Warner Brothers has certainly done its part with quality ports of Mortal Kombat and LEGO Harry Potter Years 5-7. Now it’s added LEGO Batman 2: DC Super Heroes to that list as the blocky caped crusader takes to the handheld to collect studs and battle evil (but mostly collect studs). It’s missing a few key features of its console brethren, but that doesn’t stop it from being a lot of mostly mindless fun to play.

Rather than force Vita functionality onto a basic setup, LEGO Batman 2 utilizes traditional controls almost exclusively. Everything is easy to control with “X” (jump) and “Y” (swap) each handling one specific task and the remaining two face buttons taking care of everything else, from punching and grappling enemies to building blocks. If there is a drawback, though, it is how clunky and slow ranged attacks feel. A hacking mini game has you sliding shapes with the touch screen, but beyond that the Vita’s capabilities aren’t even broached.

I write the following declaration with the full realization that I am a grown ass man: LEGO Batman 2: DC Super Heroes is an adorable game, particularly Batman himself. There’s something about his tiny cowl that is endlessly endearing. Add to that some cute cohorts and colour environments and you’ve got a delightful presentation. It isn’t going to push any envelopes, but there’s an undeniable charm in the melding of the LEGO and DC worlds that is sustained from start to finish.

Unlike other LEGO games, this one features a full cast to bring the story to life. The voice actors do damn fine work, too, further endearing the characters with lots of fun little moments and interactions — with Joker/Lex Luthor and Robin/Superman rating as my favourites. Fans of the older Batman (read: Michael Keaton) and Superman (Christopher Reeve) films will recognize the classic theme music worked into the soundtrack. It’s a nice touch even if it does become repetitive after a while. Additionally, there are some moments when the cut scene audio is so quiet it’s difficult to hear.

Perhaps the biggest surprise in LEGO Batman 2 is how enjoyable the story is as Joker and Luthor have teamed up to help get Superman’s nemesis elected President. Along the way, Batman and (primarily) Robin team up to battle a laundry list of the Caped Crusader’s most memorable villains. As noted, the strong voice acting does a lot to keep things moving as well as inject more than its fair share of humour into the proceedings.

Beyond the story, the gameplay even feels a bit refined. Sure, you’re still solving puzzles by busting blocks, rebuilding them and then swapping suits and/or characters to get the right mix of abilities to advance to the next area. However, they seem better integrated into the story than in past LEGO titles with puzzles — like finding key cards or transferring electrical current — that at least appear as though they belong in the flow of the levels.

One thing that hasn’t changed is the lack of difficulty. Deaths are still punished by dropping some studs and a perpetual hint system all but ensures you won’t be stumped for long. Plus, while the puzzles do feel more enjoyable they are still repetitive as you’ll be trying on the same handful of suits and using the same character powers from start to finish.

Even with that, the 14-chapter game should still take eight or nine hours to complete — as long as you spend time collecting studs. And, of course, that isn’t the end of the journey as free play allows you to go back and tackle levels with unlocked characters, which can access areas you couldn’t during the story. You can also find hidden cubes, collect studs to buy more characters and track down sound bites.

Unlike the Xbox 360 and PlayStation 3 versions, though, the Vita does not include the massive open-world sandbox of Gotham City. That’s a tough blow as the Bat Cave, which serves as the hub, and wave-based Justice League missions don’t make up for what’s missing.

If you’ve got the option, the console version of LEGO Batman 2: DC Super Heroes is the preferred one, but Vita owners shouldn’t write this off by any means as it still features the same charming story and is generally a lot of fun to play.

By Herija Green
This entry was posted on Wednesday, July 25th, 2012 at 11:07 am and is filed under Herija Green, Video Game Reviews. You can follow any responses to this entry through the RSS 2.0 feed. Both comments and pings are currently closed.