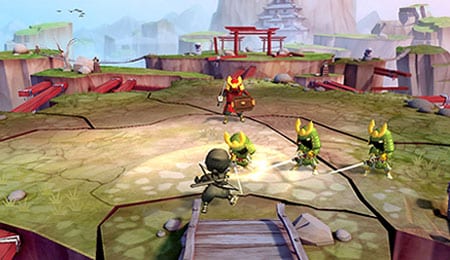 This is how ninjas play Red Light, Green Light.

When you think about how a ninja should look like and act, you probably get a specific image in your head. Possibly a silent specter, clad entirely in black, slowly creeping across rooftops or lurking in the shadows wouldn’t be too far off. Then again, maybe you can’t think of anything, because the ninja is too ninja to be seen even in your thoughts. Mini Ninjas Adventures by Side Kick LTD brings back the colourful cast of characters from IO Interactive’s game Mini Ninjas, taking them out of the shadows and into the spotlight for another game outing. The question is, does the limelight suit them, or are they more suited for the darkness?

Ninjas have to be precise, lethal and above all, coordinated — something that isn’t exactly easy to pull off on the Kinect in the first place. Moving left or right moves your character on screen, dodging attacks and also lining up your own. Using a few simple hand gestures changes weapons — for example, reaching over your right shoulder pulls out your sword, left takes out your bow and putting both hands out to the sides switches to ninja stars. Each weapon is used to take out enemies at different distances, utilized by mimicking the real-life action for each one.

Blocking is as easy as putting both your hands on top of your head, and a well-timed block can deflect certain attacks back to their user. You also have a super attack at your disposal, activated by simply saying “ninja” when a small meter is filled, prompting all your ninja buddies to hop in and lay the smack down on enemies for huge damage.

Magic, on the other hand, is a different animal. When you gain enough power you can activate spells, first by closing your hands together in front of you, which stops time and gives you a few moments to act. You then have three choices at your disposal, a lightning push spell, a lightning storm spell and also a devastating earthquake. When the controls work, they work great, with actions appearing almost simultaneously as you perform them.

Mini Ninjas does have a few troubled spots though. As with any Kinect title, picking up your actions runs into problems more often than you would care for, and all the repetitive actions on your dominant arm are sure to give you sore muscles in no time.

Now, the world of Mini Ninjas is one you might not be expecting. The entire game holds a cartoony aspect, hinging on almost being cel-shaded. There’s a lot of character in the game, and every environment lets you experience a little more of it. Each level is different as well with no repeats and no resets. As you progress, the land starts to take a drastic change from the bright, colourful areas at the beginning, to the darker, corrupted lands that your enemies have brought destruction to.

The enemy samurais you go up against look evil, yet because of the cartoony visuals and art style they still come out with a childish charm that makes them somewhat comical villains. The various cut scenes depart from the gameplay visuals and instead go with still images painted in an almost calligraphic tone, a theme that fits the overall feel of the game.

The soundtrack takes cues from the colourful and bright art style, choosing to go with a softer and more withheld theme for most of the game. Menus and cut scenes are backed with dulcet themes and soothing melodies. The narration of the cut scenes themselves are delivered in a clear, soft-spoken manner, which doesn’t go unappreciated. Your battles take a deviation from this however, choosing to go with a simple pounding of war drums in upbeat tempos that get the job done. Your enemies’ yells and grunts take on a cartoonish quality, further edging out their qualifications as an evil foe and more of a dark jester.

That being said, even though everything you see and hear is solid, nothing really sticks with you, and the overall experience is somewhat lacking because of it. A little more variety in enemy types and character design would’ve also been appreciated.

Mini Ninjas starts off with a story, one that puts you in the shoes of Hiro, a would-be ninja in training. Now, Hiro isn’t the biggest ninja, or the strongest, or even the fastest. One day, however, he stumbles across a talisman before training, and upon feeling its magic power give him strength he decides to take it to improve his skills.

As it turns out, the talisman was holding a nasty surprise, an evil warlord to be exact, and as Hiro completed his daily training, the talisman was drained of enough power to release the warlord back into the world. The warlord then promptly kidnaps all of Hiro’s ninja buddies and his teacher, leaving him all alone. From there, it’s a journey to rescue your captured compatriots and put the evil warlord back into his magical, jewelry-based prison.

Each level plays out pretty much the same as Hiro stands with his back facing the screen and his movement locked horizontally. Enemies appear in the distance and come towards Hiro to attack. When they do, they fall into one of three categories, and then by using a particular weapon you take out enemies in these areas. The farthest enemies are restricted to bow combat, second-tier foes require ninja stars and the closest are left to sword combat.

Enemies themselves aren’t too shy about what they’ll use to try to take you out. They wield not only bladed weapons and arrows themselves, but they also dabble in magic, bombs, poison and even the undead. Luckily, most enemy attacks can be turned against them with a quick block, or by lining up their attacks to hit friendlies in the back.

Along your journey you’ll run into trapped ninja teammates, who, upon beating the level, will join your team and add further potency to your Ninja super attack. Defeated foes will also throw out experience point pickups, allowing you to level up your stats. Magic and super attacks become more deadly, deflects become easier and critical hits happen more often, making your ninja all the more powerful.

Unfortunately, Mini Ninjas doesn’t do a lot to spice up the gameplay, eventually becoming a repetitive grind of slashing and shooting until the end. There are a few extra mini-games that you can undertake to break things up, but in reality they’re just glorified training segments with a few of Hiro’s abilities. As such they don’t do that much to change up gameplay from what you’ve already been doing.

Although Mini Ninjas doesn’t nail the ninja experience, it’s still a game well worth the time of Kinect owners. Those expecting considerable replayability might be somewhat disappointed, however.

By Justin Redmon
This entry was posted on Sunday, July 15th, 2012 at 9:19 am and is filed under Justin Redmon, Video Game Reviews. You can follow any responses to this entry through the RSS 2.0 feed. Responses are currently closed, but you can trackback from your own site.