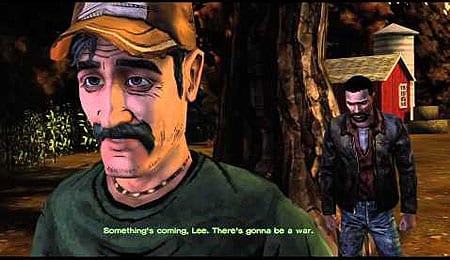 Who will you side with in the zombie apocalypse?

Note: The Walking Dead series looks, sounds, and plays the same from episode to episode. For a review of those series characteristics, please see our Episode 1: A New Day review. This review will only provide an overall score for Episode 2: Starving For Help.

When we last left our heroes — well, survivors or protaganists — Lee and Clementine decided to fortify an old motel with high-strung father and daughter, Larry and Lily, along with Kenny and his family. And, depending on whom you saved, either IT technician Doug or journalist Carley.

Starving For Help takes place a short while after A New Day, and it immediately re-familiarizes you with the tone and setting for Lee. Within five minutes, you’ll have to make a decision in a no-win situation (it involves other survivors, bear traps, zombies, and an axe). Shortly afterward, the true antagonist of the episode shows up: hunger. With rations running on empty and tensions rising between the group, Lee must make a series of critical decisions — how to divide up remaining rations, which group leader to show allegiance towards, and how to handle a situation when salvation seemingly arrives.

Of course, this is the zombie apocalypse, and there is no salvation. Starving For Help makes everything a difficult choice, even when deciding what to say. The story takes a Romero-meets-Hitchcock twist about halfway through, and if you’re like me, you’ll finish the whole three hours or so in one edge-of-your-seat session. Just like A New Day, gameplay involves more about selecting your dialog and actions in a bit of interactive fiction rather than a traditional game. However, the narrative is so gripping, so fraught with conflict and tension that the whole thing feels like a seamless experience.

I won’t give away what happens with the episode’s plot, as that will ruin the experience. However, I suggest that you do not re-load any decisions you make. As key decisions (dialog and action) are timed, the pressure is on, and you’ll sometimes say/do things you’ll regret. There’s no “perfect” way to play The Walking Dead, and that’s part of Starving For Help’s beauty — there are no right choices, so you might as well make your choice and stick with it. Once all five episodes are out, it’ll be worth replaying again with completely different choices.

As a game, Starving For Help is very limited. However, as an engrossing piece of interactive storytelling, it’s one of the best experiences around. If you’re a fan of the comic and/or the TV series, you won’t be disappointed; Tell Tale Games has followed up the magnificent A New Day with an even bleaker, more twisted Starving For Help. Gather any fellow zombie fans around to watch while you play — they’ll be just as engrossed as you’ll be.

By Mike Chen
This entry was posted on Saturday, July 14th, 2012 at 1:58 pm and is filed under Mike Chen, Video Game Reviews. You can follow any responses to this entry through the RSS 2.0 feed. Responses are currently closed, but you can trackback from your own site.