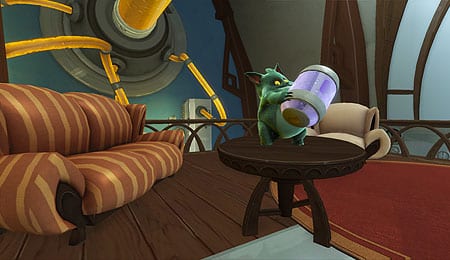 Get used to that couch — you’ll be seeing it approximately 4,271 times.

In spite of my love for all things sports and gaming, I am an intellectual at heart — or at least that’s what I tell myself when I’m kicking all kinds of nerd ass playing along with Jeopardy! at home. Thus, whenever my passion for gaming and thirst for knowledge can be combined, it’s a good day. Forming this Voltron-esque hybrid of edutainment is Square-Enix’s new puzzle platformer, Quantum Conundrum, which aims to captivate the Portal crowd with its dimension-swapping goodness.

Precision platforming and first-person perspective make dicey bedfellows at the best of times, and the sloppy jumping in Quantum Conundrum is a harsh reminder of that. I lost count as to how many times I fell off an object instead of leaping off of it… or somehow floated over a surface I seemed sure to land safely upon. It is easily the most maddening part of the game.

Notwithstanding the frustrating jump controls, the game handles very well. Switching between dimensions is easily done via the bumpers and triggers; there’s even a constant visual reminder of which shifts are available toward the bottom of the screen. It’s fast and responsive, allowing you to deftly swap dimensional properties on the fly.

Although there is a certain zany charm to the Quadwrangle Manor there is also an undeniably amount of repetition. The place stretches on and on, and you’ll be hard pressed to distinguish the areas seen at the beginning of the game from those at the end. It’s the same handful of books, furniture and paintings over and over again. Exploring the home of an eccentric inventor should’ve afforded ample opportunity to toss funny little gags and doo dads in there, but it never happens.

The actual level design is impressive, though once again you’ll be manipulating the same handful of objects from start to finish. Textures can also be slow to pop in, and there were times when doors took so long to open (I’m assuming they’re waiting for the next area to load) that I thought either the game had frozen or I’d failed to activate a switch. Visually, this is not an impressive showing.

There is only one voice heard throughout Quantum Conundrum, and it is one that will be familiar to fans of Star Trek: The Next Generation as John de Lancie (better known as Q) assumes the role of your uncle. He has some decent lines but ultimately isn’t very memorable, which, ironically, is a good way to sum up the minimalistic soundtrack.

We begin as you’re dropped off at the home of your uncle, Professor Fitz Quadwrangle. He was not expecting your visit and has a bit of mishap shortly after you arrive. The accident traps your uncle in an unknown dimension and temporarily strips him of his short-term memory as he cannot remember how he ended up there. The other, more interesting result is that the house is now stuck in a state of dimensional flux, and with Fitz indisposed it’s up to you to set things right.

That sets the stage for Quantum Conundrum, a puzzle platformer from designer Kim Swift, who was one of the original creators of Valve’s classic, Portal. However, there’s no portal gun this time; instead you’ll be equipped with an Inter-dimensional Shift Device (IDS) Glove that allows you to switch between the game’s four dimensions. The available dimensions are: fluffy (objects are lighter than normal), heavy (objects are heavier than normal), slow (time is slowed considerably) and reverse gravity (where, you guessed it, gravity is reversed).

It’s a smart setup that allows for some truly interesting puzzles as you freely switch between the various dimensions. For example, you may need to cross a chasm. To do this you enter the fluffy dimension to lift and then throw a safe over the gap. As soon as you release you switch to slow, allowing you the time to jump on top of the safe as it sails through the air. From there you may need to engage reverse gravity to get the extra boost needed to reach the other side… and so on.

My only real issue with the level design is that so few of them require (or even allow) you to make use of all four dimensions to succeed. It’s an odd choice as early on I felt as though I was building toward more complex puzzles, and that never really comes true. Quantum Conundrum continuously throws different puzzles at you, and it even combines strategies, but there aren’t any truly punishing ones where you’re forced to empty your arsenal.

Plus, as mentioned earlier, there are some frustrating issues with the jumping that will lead to roughly 95 per cent of your failures. The only good news on this front is that the game is exceedingly generous with in-level checkpoints, meaning that you’ll rarely lose more than 30 seconds worth of work. That doesn’t solve the issue, but at least it diminishes it.

All told the game covers 51 levels with an initial run time of around five hours. Of course, that number will fluctuate greatly as what stumps one person may be completely obvious to someone else. Each level also features targets for completion time and number of shifts, which could extend the experience considerably as the goals can be quite tough. Online leaderboards and hidden collectibles round out the package, and a “downloadable content” tab portends of possible future installments.

Repetitive visuals and aggravating jumping weigh Quantum Conundrum down, but the quality levels and puzzle solving comfortably trump those issues. Priced at 1,200 MS Points, this is a solid buy for anyone looking to flex their cerebral might.

By Herija Green
This entry was posted on Saturday, July 7th, 2012 at 1:05 pm and is filed under Herija Green, Video Game Reviews. You can follow any responses to this entry through the RSS 2.0 feed. Both comments and pings are currently closed.