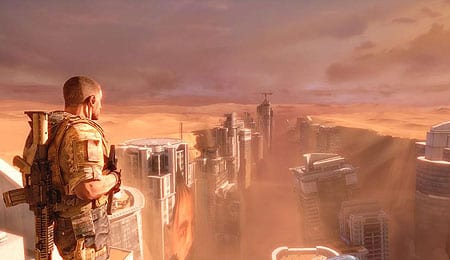 It’s up to you to discover who the real villain in Dubai is.

If one publisher has consistently stepped out of Call of Duty’s massive shadow to produce not just quality shooters, but unique ones as well, it’s 2k Games. With BioShock and Borderlands leading the charge, it has succeeded in releasing original takes on an oversaturated genre. 2k’s next entrant is Yager Development’s Spec Ops: The Line, a surprisingly dark tale that strips away the cool gadgetry of video game shooters in favour of the not-so-subtle reminder that war is hell.

Tight and responsive, the cover-based elements of Spec Ops are generally excellent. Vaulting over a piece of cover, then sprinting and sliding into another one is really cool and it works almost without fail. You can also shuffle between aligned pieces of cover with the touch of a button. The lone caveat when it comes to the cover system is that it can sometimes be difficult to get out of it quickly when an enemy drops a picture perfect grenade toss on your head.

All the basics — shooting, reloading, switching between weapons and grenades, etc. — are strong, and the game also implements a limited command system for your two A.I. comrades. By holding down the right bumper you can paint an enemy for them to target. It’s not as lethal as the similar option found in Ghost Recon: Future Soldier, but your squad usually gets the job done.

While the game starts amid mostly sand dunes and vehicle husks, the campaign takes you through plenty of wrecked opulence as you traverse the city of Dubai. There is a lot of impressive lighting as the city’s former splendour clashes with the drab, all-consuming sand that has overtaken it. Character models and detail work isn’t great, and the way your squad wears physical damage toward the end looks unnatural, but none of the shortcomings ever pull you out of the experience. Online play, however, does have issues with slow loading textures.

At first I was distracted by Nolan North in the role of Captain Martin Walker, and in the early stages it could’ve passed for lost chapters of the Uncharted series. By the time the credits rolled, however, any semblance of a connection to Nathan Drake had been long severed as Walker succumbs to the horrors he sees. North does a great job here, and even the way he barks orders and reacts to being shot as time goes by really helps sell the story. In addition to quality voice work, The Line also features a respectable soundtrack that smartly remains subdued when it’s time to reflect on your actions.

Dubai… shit… I’m still only in Dubai. Indeed, one needn’t look too hard to see Apocalypse Now’s influence on Spec Ops: The Line. You play as Capt. Martin Walker (a nod to Martin Sheen perhaps?), the leader of a three-man Delta squad sent to investigate a distress call from Dubai — a city thought to be dead after a cataclysmic sandstorm ripped through it. The source of the signal — Colonel John Konrad (perhaps a nod to Joseph Conrad, author of Heart of Darkness, which Apocalypse Now is loosely based on), a highly decorated leader whose 33rd battalion went in to evacuate civilians… and never came out.

What begins ostensibly as a search and rescue mission quickly devolves as the situation in Dubai turns out to be much different, and much worse, than anyone believed. Unable to contact command, Walker and his team find themselves trying to piece together the events that led to the current situation and sort out exactly where Konrad, the 33rd, the CIA and the local population fit in.

It’s an interesting story made all the more intriguing by the steady degeneration of Delta’s mental health. Whereas most games throw a horrific event at you and then toss you right back into combat, Spec Ops gives you time to contemplate what happened. It also creates friction within your team; no one is OK with what’s going on, and they struggle to justify their actions. Collectively those elements provide a stark contrast to other shooters, which proves to be Spec Ops’ greatest strength.

Combat isn’t quite as refined or polished as some other top-tier shooters thanks mostly to inconsistent enemy A.I., which can alternate between lethal and impotent. For the former, enemies are incredibly (and infuriatingly) accurate with their grenade tosses as they frequently root you out of cover thanks both to their precision and what seems like an overly generous amount of splash damage.

Conversely, your foes rarely push you in any other way as they’re content to fire rounds near you rather than using their numbers advantage to flank or suppress. There are certainly moments where you’ll appreciate that rather passive strategy given how heavily the odds often stack in their favor, but it undermines the realism of fighting trained soldiers in an otherwise gritty tale.

During the campaign you’ll be presented with a handful of moral choices, though here they do not affect how your mission ultimately plays out. Rather, it just serves to underscore that there are consequences to your actions, and that sometimes there is no “good” or “right” choice. Trust me: this is not a happy game no matter what you do. Plus, at roughly six hours, Spec Ops: The Line isn’t a long one, either. And while I’ll take quality over quantity any day, some may find the run time disappointing.

Although I’d consider Spec Ops a campaign-centric offering, there is a full online multiplayer as well, one which will look familiar to pretty much anyone that’s played online shooters over the past several years. Modes and maps are standard fare, as are the usual accoutrements such as more weapons, perks and armour types unlocking as you rank up. About the only thing to distinguish this from other multiplayer offerings are the occasional sandstorms that roll through matches, reducing visibility and knocking out your radar in the process.

Multiplayer is decent, though there are two notable drawbacks. One, the default movement speed is incredibly slow — so much so that moving from one section of a map to another without sprinting requires legitimate patience. Second, and more damning, is that I found myself repeatedly popping out of cover for no obvious reason, which is an absolute sin in a cover-based multiplayer. My best guess is that there is some slight lag that is somehow queuing up commands and thus sending me into and then out of cover. Whatever it is, it’s annoying.

In a genre where storytelling and emotion usually take a backseat to weapon options and elaborate set pieces, Spec Ops: The Line shakes things up with a story built around the costs of war. Its multiplayer may be nothing special, but the campaign is absolutely worth playing.

By Herija Green
This entry was posted on Friday, July 6th, 2012 at 4:07 pm and is filed under Herija Green, Video Game Reviews. You can follow any responses to this entry through the RSS 2.0 feed. Responses are currently closed, but you can trackback from your own site.