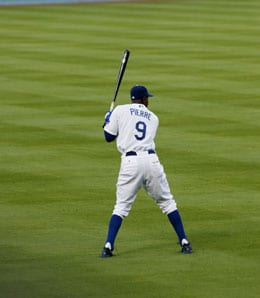 Juan Pierre may be confused about when to use his bat as opposed to his glove, but is having a nice comeback season.

Okay, considering how bad we slagged Juan Pierre heading into the season – ranking him 104th among all Fantasy baseball outfielders — we need to give him some credit, as the veteran has revitalized his career in Philly, and is playing at a top 35 level.

Pierre’s become a must-own NL-only league option, and is gaining plenty of traction as a mixed league option.

It’s early July and his OPS is 17 points higher than Adrian Gonzalez. Really?

Obviously, we’re making a comment as much about A-Gon’s down year than Pierre’s resurgence, but the point is made.

On Sunday, Pierre had two hits, including his fourth triple of the year, scoring both Phils’ runs in yet another loss for this club. He’s hit safely in four straight games and it’s a nice start to the month for a 34-year veteran who has been remarkably consistent in the first half, delivering OPSs of 705, 745 and 738 through the first three months.

In June, however, is when Pierre really started to flash his trademark speed. After swiping a pedestrian six bases in the first two months of the season combined, he went off for 13 thefts last month – and that’s what is driving the surge in his Fantasy value.

The run total is pretty lame (30 in 68 games), but he’s flashing a bit more extra-base sock this year and remains a solid bunter. Pierre’s walk rate is at its worst since 2007, but otherwise, he’s enjoying his best season since his final campaign with the Dodgers.

After going just 27-for-44 on the basepaths last year – one of the worst rates of his career – Pierre is 19-for-22, his best rate ever. He’s also hitting for his highest BA since 2004 (despite a slightly weaker batting eye) and his wRC+ of 114 is a career best.

As the Phils slide further out of contention, Pierre looks like a prime candidate to be dealt at the deadline. However, his bounce back season makes you wonder how bad off Philly would be without Pierre.

By RotoRob
This entry was posted on Monday, July 2nd, 2012 at 12:52 pm and is filed under BASEBALL, MLB Today, RotoRob. You can follow any responses to this entry through the RSS 2.0 feed. Responses are currently closed, but you can trackback from your own site.