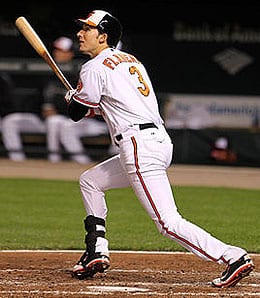 When we ranked Jimmy Rollins outside the top five among shortstops this winter, we suggested that the regression would continue. Well, that hasn’t necessarily been the case and we’ve got to give J-Roll some props here as he’s likely been the fourth most valuable shortstop in Fantasy baseball so far this season.

While he was hitless Friday, he still managed to draw a walk for the fourth straight game and steal a base for the second straight game, taking him up to 26 walks and 14 steals on the season.

The Phils may have been regretting re-signing Rollins after he got out of the gates so slowly (.235 BA, 554 OPS in April), but he’s gotten better and better since then and is having a huge run in June (20 runs, nine doubles, six homers, 16 RBI, 10 walks, four steals, 968 OPS).

The troubles he had early in the season, exacerbated by chasing too many pitches out of the strike zone, have been dealt with.

Really, since late-May, Rollins has been on a serious tear and with 45 runs in 76 games, he’s on pace for his best season in that department since 2009, which is a huge surprise given that mainstay Phillie boppers Ryan Howard and (until this week) Chase Utley haven’t been around to drive him in.

The recovery in Rollins’ power has also been pleasant for his owners as he’s already closing in on 30 extra-base hits. In recent years, he’s been a better second half player, so at this point, we recommend holding Rollins for the duration, unless you get an offer that simply can’t be ignored.

By RotoRob
This entry was posted on Saturday, June 30th, 2012 at 1:37 pm and is filed under BASEBALL, MLB Today, RotoRob. You can follow any responses to this entry through the RSS 2.0 feed. Responses are currently closed, but you can trackback from your own site.