MLB Today: Matt Cain Gets His Due 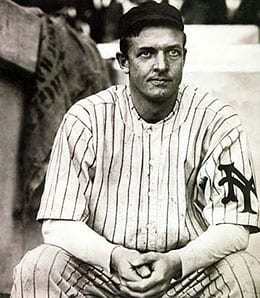 Not even Christy Mathewson ever had a perfect game for the Giants.

For several years, Matt Cain has quietly played the role of the No. 2 man in the San Francisco Giants’ rotation – a slot which generally does not earn the national headlines.

Sure, the team recognized his value, rewarding him with a big money extension just before the season started. But to the masses, Cain took a backseat to his more flamboyant and (generally) more talented rotation mate, two-time Cy Young winner Tim Lincecum.

Well, those days are over.

Not only is Lincecum struggling so badly that some are calling for him to be skipped in the rotation or to be sent to the bullpen, but Cain has taken his game to a new level this season.

On Wednesday night against the Houston Astros, Cain’s excellence finally manifested itself in something that will catapult him into the public eye – he tossed the 22nd perfect game in MLB history and the first in the long life of the Giants’ franchise.

Of all the great pitchers who toiled for the New York/San Francisco Giants – legends like Christy Mathewson, Juan Marichal and Gaylord Perry – no one had ever done what Cain just accomplished.

Since enduring back-to-back rough starts in May, Cain has been crazy good. In four starts, he’s given up just 17 hits, six runs (only two earned), one homer and six walks in 30 2/3 IP. Oh, and he’s struck out 34 over that stretch. Cain has now won each of his past seven starts.

Toss in the one-hitter he twirled at the Pirates earlier this season, and Cain owns two of the top three game scores for 2012.

No one will confuse Cain with a typical ace that’s capable of dominating opponents. After all, he doesn’t have an overpowering fastball, nasty Uncle Charlie or wicked slider.

Yet he employs his modest arsenal as well as can be, and Wednesday night, it helped him fan a career-best 14 batters.

Just like with almost every no-hitter, Cain got a little help from his friends. Melky Cabrera and Gregor Blanco both made superb catches in the outfield to preserve Cain’s shot at history.

Cain was splendid in April, logging plenty of innings early. Despite tremendous peripherals and a nice record, his May results weren’t as good, although he continued to rack up the innings. In June, Cain’s been filthy good, thanks to 30 strikeouts in just 24 IP.

When you look at the number of Ks Cain had in a perfect game, you have to consider this one of the game’s all-time pitching performances.

The sellout crowd at AT&T Park went ballistic when Cain finished off his season-high 125-pitch masterpiece.

Cain’s been among the most durable arms in the game, tossing at least 200 innings in each of the last five seasons, but he’s on pace this year to reach 244 IP, which would easily top his career high.

Clearly, the high innings count is not affecting him as Cain’s never been harder to hit since becoming a full-timer. His season WHIP is an off the charts 0.85 right now – best in all of baseball.

And for a pitcher that’s suffered with lacklustre won-loss records over the years – records that never seemed to suggest how well he had pitched – Cain is currently racking up the Ws like never before. The strikeouts are also coming at a much higher rate (9.1 per 9, which shatters his previous best). And best of all, the rise in strikeouts has not come with a corresponding rise in walks, as is often the case. In fact, Cain’s been way stingier than normal and his command right now is freaking unbelievable. A K-to-BB ratio of 6.0? Are you kidding me?

Meanwhile, it’s been pitching city, baby. We’ve not got five no-hitters and two perfect games and we’re only in mid-June.

By RotoRob
This entry was posted on Thursday, June 14th, 2012 at 1:41 pm and is filed under BASEBALL, MLB Today, RotoRob. You can follow any responses to this entry through the RSS 2.0 feed. Both comments and pings are currently closed.