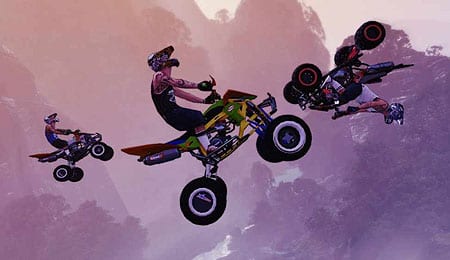 I can see my tribal tattoos from here.

Time to get dirty all up in this mug, bro! Ubisoft is bringing some mud-peeling, rubber-burning ATV action to the PlayStation Network and Xbox Live Arcade. And you know that shit is extreme, son! Its latest downloadable title, Mad Riders (from Dead Island developers Techland), totes big-time air stunts and high-speed thrills across a plethora of lush tropical tracks. So bust out the green power drinks and let’s see if this racer is sick enough to warrant all these bro-isms I’ve been throwing around the past few sentences.

There’s nothing complicated here, just straight-up arcade-style racing. Punch the gas with right trigger, use the left trigger to hit the brakes or ease into a drift and press “X” while steering during air time for stunts. During air time, you’ll need to tilt back or forward to shorten or lengthen the jump to ensure a solid landing — that is unless you like eating mud. Pull off enough fancy maneuvers and your turbo meter charges. Holding down square lets the juice loose and sends your four-wheeler into full throttle.

These ATVs are packing some major speed, and they’re relatively fun to control. But when you’re going as fast as you do in these tight tracks, there’s little room for error. If the physics were just a bit tighter, it could’ve spared the frustration of having the vehicle tip over repeatedly or take a swan dive into shrubbery after flying off a giant ramp. The overall loose controls don’t complement the intense speed, which keeps Mad Riders from being a supreme racer.

At first, watching these tracks in motion is quite a sight. This is a slick looking racer pushing impressive visuals in the downloadable title arena. You’ve got great environments and major detailing in the vehicles, all with a nice semi-cel shaded look that moves smoothly. But does the variety in locales and music selection impress? Eh, not so much.

With its high number of tracks, you’d expect potential for different layouts and roads to tear up. But after blazing through the first third of the game, it becomes clear you’re going to be looking at jungle dirt for a while longer. Maybe they’ll add a building, an ocean view or change the time of day, but it really looks the same all the way through. And with boring and forgettable dub step tracks failing to generate hype, an otherwise high quality presentation may have trouble luring gamers in.

The real bait in Mad Riders is the astounding amount of race content for such a small package. We’re talking 45 tracks of racing events in the single-player tournament, divided amongst eight locales with a mixture of modes such as standard race, stunt race and ghost trials. Placing third or higher in each earns stars, which unlocks the next bundle of events in an experience point /cash-driven campaign. Win or lose, your stunts and various achievements lead the way to bigger stunt abilities and faster vehicles with plenty of aesthetic customization options in both the vehicles and driver.

There is no denying that you can put major time into the whole campaign. While this sounds good on paper, there are big time “déjà vu” moments scattered throughout. Yes, there are 45 tracks, but I’d be very hard pressed to tell the difference between one track and another. The stages are generally very narrow and follow the same basic patterns and layouts. Chase a string of point coins for a quick boost charge, hit a ramp for a stunt jump and landing, then grab a shortcut coin to get the edge on the lead cars. No matter which section of events I was on, it felt like I was running the same race over and over.

Also, the chances of an angry airborne controller can be pretty high. Frustrating jumps into oblivion or into obstacles happen frequently thanks to the combination of slightly loose controls and uneven track design. The biggest source of my obscenities came from an antsy respawn screen that just couldn’t wait for you to remotely fudge up. There would be times when I’d pull a three-stunt combo in the air and seemingly pull off a close landing — yet a big title card of doom popped up telling me otherwise, breaking my flow and setting me a place back in the race. It’s a wild beast to control, but you do eventually get the feel for it.

Oddly enough, Mad Riders is still a bundle of fun, albeit short lived. Most racers usually have you work your way up to the high-speed classes while this one hauls ass right out of the box. Plus, its challenge has just the right bite, making you work for that first placement by employing every stunt, jump and boost to its fullest. The online multiplayer matches with up to 12 racers are decent, though they lack big options. There’s definitely room for improvement as DLC options suggest new tracks in the future. But they better come fast because whatever attention this title will gather is sure to burn out quick.

So maybe after a 12-pack of Mountain Dew, anything can be extreme. Even an okay game like Mad Riders can seem like the ultimate rush. But without the assisted stimulus of an overly caffeinated beverage, this downloadable title can’t keep the thrills going long enough on its own as it needs some control and level-design tweaks.

By Jess Castro
This entry was posted on Saturday, June 9th, 2012 at 3:01 pm and is filed under Jess Castro, Video Game Reviews. You can follow any responses to this entry through the RSS 2.0 feed. Responses are currently closed, but you can trackback from your own site.