Minor Matters: Adam Pettersen Picking it Up at Class-A 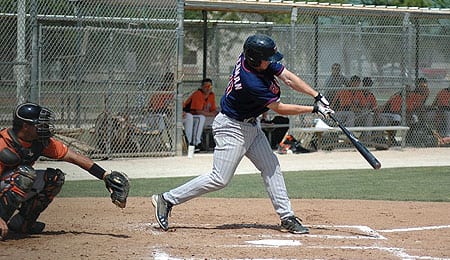 Adam “AJ” Pettersen, the Twins’ 25th round pick out of the University of Minnesota last year, has a ways to go if he’s ever going to be mentioned in the same breath as former Gopher greats such as Paul Molitor and Dave Winfield.

This is a program not exactly known for churning out tons of big league talent, although it sure hit a couple of home runs with those Hall of Famers. Other notable former Golden Gophers include Denny Neagle, Kerry Ligtenberg Greg Olson (the catcher), Brian Raabe, Dan Wilson, Brent Gates, Robb Quinlan, Glen Perkins and Jack Hannahan.

Pettersen was the Gophers’ MVP last year, and after signing with the Twinkies the shortstop didn’t miss a beat, showing an advanced batting at in the Rookie Appalachian League. He doesn’t have any extra-base pop – which he continues to prove this season at Class-A – and his contact rates have slipped, taking his OBP with it.

On the plus side, Pettersen seems to be adjusting to the higher level, notwithstanding a 1-for-6 effort Friday. Over the past 10 games, he’s batting a robust .323 with a very solid .361 OBP.

Pettersen impressed scouts with his speed and defense at the Cape Cod League in 2010, but even then it didn’t appear that he’d ever develop into more than a slap hitter whose offensive future was predicated on his ability to make contact.

By RotoRob
This entry was posted on Saturday, May 19th, 2012 at 2:41 pm and is filed under BASEBALL, Minor Matters, RotoRob. You can follow any responses to this entry through the RSS 2.0 feed. Responses are currently closed, but you can trackback from your own site.