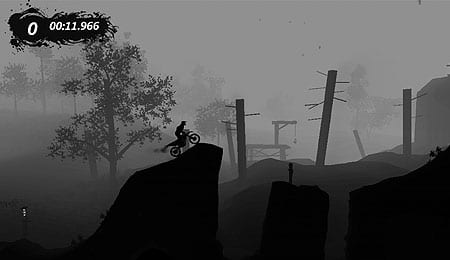 Xbox Live Arcade has been pumping out games recently, but Wednesday marked the beginning of another month-long run with one featured title per week. Known as Arcade NEXT, the promotion is bookended by a couple of serious heavyweights, starting with Red Lynx’s Trials Evolution. The follow up to Trials HD, one of the most successful games in XBLA history, Evolution takes everything its predecessor did well and does it better.

As complex and difficult as the courses become, the controls consist of accelerating, braking and shifting your rider’s weight on the bike — and outside of an occasionally used “bailout” maneuver, that’s it. This level of simplicity allows for dedicated focus on the obstacles standing between you and the completion of the course, which is something you’ll need as you advance.

Eschewing the enclosed stages of the original, Evolution shows off a lot more variety with courses taking place in grassy hills, industrial parks, sewage drains and plenty of other harrowing locales. Everything looks good with the game’s over-the-top physics taking centre stage as your bike is perpetually on the cusp of disaster with inevitable (and frequent) crashes sending your rider ragdolling through the air. That said, I wouldn’t quite throw this into the discussion for best-looking downloadable titles.

If there’s a disappointing element here it’s the audio. The soundtrack is dominated by soulless metal riffs that bring nothing to the table, and the yells of your rider as he’s thrown to yet another convoluted death get old fairly fast. At least the sounds of the bike are solid.

While Trials Evolution would most accurately be described as a physics-based motorcycle game, the tracks eventually become so elaborate it can feel like a platformer. Fear not, however, as one of the game’s most impressive qualities is its ability to cater to novice and hardcore players alike.

Early on you’ll tackle some runs that are very straightforward, yet still enjoyable. Completing one of them automatically earns you a bronze medal while the silver and gold varieties impose more stringent standards related to time and the number of crashes you can have. Progression is largely identical to any number of other games where more advanced tracks must be unlocked by acquiring medals. Each completed run also puts a few virtual bucks in your pocket, which can then be spent to customize your bike and/or your rider’s attire.

Along the way you’ll encounter a series of license tests that serve to introduce new techniques that you’ll be expected to know how to do moving forward. Successfully completing these tests also puts better bikes at your disposal, which makes scoring higher on the earlier levels much easier. However, in a content-rich package like Trials Evolution, the modest selection of bikes and limited customization options for gear is surprising and somewhat disappointing.

Fortunately, track selection is beyond reproach. There are seven circuits ranging in difficulty from beginner to extreme with dozens of tracks to tackle. A tournament mode is also available, though it just strings together existing tracks, along with an aptly named “skill game circus.” There you’ll do things like try to travel as far as possible on a near-empty gas tank or without shifting your rider. Even your trusty bike will be traded in for skis and more randomly absurd stuff.

As you progress, the difficulty goes from easy peasy to ‘are you freaking kidding me!!??!’ Seriously, once you get past medium things require a steady hand, nerves of steel and the patience of Job. I’m sure some will never conquer the later stages, but that’s not a big deal because there is so much additional content to satisfy more casual players. This goes back to that accessibility I mentioned earlier: the tools are there to just goof off and have fun, yet there’s also plenty of maddening challenges awaiting the more dedicated set.

Multiplayer is available as well, where up to four players can race simultaneously online or locally. The games were fun and the servers held up very well. It does feel fairly limited in scope right now, though that will undoubtedly expand as more tracks are created.

Speaking of which, a robust track editor also promises to extend the game’s lifecycle indefinitely with tons of options to build courses. It’ll take some getting used to, but you can rest assured the Trials community is going to pump out some impressive content in the weeks and months to come.

Playing user-created tracks is as simple as clicking the download button, and once you’ve had your fill, deleting it is just another button tap away. This level of user-friendliness infiltrates every level of the game, whether it’s watching a replay load in seconds off the leaderboard to study (or marvel at) or having the constant presence of your friends’ times challenging you to do better.

And therein lays the true genius of Trials Evolution. It’s the ideal “once more” kind of game where you come agonizingly close time and again. There’s no doubt that style leads to some frustration — I let more than a few profanities pass my lips when I’d watch my rider lose his balance near the end of what I thought was shaping up to be a great run — but it’s not enough to call it quits.

Well crafted, user friendly and undeniably addictive, Trials Evolution is the kind of game you’ll lose hours in — whether it’s trying to nab all the gold medals, one-upping a buddy or building a track. Even those of you that don’t think you’ll enjoy it should at least check out the demo; you may just be surprised.

By Herija Green
This entry was posted on Thursday, April 19th, 2012 at 9:01 am and is filed under Herija Green, Video Game Reviews. You can follow any responses to this entry through the RSS 2.0 feed. Both comments and pings are currently closed.