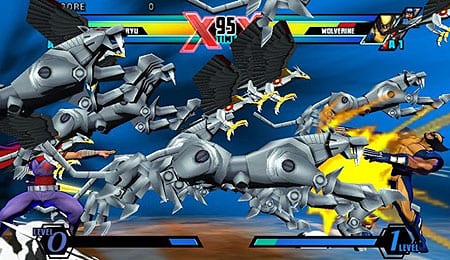 Years ago, I couldn’t believe my eyes when I ran into X-Men vs. Street Fighter in the arcades. The thought of two different worlds joining together seemed as surreal and exhilarating as having DC and Marvel characters within the same comic! Fast forward to 2011, and we see Marvel vs. Capcom 3 finally became available for both the PlayStation 3 and Xbox 360 consoles. It didn’t stop there, though. PlayStation Vita users can now also partake in the excitement with the release of Ultimate Marvel vs. Capcom 3. However, is the handheld port “ultimate” enough to keep fans happy?

The controls work very well in Ultimate Marvel vs. Capcom 3, as combos can be pulled off consistently without hiccups. A traditional layout with attack and character switches allocated to the face and shoulder buttons provide a familiar feel to Capcom fighter veterans. Plus, players that prefer the convenience of mapping “Hyper” combos and special moves to a particular button (wimps!) have that option as well.

The game also makes use of the Vita’s front touch screen. Swiping your finger in a direction will move your character while tapping on the screens will perform attacks — combos follow suit if you continue to tap. I wouldn’t consider using this exclusively if you want an authentic fighting experience, but it’s an interesting approach to incorporating the Vita’s potential to the game’s controls.

Ultimate Marvel vs. Capcom 3 manages to maintain its sharp and solid appearance through the amount of detail and colour design found in all aspects of the characters and battles. Everything from the combos, super moves and backgrounds look “marvelously” impressive. While there are moments of slowdown during Hyper combos, the frame rate drop isn’t that noticeable.

You get a huge variety of music here, which manages to keep the battles stimulating and dynamic. Furthermore, the attacks’ sound effects never sounded better with such clarity. And what Capcom game is complete without some cheesy dialogue? You get plenty of it here performed with nice voice acting. Some may be noticeably annoying, but it helps keeps the gameplay lively and humorous.

The worlds of Capcom and Marvel have clashed as the characters must join forces to save the Earth from Galactus… and that’s all really you need to know about the story so don’t expect any elaborate cut scenes outside of the intro.

You select a team of characters and engage in a three-on-three battle against either computer- or human-controlled opponents. In the Vita version of Ultimate Marvel vs. Capcom 3, you get a total of 48 characters to choose from. During battles, you can swap amongst your chosen characters, allowing the ones standing by to recover from the damage they’ve taken.

The battles are engaging thanks to a well-balanced setup. You can execute certain special attacks and Hyper combos once your Hyper meter is filled. There is also an X-Factor ability, which temporarily grants increased damage, speed and health regeneration when activated. Once you incorporate these during your battles, it’s combo after combo of everlasting fun that keeps brimming with entertainment even after repeated play.

Included in Ultimate Marvel vs. Capcom 3 is a training mode, which helps you get acquainted with the mechanics and fundamentals. In addition, there’s Mission mode from the console version that tasks you with completing a set of unique objectives for each character. A noteworthy exclusive addition to the Vita is the Touch mode, which changes the way the game is controlled (as mentioned earlier in this review).

While Ultimate Marvel vs. Capcom 3 for the Vita is as enjoyable as the console version, it also suffers from the same potential downfalls. If you play exclusively offline, there is limited variety in terms of the game modes available. And while having the game’s entire cast of fighters accessible from the beginning is convenient, it does remove the thrill of unlocking those characters. Without the motivation to gain new playable characters, gamers may lack the drive needed to complete the single-player mode repeatedly.

Of course, the real fun lies in the multiplayer. Here, the game supports both ad-hoc and online play. For the most part, it functions quite well over PSN for both ranked and non-ranked matches — and if you think touch controls are cheap, they can be disabled during multiplayer. I did experience some lag, but it was still generally stable and exciting enough be the highlight of the game.

Ultimate Marvel vs. Capcom 3 is definitely a “marvelous” title for the Vita due to its top-notch graphics, dynamic gameplay and familiar control scheme. While it may not be the most in-depth or lengthy title, it offers an entertaining handheld fighting experience that shouldn’t be missed!

By Uma Smith
This entry was posted on Monday, March 12th, 2012 at 8:09 am and is filed under Uma Smith, Video Game Reviews. You can follow any responses to this entry through the RSS 2.0 feed. Responses are currently closed, but you can trackback from your own site.