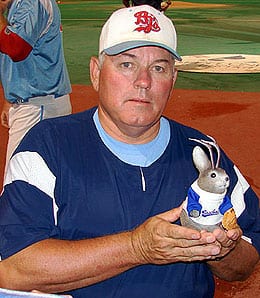 Mike Hargrove is in camp with the Indians as a special advisor — and he’s brought his bunny with him.

The Cleveland Indians were one of baseball’s biggest surprises last year, hanging around in the AL Central in the first half before finally fading down the stretch.

It gave hope to an organization that had struggled through back-to-back horrific seasons that a return to glory may not be far away.

To help turn that potential into reality, the Tribe has brought in several people associated with its big run in the mid-‘90s to try to inspire a young, improving squad.

Former Manager Mike Hargrove and stars Kenny Lofton and Carlos Baerga made an appearance at Cleveland’s camp Sunday to act as guest instructions (Hargrove is a special advisor to the team). Lofton and Baerga are also working on getting another of their star teammates from that era to come down and help out – someone that had a bitter divorce with the Indians. Yes, we’re talking about the fiery Albert “Don’t Call me Joey” Belle.

However, we’re going to have to question how wise a move this would be. After all, what are they going to ask Belle to do? Run instruction drills to help younger players learn how to run down trick or treaters, among other useful exercises?

As announced on last week’s Podcast, we’ve rebranded our Podcast, shifted times and moved to a full hour format. RotoRob’s Fantasy Baseball Weekly Podcast can now be heard every Thursday at 9 p.m. EST. Tune in here.

By RotoRob
Tags: MLB
This entry was posted on Monday, February 27th, 2012 at 2:58 pm and is filed under BASEBALL, MLB Today, RotoRob. You can follow any responses to this entry through the RSS 2.0 feed. Both comments and pings are currently closed.