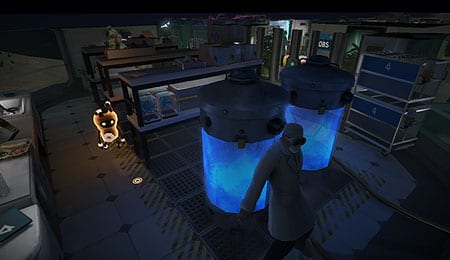 During its first two installments, Xbox Live Arcade’s House Party promotion (called Block Party in 2010) has produced some quality new games (Toy Soldiers, Torchlight) and a couple of sweet remakes (Perfect Dark, Beyond Good & Evil HD). This year’s nostalgia-free lineup kicks off with Electronic Arts’ Warp, a puzzle-based stealth title that attempts to incorporate many ideas into one cohesive game — the result is an at-times exciting but also uneven experience.

Hands down the biggest issue in Warp is the controls. The game wants you to nimbly evade guards and turrets, and teleport in and out of objects precisely, but it falls short due to the clunky implementation of its signature action: warping.

You control the alien entirely with the left analog stick (the right moves the camera so you can plan your actions), which means you’ll need to look in the direction you’re about to teleport. That wouldn’t be such a detriment if the game offered a full range of motion, but it doesn’t. So instead of being able to make subtle adjustments you’ll watch as the warp reticule toggles between positions roughly 45 degrees apart. That’s good if your intended destination rests at one of those eight points; not so much when you’re trying to warp between lasers.

Then there’s the “Echo” ability, which allows you to create a ghostly version of yourself that can be used to distract or lure enemies and later on to switch places with objects. Once you send out an echo your body stands still while you control the apparition. However, you’ve got a limited range and several things (bullets, water shields, lasers, etc.) can cause it to dissipate. At that point you immediately resume control of your body. This often results in cheap deaths since you need to get close to the edge to reach many places.

Lastly, any time you warp into an object you have the option to detonate it from within. Conceptually this is fun, especially with humans, but the game makes it a chore. Instead of using the triggers or holding down a face button, Warp makes you wiggle the left stick back and forth, ensuring that you’ll put as much wear and tear on your controller as possible. It’s a rough showing all the way around, and is something that undermines the game’s overall appeal.

Presented from a top-down perspective, Warp offers up an interesting mix of visual elements as the game’s cutesy look is combined with plenty of visceral bloodshed. Blowing up people from within causes blood to splatter everywhere, and those same humans have no qualms about putting a bullet through your head at any opportunity. Level design is solid, but there’s not a ton of variety as nearly the entire game is spent in an underwater facility. Cut scenes look a bit rough.

Musical accompaniment is sparse here with much of the game featuring little more than snippets of dialogue and ambient noise. There’s a focus on stealth throughout so having an understated score makes some sense; though it does leave things feeling a bit desolate.

Captured by humans for nefarious scientific purposes, you break free from your captors and now must find a way to escape the research facility where you’re being held. That’s the setup for Warp, which teams you with a floating orb that communicates telepathically to send you on a very direct “go from Point A to Point B” journey.

Initially you’ll only be able to warp in and out of objects and through thin walls. As you progress you’ll harness the powers of other detained critters to gain new skills necessary to get clear of your captors. Most notable is the aforementioned echo ability, which allows you to lure, distract or switch places with enemy troops as well as machines or barrels. A launch function that lets you fire objects across the screen rounds out your repertoire.

It’s a fairly modest skill set, but Warp does a good job mixing and matching what’s asked of you in regards to solving puzzles and outwitting patrolling guards. The game also provides some amount of flexibility when it comes to dealing with the 200-plus humans you’ll encounter as you can choose to kill all or (almost) none of them — a decision that not only bestows a handful of achievements on you but also different endings.

Beyond solving problems and avoiding gunfire you’ll also be on the lookout for grubs — Warp‘s version of collectible goodies. These pinkish creatures are apparently a culinary treat on your home planet, and they also allow you to upgrade your existing abilities. For example, you can increase your running and warping speed, decrease the sound you make, or even add a highly valuable trap where your echo form leaves behind a mine that stuns scientists and shielded foes alike. There are also film canisters to hunt down, though they’re strictly around to encourage exploration (and nab an achievement).

Despite lots of fun sections, the game does stumble more often than you’d like as deaths tend to cluster in areas where the sketchy controls aren’t equal to the challenge level. Nowhere is that more evident than in the final act when the location is changed and the developers decide they’ll start having the screen rock back and forth. Even with pinpoint controls such a change would’ve been unwelcome, but here you just get battered about into a lot of cheap deaths.

Your first trip through Warp should take around six hours depending on how much you explore — I played six and a half hours and found every collectible — but once you know the layout you can finish it much faster (under 90 minutes). There is no Game+ mode, however, so unless you really enjoyed your initial run the only draw to return is to pursue another of the game’s achievements.

Throughout the campaign you’ll find consoles that unlock the game’s challenge mode. It consists of eight trials that test your ability to master the various skills. With the exception of the final one they’re quite easy to complete and don’t last long. That leaves par times and online leaderboards as the carrot for attempting to improve your score.

Warp is tantalizingly close to being a top-tier downloadable title. It blends several fun elements together yet hamstrings gamers and tests their patience with sub-par controls. At 800 MS points it still warrants a purchase, but get ready to see the world “baking” an awful lot.

By Herija Green
This entry was posted on Monday, February 20th, 2012 at 2:23 pm and is filed under Herija Green, Video Game Reviews. You can follow any responses to this entry through the RSS 2.0 feed. You can leave a response, or trackback from your own site.