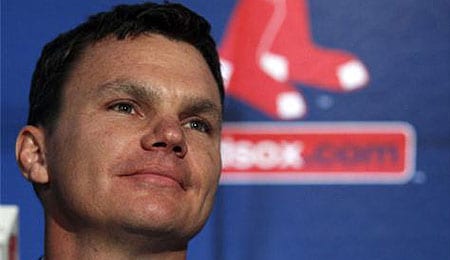 Can Ben Cherington lead the Red Sox back to the promised land?

Recently, I was asked to make another appearance on Alex Reimer’s Red Sox Podcast, Without a Curse, to talk about how an “outsider” perceived the Boston Red Sox 2011 offseason so far.

We examined several aspects of Boston’s winter of discontent, including:

Alex and I discussed what the Sox will have to do to get back to the playoffs this season and whether the organization as a whole can still be considered among the most progressive in the game.

My portion of the show comes in around the 18 minute mark and you can hear the Podcast in its entirety by clicking the play button below.

By RotoRob
This entry was posted on Saturday, February 18th, 2012 at 9:51 pm and is filed under BASEBALL, Podcast, RotoRob, Team report. You can follow any responses to this entry through the RSS 2.0 feed. You can skip to the end and leave a response. Pinging is currently not allowed.