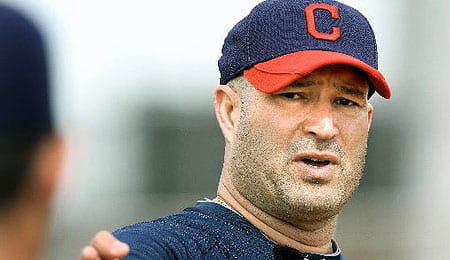 Here’s a tip for you big-league managers: when you’re scheduled to face the Cleveland Indians in 2012, make sure you jig your rotation so your left-handed starters are on tap.

That team Acta is referring to is the Tigers, of course, and he makes a good point. There just aren’t a lot of teams that can toss several southpaws at you, so kudos to Cleveland for essentially saying “screw it… we’re going to design our team to kick the shit out of righties.”

Back in early July, we remarked that Pat Burrell – only 34 at the time – seemed pretty much toast as a hitter. Well, following our cue, he opted to announce his retirement about a week and change ago, so we wanted to give the former Fantasy stud one last hurrah on the site.

Everyone always talks about how Chipper Jones has constantly been a thorn in the Mets’ side, what with those 48 career dingers against them and all. But did you know that Burrell hit just six less career bombs against New York? Not too shabby, considering he spent his last three seasons out of the NL East including one year in the AL.

After somewhat revitalizing his career in 2010 (in the wake of that miserably failed experiment as a DH for the Rays), Burrell was simply lost last year. He hit just .230, which isn’t a shock as he had a couple of seasons even worse than that, but combined with the lack of power, it was clear he was pretty much done like dinner. All told, in his 12-year career, Burrell played 1,640 games and wound up with 299 doubles, 292 homers and 976 RBI. He struck out nearly once per game (1,564 times) and chalked up a pretty fine career OPS of 833.

A former No. 1 pick overall, Burrell actually wound up faring pretty well compared to some of the flops that have gone first in the MLB draft (guys like Steve Chilcott, Brien Taylor and Danny Goodwin).

Last week, former reliever John Franco became the 26th member voted into the New York Mets Hall of Fame. Franco spent two-thirds of his lengthy career in a Met uniform, and while he wasn’t as good as those first six seasons in Cincy (where he made three All-Star teams and finished 12th in MVP voting in 1988), he did rack up 276 saves in 695 games in New York. His command was much after he went to the Mets and he did manage to make the All-Star team once and finish in the top 10 in Cy Young voting and the top 20 in MVP voting in 1994.

People automatically associate Franco as a Met, but what’s interesting is how much more he accomplished as a Red in less than half as long. To wit: he recorded a cumulative WAR of 13.5 in his six seasons in Cincy; in 14 years with the Mets, Franco’s total WAR was 12.8. You feel me?

Of course, it was his postseason success as a Met that blew away anything Franco did with the Reds. In 15 playoff games in 1999 and 2000, he recorded a 1.88 ERA and a WHIP of under 1.00 while earning two wins and a save. Franco never appeared in a postseason game with Cincinnati.

You may recall that Franco spent a partial final season with the Astros, but it was just plain ugly (7.20 ERA in 31 games)

Speaking of former Mets, I have been remiss in mentioning that our thoughts are with Gary Carter during this difficult time. Last week, it was revealed that his brain cancer has gotten much worse, and there doesn’t seem to be much hope.

I had the pleasure of witnessing all of Carter’s career, and while I was never a fan of his, I couldn’t help but recognize and appreciate the passion he brought to the game. A couple of weeks ago, I was reading an analysis of the best players (based on WAR) over the past 40 years or so, broken down into five-year periods. What shocked me was how often Carter showed up in the top five and the longevity of his run of excellence. It certainly gave me new appreciation for how superb a hitter he was and made me realize that, yes, he definitely deserved his Hall of Fame nod in 2003. I’m also glad that he earned that while he could still appreciate it because now Carter has more important things to worry about.

Well, Brad Lidge left the Phils last week for division rival Washington, so Philadelphia has plugged that hole by signing Chad Qualls. Qualls has definitely had his moments of glory and has also played the goat, but you’ve got to give this much to him — he’s a workhorse reliever. Over the last seven years, no reliever has had more appearances, and we all know about Lidge’s recent aptitude for durability. Qualls’ numbers with the Padres last season were definitely helped by Petco (2.09 ERA at home compared to 5.05 on the road), but that doesn’t explain his improved control. If he maintains that, he’ll be a useful addition for Philly. Besides, at one year for $1.15 million, it’s a prudent move, financially. Qualls also gives Philly another veteran reliever with some closing experience (51 career saves) should newcomer Jonathan Papelbon get injured.

Don’t forget to join Buck, Tim and I every Thursday at 11 p.m. EST for RotoRob’s Fantasy Baseball 365 Podcast, where we analyze the latest happenings in the world of baseball and let you know how it all affects your Fantasy teams. You can tune in here.

By RotoRob
This entry was posted on Tuesday, January 31st, 2012 at 1:18 pm and is filed under BASEBALL, RotoRob. You can follow any responses to this entry through the RSS 2.0 feed. You can skip to the end and leave a response. Pinging is currently not allowed.