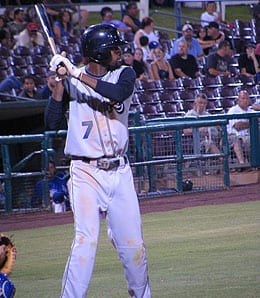 Will the addition of his brother P.J. Phillips convince Brandon to stick in Cincy?

A second round pick by the Halos in 2005, PJ has never made it past High-A, and missed most of the past two seasons because of a shoulder injury. He’s always been about speed, but simply has never made enough contact to take advantage of his wheels.

The 25-year-old hasn’t been a real prospect for a long time, so Reds’ fans are wondering whether this deal is a precursor to locking up Brandon, who will be a free agent after 2012, to a long-term deal.

Personally, I wouldn’t sign a 30-year-old second baseman to a long-term deal (well, longer than two, maybe three years), even if he was coming off one of his finest seasons. Brandon enjoyed his first .300 season and his isolated power bounced back slightly, but his speed continues its free fall. His last five seasons in the SB department: 32, 23, 25, 16, 14. Sure, he was once a 30-30 dude, but 20-20 looks like his upside now, and even that seems like a longshot.

The Mariners have invited Japanese infielder Munenori Kawasaki to Spring Training. The 30-year-old free agent desperately wants to play with Ichiro Suzuki, and while we’re not overly bullish on Kawasaki’s prospects as a major leaguer, perhaps his true Fantasy value will be in lighting a fire under Ichiro and helping the star outfielder rediscover his form. Other than the 40 steals last year, Suzuki was a waste of space.

Bobby Jenks’ health woes continue and we’re still months away from the season. He underwent a second operation on his back and probably won’t be ready for the start of Spring Training. Boston signed the portly pitcher to two-year deal last winter and is likely wishing it had a do-over on that move.

So all this talk that Carlos Zambrano was going to get another shot with the Cubs was just that – talk. It was obvious Chicago desperately wanted to rid itself of this clubhouse cancer and it was just a matter of finding a sucker. We all heard how he was working out like a madman this winter to get into better shape, and no doubt that was the team’s PR machine at work, trying to pump up Big Z as an attractive asset. Well, the Cubbies have found their sucker, and its name is Miami. Zambrano has been traded to the Fish for Chris Volstad, a pitcher who has occasionally teased us with his potential, but has mostly been majorly inconsistent. At this point, Zambrano’s potential is limited to how he can single-handedly destroy a team’s morale, so I’d say the Cubs made out like bandits here.

New Marlins Manager Ozzie Guillen is a friend of Big Z (I’m not sure I’m surprised those two get along), so let’s see if one fiery fucker can keep another in check.

By RotoRob
This entry was posted on Thursday, January 5th, 2012 at 2:59 pm and is filed under BASEBALL, MLB Today, RotoRob. You can follow any responses to this entry through the RSS 2.0 feed. You can leave a response, or trackback from your own site.