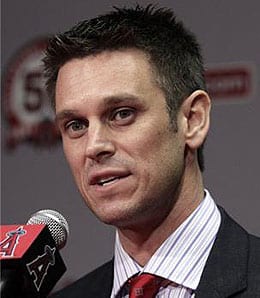 Remember how the Angels were slagged for their inactivity in the 2010 offseason? Damn, no one’s going to accuse them of standing pat this winter. Since hiring Jerry DiPoto as their new GM in late-October, the Halos have been baseball’s biggest players. First, they dealt pitcher Tyler Chatwood to Colorado for catcher Chris Iannetta, hopefully addressing a black hole, offensively speaking, in their lineup.

Then they acquired lefty reliever Brad Mills from Toronto for Jeff Mathis, getting rid of their excess catcher after the Iannetta deal. Mills adds to the organizational depth at starting pitcher, but he probably is no more than an emergency option at the big league level.

But that was merely a prelude to the really shocking moves. The Halos drowned out their thunder sticks and gave the Rally Monkey a coronary when they landed the biggest prize of all, signing first baseman Albert Pujols away from the Cardinals, inking him to a shocking 10-year deal worth $254 million. Ten years for a 31-year-old? Okay. But Phat Albert sure solves the Angels’ lack of punch issue in the short term, doesn’t he?

Not finished yet, the Angels then signed lefty C.J. Wilson, adding another superb arm to a rotation that already includes Jered Weaver and Dan Haren. And they also shored up the bullpen by adding LaTroy Hawkins.

LA’s offseason spending spree was reminiscent of the Yankees’ 2007 offseason when they signed CC Sabathia, A.J. Burnett and Mark Teixeira to huge-ass contracts.

Speaking of the 2007 season, when we did our draft preview that season we expected Andrew Brackman to be at the very least a top 10 pick. Well, he slid all the way to the last pick of the opening round, where the Yanks scooped him up. That must have been a portent, as he sure hasn’t lived up to the expectations, despite making his MLB debut last season with a few relief appearances for the Yanks.

Brackman has struggled horribly with his command and injuries and now looks like a long reliever at best. Do the Yanks have another Brien Taylor on their hands? Well, it’s not New York’s problem anymore after it declined Brackman’s 2012 option. The Reds – clearly desperate for pitching – signed him a major league contract. An MLB contract? Seriously? Well, the huge (6’10”) righty just turned 26 earlier this month, so you never know. Maybe he’ll figure things out in his hometown of Cincy and have a career. But I sure wouldn’t have given him more than a minor league deal.

The A’s great pitching purge continued Thursday as closer Andrew Bailey along with outfielder Ryan Sweeney were dealt to the BoSox for Josh Reddick and a couple of prospects. Go ahead and downgrade Mark Melancon, whose value plummets before he even gets a chance to throw a single pitch for the Sox. On the flipside, Reddick has a chance to be a real sleeper for the A’s, who are so desperate for offense and have a serious lack of outfield depth.

By RotoRob
This entry was posted on Thursday, December 29th, 2011 at 2:34 pm and is filed under BASEBALL, MLB Today, RotoRob. You can follow any responses to this entry through the RSS 2.0 feed. You can leave a response, or trackback from your own site.