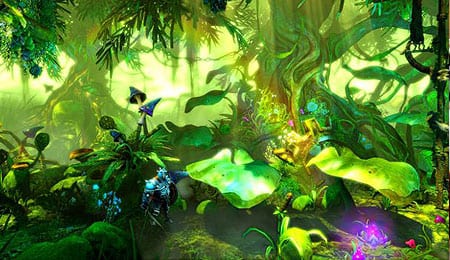 A lost production still from Disney’s Honey, I Shrunk The Knight.

As a staunch console gamer, I never played the original Trine, which was released on PC back in 2009, but after tackling Atlus’ Trine 2, it’s safe to say I would welcome a re-release. The sequel is a quality side-scrolling platform puzzler that features great graphics and brain teasers aplenty — not to mention the added bonus of a princess with the same name as my dog!

Each of the game’s three playable characters control differently, which can be a bit discombobulating when switching between them on the fly. For instance, the thief’s arrow attack is aimed and fired with the right stick, whereas the warrior defaults to a sword and shield setup in which that same analog stick is used to maneuver his shield. The more hours you sink into it, the more comfortable you’ll become with the various layouts, but it feels like the process could’ve been streamlined.

When it comes to responsiveness, though, Trine 2 does yeomen’s work whether you’re swinging around objects with a grappling hook or manipulating boxes and boulders as the wizard. And despite being a game about puzzle solving you’ll rarely feel like absolute precision is necessary to advance.

Visually, Trine 2 is an absolute treat. The environments are packed with detail work, none more spectacular than the lighting effects that give the game its unique look. It’s so richly rendered that you all but forget the action exists exclusively on a 2D plane as you move left to right across the screen to advance. There have been a lot of great looking games on Xbox Live Arcade and the PlayStation Network in 2011, and Trine 2 absolutely belongs on the short list for top honours.

Decent voice acting and narration breathes some life into the tale, though when compared to the graphics it cannot match up. Thankfully, the music is quite good and does a solid job of accompanying the lush environments without distracting from them.

A magical object known as “the Trine” brings together three heroes — a warrior, a thief and a wizard — to undertake a mysterious quest. The character’s purpose and motivations are left vague for much of the adventure with the group pretty well content to trudge forward come what may.

Most of the challenge in Trine 2 is of the physics-based, cerebral variety as you’ll constantly be asked to manipulate objects to reach new areas. The game does a nice job of varying the obstacles placed in your path with some as simple as stacking boxes to reach higher elevations while others demand multiple steps and a precise step-by-step approach to complete.

This approach is mostly enjoyable, though I found some of the more complex solutions made me feel like taking a break and starting anew later. Of course, the fact that I always wanted to return is a clear indication that the puzzle layout is well crafted. Within this puzzle solving you will also run into some platforming segments, most of which are straightforward with minimal (albeit occasionally time consuming) consequences for missing a leap or falling off a platform. And even when a character dies you can simply switch to another and return to the last checkpoint to resurrect the fallen.

While puzzle-solving platforming makes up the majority of the gameplay, old-fashioned combat has its moments as well as you’ll fend off creatures like orcs and giant spiders. These sections do little to get the blood pumping, however, and come off more as a change of pace than a legitimate challenging segment of the game.

Trine 2’s hook is that you need the three heroes’ exclusive skill sets to advance, which means that in single-player you’ll be switching between them repeatedly (and often in rapid succession). The warrior is the only character with melee strikes or defensive capability, and he can smash objects. The wizard can conjure objects and levitate them, as well as others found in the environment. The thief has a ranged attack, a grappling hook to swing across spaces and she can vanish temporarily.

What makes the approach even cooler is that there almost always seem to be multiple ways to get past a puzzle, and it’s up to the individual to discover how to advance. Plus, there are plenty of hard to reach orbs to collect that often require more advanced problem solving — the orbs serve to level up your characters, which unlocks additional abilities.

In addition to single player, up to three gamers can join forces in multiplayer. Here each person controls a single character and switches can only be executed when both parties agree to the swap. It makes for a truly co-operative experience as no one has the necessary skills to advance alone. And although the game doesn’t exactly change with multiple people, there are solutions and tactics that are only possible with more than one hero on screen. It can be a lot of fun as long as you’ve got a couple of willing and able partners.

Unfortunately, the game’s signature moments fail to live up to the high standards found in other areas, largely because these boss battles are built on the weakest aspect: combat. It’s much more challenging to reach a boss than defeat it. That, combined with a bland story, stands out like a sore thumb in an otherwise thoroughly engaging title.

Trine 2 is a great puzzler that undermines itself with humdrum combat and a dull story that’s told in bite-sized snippets between levels. Still, the ability to switch characters on the fly and potential for seriously original multiplayer makes it a great buy for those that want their brain teased.

By Herija Green
This entry was posted on Wednesday, December 28th, 2011 at 1:37 pm and is filed under Herija Green, Video Game Reviews. You can follow any responses to this entry through the RSS 2.0 feed. You can leave a response, or trackback from your own site.