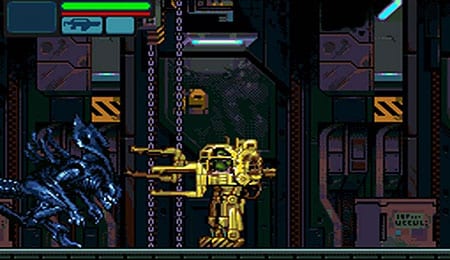 Get away from her you bitch!!!

As I undoubtedly mentioned when I reviewed the Alien Breed titles, I am a huge fan of the movie Aliens. It sits comfortably in my top five action films of all-time and is one of those flicks that I feel compelled to watch every time I come across it on cable even though I own the Blu Ray (and the DVD). Thus, when SEGA debuted Aliens: Infestation I was suitably pumped… until I realized it was on the Nintendo DS, a system that gets played only slightly more often in my home than a ColecoVision.

That it would be released on my least-played modern platform wasn’t going to stop me, though, and after an insanely busy November SEGA was kind enough to supply me with a belated review copy. So was it worth the hassle of dusting off my DS? Read on to find out.

All six of the DS’ buttons are used here with primary and secondary fire, jumping and evading mapped to the four face buttons. The left shoulder has you stand in place while aiming in any direction (in theory), and the right activates sprint, which drains your stamina meter. It’s a workable setup throughout the majority of the game as enemies mostly run right at you when they attack… mostly.

Where the game stumbles is during those rare instances when larger xenomorphs get through your initial bursts of fire as well as boss fights. The d-pad makes firing diagonally touch and go at best, and it’s also a struggle to separate from an enemy once it’s in tight with you. Using the touch pad to reload is a questionable choice — in the heat of battle you’ll need to switch focus to another screen and you cannot reload on the move, making you completely vulnerable.

As noted, the controls serve you well probably about 95 per cent of the time, if not more, but the issue is that they’re at their shakiest when you need them the most: boss battles.

Plenty of games incorporate the 8- or 16-bit retro look, but few do it with the impact of Aliens: Infestation, which somehow creates tension with tiny pixilated characters and static backgrounds. Both the colonial marines and aliens look authentic, and the animations are smooth. Each of the game’s playable marines has a unique look or pose, though in action they’re pretty much interchangeable.

Authenticity is front and centre on the audio side as well with much of the game accompanied by the quiet thump and high-pitched beep of the motion tracker (it activates when you open the map). The signature burst of the pulse rifle is also perfectly recreated. Unfortunately, though, the smart gun (carried by Drake and Vasquez in the film) sounds more like a generic machine gun and is also clearly recycling the shotgun reload effect. Musical accompaniment is understated but effective.

Set after the events of the film Aliens, Infestation follows a squad of colonial marines as they investigate both LV-426 (the plan from the first two movies) and the Sulaco (the ship that transported Ripley and company) to learn what happened. Of course, the Wayland-Yutani Corporation is taking a break from “building better worlds” to try to smuggle everyone’s favourite Xenomorphs back for study. It’s up to your four-person team to stop it.

From a gameplay perspective, Aliens: Infestation is a melding of games like Contra and Metroid to largely positive results. That means you’ll be exploring the same areas multiple times as you find new items that grant access to previously unreachable sections. In between tracking down keycards and wrenches you’ll be doing a lot of shooting.

Initially this is pretty fun with exciting moments like aliens bursting from ceilings and floor vents to keep you on your toes. Eventually, though, all that backtracking results in very familiar gunplay where you pretty much know when and where enemies will appear.

Boss fights are another matter entirely, however, as no amount of preparedness is likely to get you through one of these fights with all four members of your squad intact. And in Aliens: Infestation, when a marine dies they’re gone for good and it’s “next person up” time. Outside of your original four you’ll encounter up to 15 additional soldiers, though they can only join when you’ve got an opening (read: someone has been killed). That’s too bad as it would’ve been nice to jockey marines in and out based on personal preference.

Outside of said boss battles, Infestation is not a particularly difficult game as it seemed as though the majority of damage I absorbed was from acid spray. Occasionally an alien would penetrate my defense and land a few good shots, but with health packs and revitalizing save points sprinkled liberally throughout the game I never lost a soldier to a non-boss.

One of the game’s bigger disappointments is that exploration rarely bears fruit. In fact, the only tangible items you’ll find are weapon upgrades — automatically applied to the weapon you’re carrying — and stray marines, who as already noted will only join if you’re a solider down. Everything else, such as health and ammo, can be easily recouped by reaching a save room. The game also restricts you to one primary weapon at a time.

All told the campaign will run around six or seven hours, which is a respectable length. However, outside of unlocking a stylus version of Bishop’s knife trick there’s no reward or even a game-plus to entice you to make a second run through.

Although limited by the DS’ capabilities, Aliens: Infestation does a great job of capturing the feel of the iconic movie franchise and combining it with established gaming formulas. This is one title I’d love to see remade and beefed up for an Xbox Live Arcade or PlayStation Network release, but even as is it’s a strong pick up for DS owners.