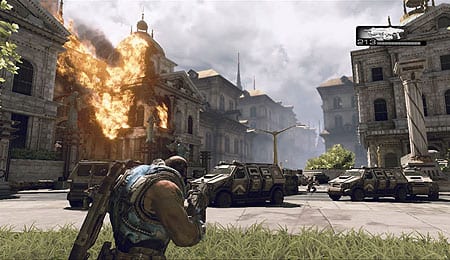 With Gears of War 3 effectively bringing the story arc of Delta to a close, it should come as no surprise that Epic Games’ inaugural extended campaign add-on acts as a prequel to the events of the first game. Dubbed RAAM’s Shadow after the Locust general that served as the boss in the original, this DLC will set you back 1,200 MS Points (US$15) and offers a five-chapter story that should take around three hours to complete.

RAAM’s Shadow takes place entirely within Ilima City shortly after Emergence Day, and it puts you into the COG armour of Zeta Squad. Taking over the primary role from Marcus Fenix is the bearded, balding and cigar-chomping Michael Barrick of Gears comic fame. He’s joined by a pair of familiar faces — Minh Young Kim from the original and Tai Kaliso from GoW 2 — along with newcomer Alicia Valera.

Even though the names have changed, everything about the gameplay remains the same as it’s still four-person cover-based combat with all the weapons and tactics you’ve familiarized yourself with over the years. That being said, it may feel like a change of pace for anyone who didn’t play the original, as the Lambent — a focal point in GoW 3 — are M.I.A. while the Kryll and Locust-spawning emergence holes have returned.

There is also one minor curveball when it comes to the gameplay with a pair of brief sequences that put you in control of General RAAM as he spearheads the siege of Ilima City. Unfortunately, these turn out to be something that sounded great on paper, but failed to click like you’d hope. RAAM is an overpowered plodder, his commandos appeared to be indestructible and he’s limited to just three attacks. It’s fun in spurts, but when you view the campaign as a whole it’s easy to point to the Locust sections as the low point.

Graphically, RAAM’s Shadow maintains Epic’s high standards for the franchise. The city of Ilima looks great and fits perfectly within the game’s mythos. I particularly enjoyed seeing a more human side to the locations with a high school and a bank among the destinations. I did notice a few instances of objects vanishing, and things like Jack facing the wrong direction while he’s supposed to be ripping a door, but there’s no questioning the presentation value here.

In terms of story, there isn’t a lot to sink your teeth into. Zeta Squad is under orders to help evacuate civilians from Ilima City and relieve any Locusts they find of the burden of living with extreme prejudice. And that’s about it. Outside of an origin story for Jace Stratton, character development is practically non-existent, which is a shame since there was an opportunity to flesh out some secondary players from previous games. Instead, Kim is still a by-the-book soldier while Tai spouts off spiritual-sounding one-liners.

I’d also suggest that for a prequel set near the start of The Locust War, everyone seems far too comfortable with the phenomenon of monstrous creatures emerging from underground. They all know exactly what each Locust is by name, and at one point Barrick even suggests that he’s looking forward to meeting General RAAM. It was one thing for a war-weary Delta Squad to treat these things as old hat; it’s another for Zeta to have such a “been there, done that” attitude toward the burgeoning Kryll storm that’s going to wipe out life in the city.

Despite some missed opportunities in the narrative, RAAM’s Shadow is a throwback to the original Gears of War with intense firefights offset by moments of genuine tension. There’s enough here for Gears fans to justify the price tag.

By Herija Green
This entry was posted on Thursday, December 15th, 2011 at 11:47 am and is filed under Herija Green, Video Game Reviews. You can follow any responses to this entry through the RSS 2.0 feed. You can leave a response, or trackback from your own site.