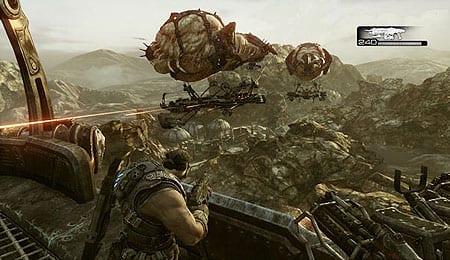 Sadly, barge combat in Gears of War 3 does not include sarlaccs.

In late 2006 I was looking for a reason to buy an Xbox 360. The release of Epic Games’ original Gears of War provided it. From visuals to action it was everything I wanted a “next gen” title to be, and to this day it still occupies a place of honour on my top shelf. My love of the series ensured that the release of last month’s Gears of War 3 would be greeted with a mix of emotions. I was excited for more time with Delta but saddened that it represented the conclusion of the trilogy.

You can never say never in the gaming world — Halo 3 was supposedly the end of the Master Chief’s saga — but should this prove to be Gears’ swan song, it definitely goes out with a bang.

I’ve long considered the Gears of War series to be the standard bearer when it comes to third-person shooter controls. And since Epic has smartly been content to make minor tweaks, like smoother roadie running and different active reload points, its third installment plays great. My lone gripe is the removal of the 180-degree turn you could do when rolling. It might have been a cheap tool for online play, but I miss the ability to quickly evade and switch focus during the campaign.

Stunning, envelope-pushing graphics have been a staple of Epic’s trilogy, and that maximization of the Xbox 360’s capabilities is once again on display in Gears of War 3. The campaign travels a diverse path and offers glimpses of some very different parts of Sera, including things like decaying cities, tropical islands, desert caverns and even lavish hotels. Despite a darker tone to the story there’s actually a lot more vibrancy when it comes to use of colour and nature here.

Exaggerated character models are back and looking smoother than ever. There are a lot of cool little bad ass touches, like scraping the massive butcher blade across the ground during a roadie run, and the weapon-specific executions are brutally satisfying. Explosions have great visual impact, and as always there’s a ton of blood and gore to be found. It’s just a very impressive looking game.

On the audio side, the cast of characters you’ve come to know and love are back with their gruff voices and testosterone-filled, profanity-laced dialogue. Ice-T makes a guest appearance, but unlike Ice Cube’s turn in Black Ops I never found myself distracted by his inclusion. Everything else — the screams and grunts of the locust, the audio punch of weapon fire, the swelling orchestral soundtrack — is excellent and helps to make Gears of War 3 a treat for the senses.

Picking up about 18 months after the sinking of Jacinto, things have gone from bad to worse. The COG has been effectively disbanded following the disappearance of Chairman Prescott, and our merry band of Gears (Marcus Fenix, Dominic Santiago, Damon Baird and Augustus Cole) now call the massive carrier Sovereign home. After having their underground caverns flooded, the Locusts have all but vanished, giving way to the Lambent as humanity’s top foe.

While the first two games were somewhat limited in scope, Gears of War 3 is a sweeping tale that goes about answering questions and wrapping up loose ends. I’m not suggesting this is Pulitzer Prize winning stuff, but there’s a lot more depth of character revealed here. The long struggle for survival has taken a massive toll on everyone, and rightfully so. Fatigue and hopelessness are palpable, which makes their decision to eventually go all-in on a high-risk mission to be not only understandable but logical.

Progressing through the story itself will be familiar to any seasoned player. There are a few unique moments during the campaign as well as some new weapons and gadgets (like the Silverback armour) thrown in, but no game changers. Then again, fans weren’t clamouring for substantive changes to the cover-based shooter so it’s understandable that they not try to reinvent the wheel.

What is new about the campaign is the ability to have friends play not only as Dom, but as the third and fourth characters in your party. And despite usually competent friendly A.I., it’s undeniably cool to have three human-controlled players watching your six, particularly on higher difficulty settings. As someone that finished both Gears and Gears 2 on normal through insane (six total playthroughs), Gears 3 offers up tougher combat and smarter enemy A.I. than its predecessors. The five-act campaign was well paced and took around 10 hours to complete.

As big of a fan as I’ve been of Gears’ campaigns, I’ve never found my stride with competitive multiplayer given its dependence on rolling around and firing shotguns at each other. Unfortunately, that aspect hasn’t made any marked changes. There are some new tricks when it comes to modes, but seemingly every game I entered devolved into the roll and shoot fests of old. If that’s your thing then you’ll love the multiplayer once again. For me, though, it represents the game’s unquestioned low point.

Conversely, Horde was a fantastic addition to the last entry — one that I sunk literally hundreds of hours into over the years. Epic aimed to build upon that with Horde 2.0, which maintains the original’s addictive 10-wave cycle and adds tower defense elements and boss fights. Each kill earns you money, which can then be used to purchase things like barbed wire, turrets and target dummies.

In addition to your kill cash, the game also offers incentives during waves to supplement your earnings. For example, you might be tasked with executing a certain number of enemies or getting headshots to score a big bonus. Viewed collectively there have been quite a few changes to the Horde formula, but despite that it never loses the essence that made it so much fun.

Joining Horde in the co-operative multiplayer realm is Beast Mode. Here, roles are reversed as you’re cast as attacking Locusts that must wipe out the Gears. Each Locust costs a specific dollar amount to spawn and offers a unique set of abilities. As you kill more enemies, additional tiers of increasingly powerful Locusts become available while simultaneously the Gears add more and more boss characters that must be executed to win. With just 12 rounds available, Beast Mode lacks the staying power of the other multiplayer offerings, but it’s still pretty fun.

Games don’t get much more content rich, intense or slickly produced than this. If you own an Xbox 360, Gears of War 3 should be in your collection. If you don’t, this is the perfect excuse to get one.

By Herija Green
This entry was posted on Monday, October 17th, 2011 at 12:05 pm and is filed under Herija Green, Video Game Reviews. You can follow any responses to this entry through the RSS 2.0 feed. You can skip to the end and leave a response. Pinging is currently not allowed.