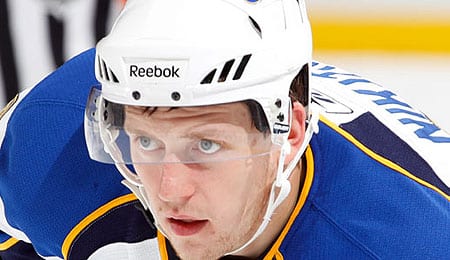 Nikita Nikitin has been piling up the points since getting dealt to the Jackets.

It has been another tough week for Fantasy hockey owners. When you see the injury totals climbing past 130 and upwards of 140, the alarms get louder. Take a look at the latest injury report from TSN for a second. Now, while some teams have remained healthy (Boston Bruins, whose only injured player is Marc Savard), there are several teams with at least seven players hurting or out going into Week Nine. Teams like Winnipeg, Montreal, and Dallas in particular have really had to scramble frantically in order to fill their rosters while remaining competitive.

Nikita Nikitin, D, Columbus Blue Jackets: Less than a month ago, Nikitin was dealt from St. Louis to Columbus and magically has started scoring. Now, his +/- is not going to ever wow you but eight points in 11 games is certainly not too shabby. There are just going to be nights when Columbus gets blown out of the water (like against Edmonton on Friday) but sometimes to get, you have to give. Nikitin is now averaging over 23:00 ATOI, plus he is owned in less than 10 per cent of all Fantasy leagues which means the buzz has not quite reached the masses just yet. Get in on him while the price is right.

Kyle Brodziak, C, Minnesota Wild: Brodziak has quietly played very well during Minnesota’s hot start. What may be more surprising in how the Wild has done it with timely scoring, elite goaltending, and solid two-way play. Brodziak’s ice time has spiked to upwards of almost 20:00 per game over the last eight contests. Furthermore, he has nine shots on goal and three goals in the last two games. Brodziak’s penalty kill and power play time have risen as well.  The ownership rate is just below 5 per cent in all Fantasy leagues. What are you waiting for? Move fast!

Colin Wilson, C/LW, Nashville Predators: Nashville has a nice young crop of players who can put some pucks in the net. Wilson has 15 points in 25 games, but put together a nice November (seven points and +3 in 13 games) while hardly being owned by anyone (around 1-to-2 per cent in leagues). People do have to realize what Wilson and Craig Smith make a fine line duo that owning half of would be wise. There is clear chemistry here and people need to notice this quickly.

Jason Chimera, LW, Washington Capitals: The time to get Chimera is now as he is getting consistent second line minutes via the power play and top six forward ice time for Washington. New coach Dale Hunter seems to like Chimera’s level of intensity and he was rewarded with almost 21 minutes of ice time on Saturday against Ottawa. Ownership rates are going up in the 10-to-15 per cent range, but are still relatively low. That is going to change after this week. It is very clear that Chimera’s four goals in the last six games is not by accident. He gets in areas that most do not dare to go and that is good news for Fantasy owners.

Well, that does it for this week. As always, we take on all questions because none are too big or too small. You can follow us on Twitter and thanks again for reading.

By Chris Wassel
Tags: Colin Wilson, Jason Chimera, Kyle Brodziak, Nikita Nikatin
This entry was posted on Sunday, December 4th, 2011 at 2:17 pm and is filed under Chris Wassel, HOCKEY, The Wire Troll. You can follow any responses to this entry through the RSS 2.0 feed. You can leave a response, or trackback from your own site.