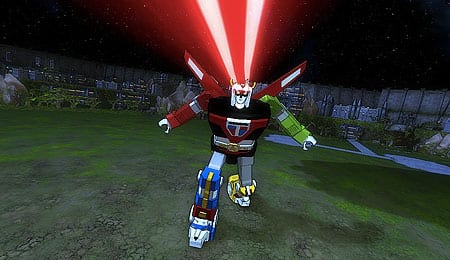 “It’s good to know that wherever there is oppression or injustice throughout the galaxies, there is one thing we can always count on to right those wrongs.” If you’re familiar with this line, then you know who it refers to. However, for those of you that just tuned in let me bring you up to speed. Back in the 1980s, Voltron was very popular for its toys and cartoon series, which featured a team of young pilots whose vehicles formed one giant-ass robot.

Now if you really enjoyed this awesome cartoon series during your childhood, then it’s time to get crazy as your beloved super robot has been revived in video game form. Thanks to THQ, Voltron: Defender of the Universe is landing on Xbox Live Arcade and PlayStation Network — but will this title have what it takes to satisfy fans that grew up arguing over which lion was the best?

There are three different control schemes in Voltron: Defender of the Universe. In lion mode, you move your character with the left stick while shooting and aiming with the right. In addition, you perform special attacks with the left trigger, pounce with the right and melee attack using either shoulder button. Space mode has the same control scheme as lion except that now the right trigger is used to roll while the shoulder buttons don’t perform any functions. In either situation, the twin-stick handling is effective and responsive with the button layout being easy to get used to.

During Voltron mode, you select your actions with either the left stick or d-pad and perform them with the face buttons. It can get confusing when transitioning between modes, but essentially the controls are straightforward and simple once you get over the learning hump.

Graphically, the cel-shading looks pretty bland while the environments appear ordinary for the most part. This does not apply to the space missions where the backgrounds are impressive. Unfortunately, once the number of animations and action on screen start to add up, the frame rate suffers. The video sequences consist of clips from the cartoon with the quality being maintained from the original. Getting to see such footage is refreshing as it conjures up wonderful memories of the entertainment many of us came to love.

Where Voltron: Defender of the Universe redeems itself is in the audio. The sense of nostalgia will kick in during your gaming experience as voices are provided by the original actors from the cartoon series. Additionally, the soundtrack fits appropriately to the presentation with its ’80s style. One clever detail worth noting is when you pause the game you’ll hear the narrator, Peter Cullen (AKA, Optimus Prime), say “Voltron will return after these messages.” This underscores the nostalgia element that THQ has added to the title.

Voltron: Defender of the Universe is basically a twin-stick shooter in which you can have up to either two players locally or five online participating. Players take control of the five robot lions, each with its own special moves that can be executed when enough hidden star pieces are acquired. If your health is completely depleted, the pilot will be forced to come out for 10 seconds while the lion reactivates itself. During this window, he or she is left vulnerable to immediate death, which adds some challenge to the table.

You’ll either travel across land or fly through outer space as your carry out your objectives. Whether you’re getting your lions to pounce onto enemies or using the gun turrets to blast them away, you’ll get some satisfaction. However, you may find that the gameplay follows the same formula as you progress from one chapter to the next. This speaks to a degree of variety that I must say can be lacking.

At every fourth level, you will be tasked with shooting down the Robeast after which Voltron begins to form. During these boss battles, the gameplay changes to a turn-based system where you’ll get to choose and execute your attacks as well as dodge your enemies’ blows.

With three chapters in total and four levels in each, Voltron: Defender of the Universe checks in on the short side. This can be quite disappointing, especially to those who aren’t familiar with Voltron. However, the multiplayer feature does help compensate for these shortfalls thanks to the enjoyment associated with the completing missions in co-op.

The short content and sub-par quality in graphics may be a turn-off, but an overall presentation that stays true to the original series makes up for that to a degree. For 800 MS Points (US$9.99), Voltron: Defender of the Universe may not necessarily be suited for everyone, but fans should consider it if they want to revive this cartoon legend.

Want a spiffy Voltron mask for your Xbox avatar? Well, then post a comment here telling us which lion is best (Red, Green, Yellow, Black or Blue) and include your @Twitter name or use a proper e-mail address if you’re not on Twitter. We’ll pick one at random on Monday, December 5. Good luck!

By Uma Smith
This entry was posted on Friday, December 2nd, 2011 at 1:16 pm and is filed under Uma Smith, Video Game Reviews. You can follow any responses to this entry through the RSS 2.0 feed. You can skip to the end and leave a response. Pinging is currently not allowed.