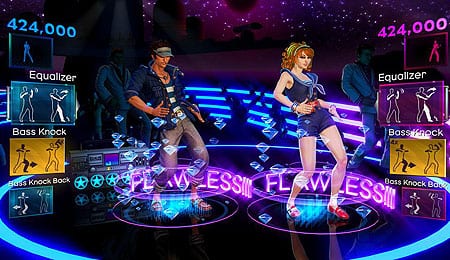 No furniture or bones were broken in the making of this review.

Just recently, I upgraded my Xbox 360 with the controller-free Kinect to catch up on what I’ve been missing for a year. And what better way to kick off my new experience than with Harmonix’s follow up to its acclaimed Kinect launch title, Dance Central. Being a huge fan of Harmonix’s Rock Band series, I felt it can do no wrong with Microsoft’s gadget. So read on, b-boys and b-girls as I dive into Dance Central 2!

Each song found in Dance Central 2 has willing and able dancers mirror the dance moves of their chosen character with cue cards giving them a heads up of which step is coming up next. Dancers are scored based on how accurately you perform the moves. To assist in hitting the dance choreography correctly, a visual representation of the gamer’s body movement is also visible. As long as they’re willing to dance the fool in front of the TV, anyone from newcomers to seasoned pros can jump in and have a total blast.

Dance Central 2’s accuracy in reading your body’s entire movement seems very spot on. There was seldom a moment where I felt misjudged; I knew more or less which dance moves I nailed or flubbed, and I was ranked accordingly. The rare touches of confusion in body recognition came in two-player mode, but honestly, I was rather impressed on how well it picked up what I can embarrassingly call “living room chaos.” Menu navigation is smooth and voice activated commands are a nice touch.

Slick graphic design, sharp looking characters and hype dance environments show the great polish and care that went into Dance Central 2. It’s simply magnetic and attention grabbing; it’s almost as entertaining to watch the screen as it is to watch your pals tear it up as you wait your turn. Almost — after all, you can’t make fun of the TV, but you can make fun of your friends.

The music selection is as diverse as a dance game can be even though the majority of the tunes hail from this past decade. I’m not afraid to admit I would have liked a few more Humpty Dance era tunes. If dance music is your garlic and holy water, you’re probably already avoiding this game like the plague. However, as much of a crowd pleaser as Dance Central 2 is, the game’s sights and sounds will undoubtedly turn off some with its pop music fierceness.

The most hyped feature of Dance Central 2 is the addition of a two-player option with co-op and competitive modes. While being like Billy Idol and “dancing with yourself” is fun and all, it simply doesn’t compare to grooving alongside somebody else. Whether it’s combining score efforts or competing in a dance off, the drop in/drop out functionality means this is definitely a party game to have.

There’s a decent set of modes and options to customize your dance session. Along with simple quick play and dance-off modes, gamers can earn new avatars and costumes in a street crew campaign mode. A nifty Fitness mode tracks calories loss with preset set lists to give players the burn they crave. Custom set lists can also be created in almost any mode as well. Need practice? The Break It Down mode let’s you practice each individual move per song at your desired pace.

Out of the box, Dance Central 2 may not seem like much with 44 pack-in songs when compared to other music titles like Rock Band 3’s 80-plus tracks. However, this is indeed a healthy set of content. Every song has a unique set of moves with three difficultly levels to master. With a heap of available DLC and the ability to import the original Dance Central’s set list for a small fee, Dance Central 2 can rock your world with over 100 dance tracks.

The only thing holding someone back in their conquest of footwork is themselves; to enjoy this is to cut loose inhibitions and feel the groove. Guys, prepare to glide your hands down your own sides all sexy-like as your Kinect snaps photographic evidence that you can share with the world. Ashamed yet? Because this is just the beginning of your night of predominately lady moves.

Even a disheveled metal-head like me can’t resist the fierceness that is Dance Central 2. It’s damn fun, easy to jump into and is a great representation of what the Kinect can do. Two-player co-op competitive support, a hefty amount of modes and readily available DLC? This is hype, baby, hype!

By Jess Castro
This entry was posted on Thursday, November 17th, 2011 at 12:16 pm and is filed under Jess Castro, Video Game Reviews. You can follow any responses to this entry through the RSS 2.0 feed. You can leave a response, or trackback from your own site.