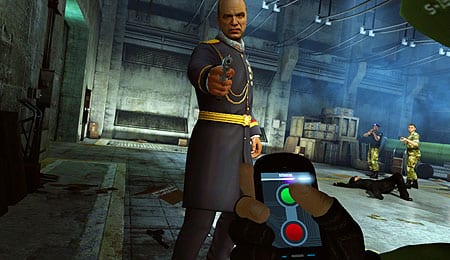 As a high-def version of a Wii game that was a remake of a Nintendo 64 title, Activision’s GoldenEye 007: Reloaded is somewhat akin to Robert Downey, Jr.’s character in Tropic Thunder — it’s the dude playin’ the dude, disguised as another dude. Almost a year ago to the day I gave the Wii version a 4.25/5, but does it grade out as well on the shooter-rich Xbox 360 and PlayStation 3 systems?

Freed from the constraints of the Wii’s controllers, Reloaded handles much more smoothly this time around. There’s still a snap-to/auto-aim feature, but unlike with the Wii it’s not needed to accurately shoot down your enemies.  That being said, some elements still feel a bit outdated — you cannot go prone or jump (you can climb and mantle objects), there’s no simulated movement or heartbeat when sniping and you scan painfully slowly with your smart phone.

Despite being rebuilt on a new graphics engine (as opposed to an HD port), the Wii roots are easy to spot in GoldenEye 007: Reloaded. There’s a general blandness that stands in stark contrast to the recent roll call of new shooters like Modern Warfare, Battlefield and Gears of War. It’s not ugly, and is a clear upgrade of what showed on the Wii, but visuals are not among the game’s selling points.

Daniel Craig and Judy Dench lend their voices, and both do a nice job amid strong overall work for all involved. There are also plenty of swanky Bond-esque tunes and solid sound effects.

The single-player campaign has remained unchanged from its Wii predecessor so for an in-depth breakdown of the story (goodbye, Pierce Brosnan) and gameplay (hello, QTEs) changes, campaign length, the addition of regenerating health on lower difficulty settings and the pros and cons of the enemy A.I. please check out my original review.

As for new business, Reloaded comes packed with a series of contained single-player missions not found on the Wii. Designated “Mi6 Ops Missions,” this mode offers up a collection of 11 standalone levels spread across four different categories. There’s elimination, where you must find and kill all the enemies in a specific location, stealth (same thing except if you’re detected you fail), defense (hold off waves of foes while info downloads) and assault (attack!).

Anyone that has played Spec Ops in MW2 or MW3 should have a pretty good idea what to expect, though the occasionally sketchy A.I. that is concealed quite well during the campaign rears its ugly head here along with some category-specific woes. Elimination keeps sending waves of troops that are all too content to make themselves easy targets, but the areas are quite large and since the star rating is based on speed I found that I was constantly sprinting around trying to find enemies to shoot.

Stealth is more fun in that troop layout is consistent. However, being detected even once ends the mission in failure, which is potentially very frustrating with 50 enemies to kill silently. Defense is as simple as point and shoot with foes firing on the computer the majority of the time and allowing you to pick them off with relative ease. Assault is intense, but it takes 25 combined stars over the first 10 levels to unlock it. That may be a tall order as securing more than a two-star rating is no picnic.

As with the original, though, most of the game’s long-term value lies with its multiplayer, which has been beefed up with double the number of players (16) as the Wii version. There are 14 maps included along with over a dozen play types, not to mention loads of variables you can tweak in private matches to create the exact experience you want. This is a fairly deep offering.

It’s easy to see the Call of Duty influence on Reloaded with the leveling system, which is used to unlock new guns and modes, custom loadouts and more. There are also challenges to be completed for XP bonuses and accolades for bragging rights. Once again, there’s plenty of content to keep you busy.

Unfortunately, online performance is not consistently on par with what gamers have come to expect out of a 16-player shooter on the Xbox 360 or PlayStation 3. Perceptible lag pops up far too often, and at times it borders on debilitating. Plus, host migration is still missing so one rage-quitting host is all it takes to end a game. This game will never enjoy the online popularity of its fellow Activision title, but with better and more consistent online play it could host a dedicated community.

Superior graphics, better controls and more content make GoldenEye 007: Reloaded a definite upgrade over last year’s Wii release. However, the switch means stiffer competition with more alternatives. It’s a good game, but it might be destined for a niche market.