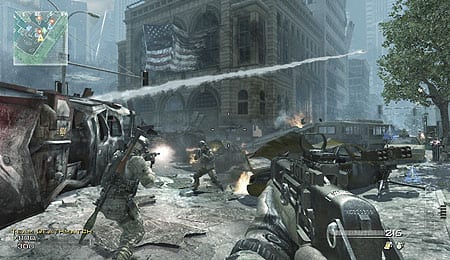 And you thought the current Wall Street protests were bad…

Put bluntly, Activision’s Call of Duty series is gaming’s 800-pound gorilla. As such, it’s a franchise that creates strong emotions among many games — some love to hate it (check out the game’s user score on Metacritic), while others just plain love it. The series’ latest installment, Modern Warfare 3, is everything you’ve come to expect from a Call of Duty game. And while that level of familiarity may be at the very root of many complaints, it certainly doesn’t preclude MW3 from being one hell of a good time.

Modern Warfare 3 controls identically to previous CoD titles, which is a good thing. Everything from movement and aiming to melee combat is crisp and responsive. Eventually the series may opt to mix things up a bit by implementing motion control or voice commands, but they haven’t here and that’s fine with me.

Running off the same graphics engine as MW2, the visuals seen here are no longer cutting edge. Sure, it’s a bit more polished and refined this time around, but there’s no substantive advancement. That’s not meant to imply the game doesn’t look good. Character models and environments are nicely constructed, and the amount of mayhem presented without a hitch in the frame rate is impressive. There are some instances when friend and foe are hard to distinguish, which can be annoying since friendly fire is often a reason for failing a mission, but it’s not a frequent issue.

After last year’s distracting inclusion of Ice Cube, I’m happy to report none of the celebrity voiceovers detract from the overall experience this time around. The dialogue is typical shooter bravado, which means that while it’s perfectly serviceable it’s also instantly forgettable. Sound effects feel like they carry more weight this time around (though it still doesn’t match Crysis 2), and the in-game music is heavy on rock and roll.

Picking up right where MW2 left off, Modern Warfare 3 continues the story arc of Captain Price, “Soap” McTavish and Makarov. As intimated in the trailers, war has broken out across the globe with Russian nationalist Makarov pulling the strings. Now it’s up to Price and his squad of disavowed Special Air Service soldiers to track down Makarov before it’s too late.

Like in previous Modern Warfare titles you’ll jump around from character to character to play out the war’s events from various perspectives. And as you’d expect, there is a ton of action around every corner with intense firefights and numerous memorable set pieces throughout. That being said, there’s an undeniable sense of déjà vu in the game’s mission structure with several of them playing out almost like a “best of” from the first two games in the series.

There also seems to be a concerted effort to create emotional moments through a more tightly focused storyline, though that never comes to fruition. Some might feel pulled in, but with the game’s characters existing exclusively as one-dimensional soldiers driven to succeed at all costs it fails to connect.

Even if Modern Warfare 3 whiffed on the heartfelt scenarios it tried to enact, the campaign packs such a sustained intensity that it’s a blast to play through. Yes, it still fits comfortably in that five- or six-hour range, but with very few moments of stealth or downtime it’s hard to imagine action fans won’t feel their bloodlust has been satisfied. Also, those that played through the first two installments receive the added bonus of getting closure on the Makarov-Price saga.

Of course, with Call of Duty, the multiplayer is the main event. On the cooperative front, MW3 brings back Spec Ops mode. This time, however, it’s been split into two offerings. The first is a group of 16 objective-based missions — each of which can be played on three difficulty settings — that is structured identically to what we saw in MW2. The other is a survival mode, which, while unlikely to achieve the same level of popularity as Black Ops’ Zombie mode, provides a good amount of fun.

As strong as the Spec Ops section is, though, it’s worth pointing out that both halves only support two-player co-op. For the mission side it makes some sense, but I really don’t understand the logic of limiting the number of players at less than four for survival. It’s a missed opportunity.

On the other hand, competitive multiplayer remains the gold standard for online console shooters. Even with the same time tested gameplay and persistent leveling at its core, Modern Warfare 3 still makes a number of subtle adjustments to its system that improve upon an already fantastic experience.

For starters, the rewards system has been further compartmentalized so that you’re constantly unlocking new things based on what weapons and equipment you’re using. Higher levels still equate to new guns, but the guns themselves can now be leveled up to unlock numerous weapon proficiencies. Killstreaks have also been tweaked as you’ll now have one of three strike packages (Support, Assault and Specialist) to choose from, each of which has some kind of tradeoff — i.e., support streaks persist even after a death, but they don’t offer much offensive firepower.

There are a total of 16 maps spread across a large number of playlists, and while most of them are staples of the series, there are some newcomers. Perhaps the most notable (and fun) addition is Kill Confirmed, which causes a player to drop a set of dog tags each time he’s killed. For the score to count someone needs to grab the tags, otherwise it’s like the kill never happened for scoring purposes. And while some will no doubt use it as a means to camp and improve K/D ratios, players that actually want to win are encouraged to team up and sweep through levels together lest valuable kills be lost.

The other big addition is the service, Call of Duty Elite. It offers a vast array of statistical analyses that obsessive players can spend hours going over, similar to what Bungie.net has done for Halo gamers. There is also a premium version available that comes packaged with the Hardened Edition or retails for US$50/year. This features a ton of extras, most notably monthly DLC that includes all future map packs. It’s a new service so only time will tell how it performs, but it’s an interesting concept that presents a lot of enticing carrots for dedicated players.

There’s a reason the Call of Duty series is the measuring stick for first-person shooters, and Modern Warfare 3 serves as another reminder of that. It’s fast-paced, addictive and loaded with enough content to keep FPS fans busy well into 2012 and possibly beyond.

By Herija Green
Tags: Activision
This entry was posted on Wednesday, November 16th, 2011 at 9:15 pm and is filed under Herija Green, Video Game Reviews. You can follow any responses to this entry through the RSS 2.0 feed. Both comments and pings are currently closed.