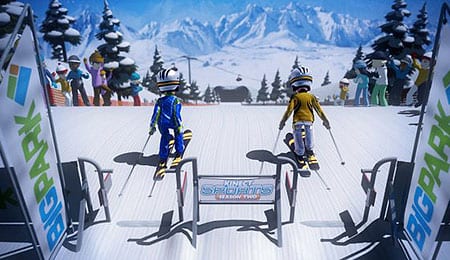 If you french fry when you’re supposed to pizza, you’re gonna have a bad time.

Last year, Rare provided one the Kinect’s better launch titles with Kinect Sports. Now it’s back with a second helping that features a more popular assortment of sports (at least by American standards) in Kinect Sports Season Two.

It’s tough to assign a blanket number to a collection of mini games that each control differently, but as a group they hold up pretty well. The sensor tracked my movements nicely, and with few exceptions it kept the action moving when people shuffled in and out during multiplayer sessions. I did find navigating some of the menus to be overly finicky, though, particularly when skipping tutorials and celebrations. Voice commands are also available and work as designed.

If you enjoy seeing your avatar dressed in sport-appropriate gear amid colourful settings, you should find Rare’s latest offering to your liking. There’s nothing special about the visuals, but they serve to keep the mood light, and it’s always fun to bounce around like a fool and have your avatar follow suit.

Cookie cutter background music and minimalist announcing make up most of the audio in Kinect Sports Season Two, which is disappointing when the game tosses out little snippets of upbeat party-type songs during post-game celebrations. Why isn’t “Jump Around” or “Hey Ya” pumping while I’m actually playing? It would’ve been more fun than what is there.

There are six sports represented: football, golf, tennis, darts, baseball and skiing. Each sport has three difficulty levels to tackle, and all of them except football have a skill challenge — these are alternate spins on the main sports (such as popping balloons with the darts). Let’s break ’em down individually.

Football: Enjoyable but flawed would be the best way to describe Kinect Sports’ take on pigskin. For starters, you’re quite limited in that you only play offense, can’t call running plays and have no ability to stiff arm or juke defenders. Instead you basically wait for a receiver to come open (indicated by their target marker turning green) and fling your arm in that direction. Once you’ve got the ball you can run in place to gain more yards, but it seems like no matter how far in the open you are the computer will eventually run you down. More could’ve been done.

Golf: If you ever played Wii Sports, this will be instantly recognizable. You’ve got your 1-, 3- and 9-hole options, and the game pretty much holds your hand throughout with a marker that lets you know if you’re aiming correctly. It’s responsive and fun. It’s also very familiar, though.

Tennis: As with the golf, you’ve seen this “controller free” approach to the sport before. However, unlike golf, I was actually pretty disappointed with the responsive of the Kinect here. Timing the slice motion felt off and resulted in a lot of missed balls. It also seemed to struggle reading the intended location and pace of returns. All of which made tennis pretty dull.

Darts: Patience is required for darts as you’ve got to slowly align the targeting reticule on the screen and then do a subtle throwing motion without making the reticule start moving again. Sometimes it works well, other times it struggles. It would’ve been nice to have a few scoring options, but here you’re left to bring down your score from 501 to zero. I also found the time-based challenge mode to be incredibly frustrating based on the inconsistency of the sensor. As such, darts is very hit or miss (literally!).

Baseball: All three phases of the game (hitting, pitching and fielding) are represented here. Batting is standard fare — take your stance, time the pitch and swing — though for certain balls in play the game will switch to a baserunning section where you run in place to reach the base. Pitching allows you to throw either right- or left-handed and toss a fastball, curveball or change based on arm speed and the angle at which you bring your arm across. Fielding simply requires you to position your glove properly. It makes for solid fun that keeps you involved throughout.

Skiing: Easy to learn and fun to play, skiing is my favourite of the group. Shifting your body left or right maneuvers your skier through the flagpoles while crouching down increases your speed. There are also sections where you can jump off ramps. With only three courses there isn’t a ton of variety from one race to the next, but what’s there makes for good times.

Beyond single and multiplayer offline games, Kinect Sports Season Two also supports matches through Xbox Live and a challenge mode. With challenge mode you can issue or accept challenges from others on your friends’ list for one of the six sports. For instance, you might pop 20 balloons in a game of darts and then dare a buddy to outdo you. It’s a cool addition if you’ve got real-life friends or family members for some good-natured bragging rights.

Unquestionably, Kinect Sports Season Two is aimed at family-centric gamers. I was lucky enough to have my in-laws in town to experience one of the game’s best features — the ability for anyone to step in, play and enjoy themselves immediately — first hand. If you’re looking for some basic fun that everyone can get in on, this is a solid addition for your Kinect library.

By Herija Green
Tags: Video Game Review
This entry was posted on Monday, October 31st, 2011 at 12:10 pm and is filed under BASEBALL, FOOTBALL, Herija Green, Video Game Reviews. You can follow any responses to this entry through the RSS 2.0 feed. Both comments and pings are currently closed.