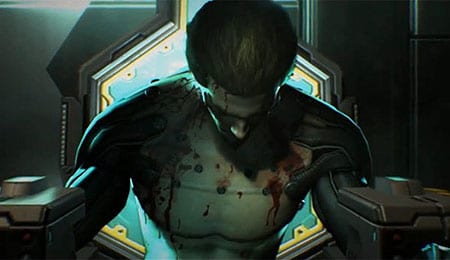 Things look bleak for Jensen at the start of The Missing Link.

There are still a couple of months remaining in 2011, but without question one of my current contenders for Game of the Year is Square Enix’s Deus Ex: Human Revolution. Its patient and oft-times cerebral approach to first-person shooters was a welcome change to the genre’s usual run-and-gun mentality.

Expanding on not only that style of gameplay but the game’s strong narrative as well is the brand new add-on, The Missing Link. Cleverly set in the midst of the main storyline, the DLC opens with Adam Jensen being interrogated by a pair of Belltower commanders — Pieter Burke and Netanya Keitner — aboard a vessel that Jensen had stowed away on. Stripped of your possessions and confined to an EMP chair that has deactivated your precious enhancements, things look bleak.

Moments later, however, the chair is mysteriously disabled and you make your escape. You’ll eventually recoup a portion of your gear and a handful of Praxis kits, though for the majority of this adventure you’ll be underpowered (at least compared to where you were at in the main game when this section plays out). The fallout from this is that gameplay feels skewed toward a stealthier hit-and-run approach. It was right up my alley because that’s how I played Human Revolution, but some may find that deliberate pace foreign.

When it comes to story, The Missing Link does an excellent job of presenting information that — while not vital to the primary plot — feels completely organic and fits seamlessly into the world of Deus Ex. It’s a contained arc that continuously drives you forward as you unravel the mystery surrounding not just Belltower’s role in everything but also who is helping you escape.

As with Human Revolution there are secondary missions in addition to your primary tasks, though the ones here are pretty straightforward and are more about obtaining extra tech or weaponry for your mission than furthering the story.

While this DLC is mostly enjoyable, there are some shortcomings worth mentioning. For starters, limited ammo and Praxis kits mean more deaths, and by extension more time spent staring at the loading screen. Backtracking is also far more prevalent here than in the main game, which may be a turnoff for some. Lastly, it’s clear some graphical shortcuts were taken as animations loop during extended conversation scenes and lip synching doesn’t match. Even taken collectively, though, these complaints are pretty minor.

For 1,200 MS Points (US$15), The Missing Link offers up around five hours of new content that succeeds in so many ways that DLC often doesn’t — with quality, continuity and a first-rate story. It’s one of the best add-ons this year and is easily worth the price.

By Herija Green
This entry was posted on Tuesday, October 25th, 2011 at 12:07 pm and is filed under Herija Green, Video Game Reviews. You can follow any responses to this entry through the RSS 2.0 feed. You can skip to the end and leave a response. Pinging is currently not allowed.