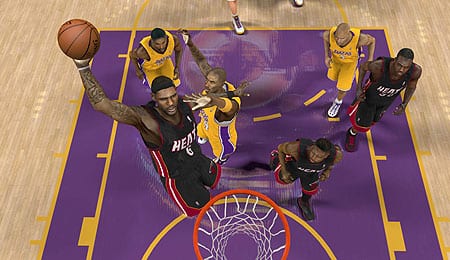 LBJ drives hard to the hoop… must be from some time in the first half.

Hoops fans haven’t had much to smile about since the Mavericks and Heat wrapped up the NBA Finals over four months ago. The ongoing labour strife between the players and owners has already resulted in the cancellation of regular-season games for the first time this century, and with no end in sight, the possibility of a lost season is very real. Basketball fans can finally at least rejoice temporarily, however, as NBA 2k12 has hit store shelves. Here’s our take on it, and be sure to read all the way through, as we’re giving away a couple of free copies at the end of this review.

In the hands of a skilled player, NBA 2k12 allows for some incredibly fluid moves. The addition of Total Shot Stick Control is just another item for the toolbox — it lets you adjust shots in mid-air by flicking the right stick — along with improved post play. There’s a price to be paid for so much control, though, as the learning curve rates among the steepest in gaming. A newly added Training Camp mode helps teach you the moves, but there’s so much to learn with button combinations and timing that even multiple trips through the lengthy tutorial are unlikely to make things second nature.

While that level of depth and complexity can be considered both a pro and a con, the passing remains a sporadic source of frustration. Icon passing is still the most effective method, but there seems to be a slight delay between input and execution, which leads to passing lanes closing down and turnovers being committed. Shooting is still tremendous while defense is generally strong.

After fawning over previous versions of NBA 2k I think I’ve pretty much run out of superlatives to discuss the visual excellence found in NBA 2k12. No other sports game on the market nails the look and feel of a television broadcast like this. Fantastic intros, stat overlays, promotions for upcoming telecasts and more create a near lifelike presentation. Character models are practically flawless with all of the NBA’s top players instantly recognizable just by the way they move and shoot. About the only complaint I could muster is that the halftime show doesn’t match the pre- and post-game.

Kevin Harlan and Clark Kellogg retain the mantle of best video game commentary by a country mile, and the addition of Steve Kerr helps widen the gap. Listening to the three of them interact as a group while referencing relevant info just about ruins other sports games in that department. Sure, you’ll still hear them repeat stories, but overall it’s pretty amazing. On top of the commentary, the sound effects are spot on and there’s an excellent soundtrack.

A common complaint among sports games is that from year to year they’re essentially glorified roster updates with minor tweaks to one aspect or another. 2kSports refuses to allow the NBA 2k series to fall into that trap. Even with the ever present shortened development cycle, NBA 2k12 is noticeably tighter than its predecessor when it comes to simulating basketball at the profession level.

I’ve already mentioned the (much) improved post game as well as the options at your disposal via the new Total Shot Stick Control, but that just scratches the surface. A revamped play-calling system really opens up your ability to run an NBA-style offense not entirely predicated on penetration. Each player has a series of sets you can run for them, and it’s easily accessed with just a couple of inputs.

Opponent and teammate A.I. have also been beefed up with more off-ball movement and intelligent decision making. The computer will attempt to attack your weak spots — cheat off for a soft double team and get lit up from three-point land, run too hard at a shooter and he’ll blow right past you for an easy deuce. It’s exceedingly well done and the best player behaviour in the series to date.

Beyond the core gameplay, NBA 2k12 stands to be judged on its three primary modes: My Player, Association and The Greatest. Let’s begin with Association, the series’ highly-regarded franchise mode. Those looking for significant enhancements will be disappointed. It’s essentially the same as last year with a handful of changes (such as restricted and unrestricted free agency) and really substandard trading A.I., which I’ll expand on later.

It’s also worth noting that if you were looking forward to attacking the rim as Kylie Irving or launching 27-foot bombs with 18 seconds left on the shot clock like Jimmer Fredette, you’re out of luck. With the lockout in effect no one from the class of 2011 has signed a contract, and thus they’re not eligible for inclusion in the game. There’s nothing 2k can do about it, but updated rosters are part of the fun of a new game, and that’s missing here.

Next up is where I like to spend the most time: My Player. Unlike Association, this mode has received a substantial update. Now upon starting your career, you’re immediately thrust into a rookie showcase game, followed by some pre-draft interviews. Based on your performance in those you’ll walk across the stage to shake David Stern’s hand as you join your new club.

The D-League is gone, meaning now you’ll simply have to battle for minutes. Play at a high level for a sustained amount of time and you’ll work your way into the starting lineup. Struggle and you may find yourself logging fewer than 10 minutes per game.

You still earn skill points by meeting in-game goals, successfully completing drills and reaching season/career milestones, but this time you’ll also be earning a salary. As a rookie, you’re a victim of the slotting system and cannot negotiate. Once your rookie contract expires, however, you are free to shop your services on the open market — that money can then be used to do things like purchase new moves to expand your repertoire or donate to charity to increase your popularity. It opens more avenues for customization and is a solid addition.

Success or failure in My Player is still largely predicated on NBA 2k12’s in-game grading system, which unfortunately remains a work in progress. Some of the more maddening elements have been cleaned up (no more getting docked for a shot at the buzzer), but far too many things remain subjective such as a “bad call for a pass” or “bad steal attempt.” Getting scored on is also far too damaging. I’m a rookie point guard playing out of position and guarding Kobe Bryant, who has three inches, 25 pounds and 30-plus ratings points on me. He’s gonna score.

Going one step further, the game still seems confused when it comes to switching and rotating defensively, which leads to scenarios where the defensive arrow appears to be pointing in all directions. It’s during these confusing scrambles that I often allow points to a player I wasn’t guarding three seconds earlier.

All of these ways to lose points ultimately makes it very difficult to play anything better than a B or B-plus game, which can be very frustrating when one of your goals is a specific letter grade. One final gripe about the goal system is the “win bonus.” If your team wins, you get 100 skill points. If they lose, however, you’re docked 100 points. Why? Early in your career you’re fighting for playing time and having precious little affect on the outcome. It seems unfair to impede your development by taking those points when the team lost by 20 and you logged all of eight minutes in the game.

There can also be a disconnect between on-court events and the post-game interview. After each game you’ll be asked a question by a reporter with four possible answers. That’s all fine, but there are times when the questions don’t make sense. As a member of the Knicks, I scored 16 points in 18 minutes off the bench at the Staples Center, including the game-clinching bucket with less than 10 seconds to play… and they asked how I felt about playing poorly in a win. Huh?

Bigger than any of the in-game issues, however, are the aforementioned A.I. trading woes. As bad as it can be in Association, the problem is magnified in My Player because the CPU is making decisions that affect your team. Fewer than 20 games into my Knicks career the team had turned Carmelo Anthony and Chauncey Billups into Rudy Gay, Mike Conley, Jr., Luol Deng and Taj Gibson. Ignoring the insanity of dealing Melo out of NYC, that’s an absurd amount of trade activity. You have to expect a certain amount of turnover throughout your career, but when the entire NBA deck has been reshuffled before the calendar hits 2012 it’s ridiculous.

Even with its fair share of issues, My Player is still a lot of fun and rates among the more addictive career-oriented experiences in a video game. Improving your player is a time consuming yet rewarding process, and the endorsements you earn as you progress are fun. And if 2kSports can release a patch to correct some of the trade A.I. and grading issues it’s got my full endorsement.

Rounding out the package is The Greatest, which builds on last year’s inclusion of Michael Jordan to bring it over a dozen of the best players in NBA history along with their teams. The entire experience is handled beautifully from the presentation (great commentary that provides a lot of insight alongside awesome graphical filters and overlays) to play styles. Given the uncertainty of the NBA’s future for this season, it was a pretty inspired move by 2kSports to look to the past to create a signature mode. If you have any passion for basketball history at all you will love this.

As much as I hate to end a review of a great game on a sour note, I would remiss if I didn’t take the 2k servers to task. They’ve often been down when looking for a game, and when I’ve found them it feels choppier than last year. Online associations are also new for NBA 2k12. They have potential, but their value plays out over time so I can’t pass judgment about them two weeks after release.

If you like basketball you should pick up a copy of NBA 2k12. It makes noticeable strides in key areas of gameplay and adds The Greatest to an already strong lineup of modes. If 2kSports can iron out the kinks (read: servers, grading and trade A.I.) via a patch go ahead and bump the score up to a 4.75.

So you’ve read the reviews and want nothing more than to snag a copy of NBA 2k12. Except now it’s getting to be the holidays and you’re a little short on cash. Fear not. Thanks to the good people at 2k, we have a pair of copies (one Xbox 360, one PS3) to give away!

You can earn up to three entries:

Entry 1. Post a comment right here telling us your favourite NBA club. Please include your console preference (Xbox 360 or PS3) and @Twitter name if you have one. If not, simply make sure your email address is current.

Entry 3. Sign up for our daily e-blast that delivers RotoRob content to your in-box for easy access. Let us know in your comment below that you’ve signed up to earn credit for this entry

Winner will be chosen at random on Monday, October 24. All entries must be submitted by 8 p.m. EST/5 p.m. PST on Monday. Please note that although anyone can enter you must be following me on Twitter or submit a working email address to win.

By Herija Green
This entry was posted on Wednesday, October 19th, 2011 at 4:24 pm and is filed under BASKETBALL, Contests, Herija Green, Video Game Reviews. You can follow any responses to this entry through the RSS 2.0 feed. Responses are currently closed, but you can trackback from your own site.