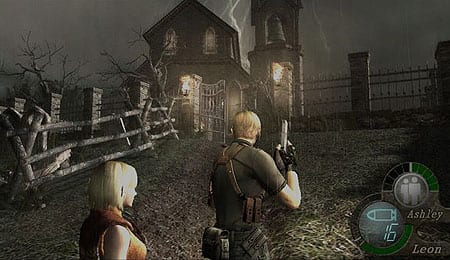 Hmmm… nothing creepy or unsettling about that house at all.

I’m an unabashed mark for Capcom’s Resident Evil series. The original was a revelation — I enjoyed it so much I even bought the Director’s Cut — and the sequel improved the formula in every way. However, the series began to stagnate with the release of Resident Evil 3: Nemesis, which began a six-year run of unremarkable titles (with the exception of the GameCube remake of the original and, to a lesser extent, Code Veronica).

All of that came to a screeching halt in 2005 when Resident Evil 4 arrived and turned the RE formula on its ear by removing zombies and significantly changing the core gameplay. Now, some six years and numerous re-releases later, the critically acclaimed survival-horror game has arrived on the PlayStation Network and Xbox Live with beefed up visuals. So does it stand the test of time?

While nowhere near as archaic as the series’ earlier entries, Resident Evil 4 HD still feels outdated when it comes to navigating the terrain. That’s due in large part to the right analog stick, which controls the camera to allow you to look around, but doesn’t change the direction you’re headed. Instead all movement is done via the left analog stick, and as soon as you release the right stick your viewpoint snaps back. Since that’s at odds with pretty much every modern game it does take some getting used to.

You’ll also need to use the shoulder buttons to prepare your attacks (left draws your blade, right takes aim with your firearm) and a face button to unleash them. It’s on the clunky side, but it’s not enough to detract from your enjoyment of the game.

Ironically, the thing being most touted about this version (the upgraded graphics) is arguably the weakest element of the entire package. When it first hit stores, Resident Evil 4 looked amazing, but of course few things age faster than technology. To be clear, these aren’t redone high-definition graphics — they’re an upscaled version of the GameCube’s visuals. Considering this is coming from a company that has done a masterful job revisiting games like Street Fighter and Bionic Commando in the past it rates as a disappointing effort.

It’s the environments that take the biggest hit as the upscaling leaves them looking very fuzzy and poorly detailed. Character models still look solid, though, and you’ll quickly find that even without the full HD treatment the phenomenal art direction allows the game to retain its creepy ambiance and feel. And ultimately, that’s the important part.

Equally vital (if not more so) to the overall vibe is the audio, and that part of the presentation remains top notch even after six years. Creepy music and sound effects permeate the game, and everything down to the yells of the villagers retains an underlying bloodlust — these things want to kill you. Even the voice acting isn’t half bad.

If you’ve never played Resident Evil 4 before, it follows Leon Kennedy as he searches a village in Europe for the President’s missing daughter, Ashley Graham. The game also makes substantial changes to the Resident Evil blueprint, switching from static camera angles to an over-the-shoulder third-person view and replacing slow-moving zombies with an impressive array of enemies.

Many of the core concepts remained intact, though, as the game still boils down to a cat-and-mouse affair where you’ll run away from enemies until you can gain an advantageous position on them and turn the tables. It truly makes for some intense gameplay given your finite amount of resources and ammunition versus a group of relentless enemies that never allow you to feel safe.

Perhaps the game’s greatest accomplishment is that despite focusing a 20-plus-hour storyline on such a simple mechanic (retreat, kill, regroup) it never gets stale. Resident Evil 4 HD is expertly paced with epic boss battles highlighting an awesome ride that keeps introducing new enemies and varying things up enough to keep you enthusiastically pushing forward. It’s just brilliant.

Beyond the main game, you’ll also get a trio of fairly deep secondary modes: The Mercenaries, Assignment Ada and Separate Ways. Of that group, Separate Ways is the one to know — it’s a decent length side story featuring Ada Wong that’s woven into the main plot of RE4. There’s nothing exclusive to this collection, which is unfortunate, but there’s still a lot of content.

Resident Evil 4 was a quantum leap in the series’ evolution, and it’s a game many still consider to be among the greatest action titles ever made. The price point may dissuade those who have already played through the game more than once, but if you’ve never experienced it or sold your copy and want to do it all over again then Resident Evil 4 HD is a great buy.

By Herija Green
This entry was posted on Saturday, October 8th, 2011 at 9:36 am and is filed under Herija Green, Video Game Reviews. You can follow any responses to this entry through the RSS 2.0 feed. You can skip to the end and leave a response. Pinging is currently not allowed.