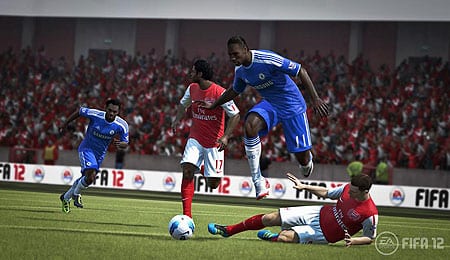 Watch out mate, you should probably keep your eye on the ball.

You probably already know whether you’re getting FIFA ’12 or not, or you may even already have and love it. Each annual installment proves that the franchise is for die-hard soccer fans, but is this year’s version a vital addition to your collection or should you skip it until next year?

Historically, FIFA hasn’t experienced many radical changes to its control scheme over the years, and FIFA ’12 is no exception. Older users will be able to use most of the tricks they have learned from previous games and newcomers should be able to dive in with no problems.

The most significant alteration to the control scheme is “tactical defending” — it’s optional in single player, but mandatory online. Tactical defending forces more manual control over defenders, and while implementation is simple enough (the game starts off with a tutorial explaining how it works), it’ll certainly change the play style of seasoned veterans. It also shifts the balance to being more attack-heavy than ever before (more on this later).

Other than this, it’s “same old, same old” in the FIFA control scheme, and as such is near perfect at what it sets out to do.

As you’d expect, this is the best looking soccer game on the market. The fluidity in the players’ movements is much improved over past versions, as is the interactivity between them — possibly due in part to the new Impact Engine. The Impact Engine allows for more realistic physical collisions on the pitch, resulting in more unique and naturalistic moments, and it is certainly the biggest graphical improvement.

FIFA strives to provide the ultimate soccer experience, and for the most part, provides a suitable atmosphere. The stadiums are big and bold, with a couple thousand fans cheering you on, and a killer licensed soundtrack. When I played well, I felt pride, and when I let a goal slip through my defense, I felt as though I’d let the fans down, and that level of immersion is vital to the experience.

Player likenesses are as convincing as ever, which is to say all the most famous players are recognizable, even if they look a bit like Muppets at times. This is not a huge issue for a majority of the game (you see them from 100 feet in the air after all), but it does cause some uncanny valley moments after scoring a goal.

Another byproduct of technology not catching up with our expectations is the crowds at large games, who still look like rows of blurry animated cardboard cut-outs. Perhaps this is the limit of what can be achieved this generation, but given that most of the experience is so immersive, it is disappointing to see the unrealistic crowd in a moment of glory, as they take you out of the moment and you remember, yes, it’s just a video game. A game simulating a game, even.

Similarly, the commentary provided for games has not advanced much in the last few years. While the delivery is professional, it often sounds forced and scripted, especially when a line is repeated multiple times per game. Perhaps it is wishful thinking to expect any more than this, but it’s another distracting element, all the same.

I’m going to assume some prior knowledge here, but if you’ve never played a FIFA game before, here are the basics: it’s a soccer game. In recent years FIFA has risen to be the soccer game of choice for many because of its easy-to-learn, difficult-to-master gameplay — it’s almost shocking the amount of potential gameplay variety on offer here. As a result, when experienced players are involved FIFA always feels balanced and fair, vital in a primarily competitive game.

As mentioned earlier, the biggest change to gameplay is the tactical defending. The idea is to encourage players to make tactical decisions regarding formation and player placement, containing attackers and forcing them to make mistakes. Many players have already complained about this style of defending as it makes anticipating and defending challenges much harder, but I believe this feature will prove itself over time. Rather than just setting a defender to hunt down the attacker, strategy is a must, resulting in an almost chess-like battle between teams on the field.

The other big change to gameplay is the addition of “precision dribbling,” which allows players to defend their ball possession while moving and utilizing tight control. While this sounds like a major overhaul to the system, in practice it didn’t really add or detract much for me personally. In fact, I often forgot about this feature while playing, and it seems largely insignificant in comparison to the tactical defending.

Other than that, it’s business as usual with FIFA, which will keep many fans happy. Ultimate Team has been folded into the main game, allowing you to create a custom team to bring to the top, but it is unlikely to distract players from the main modes too much. Career mode offers a very comprehensive look at being a manager, but my input seemed a little inconsequential. I often felt like my team would have gotten on fine without me for the most part.

However, the main focus of FIFA has always been the core game experience on the field, and it looks unlikely to have any serious challengers any time soon.

If you are debating whether you should upgrade to FIFA ’12 or not, our take is you probably should. This feels like it will be remembered as one of the more important additions to the FIFA franchise in future years, and while the improvements made are not revolutionary, they certainly help solidify the overall experience. For soccer die-hards this is a no-brainer, while for casual fans it’s a hearty recommendation.

By David Cooper
This entry was posted on Friday, October 7th, 2011 at 11:02 am and is filed under David Cooper, Video Game Reviews. You can follow any responses to this entry through the RSS 2.0 feed. You can leave a response, or trackback from your own site.