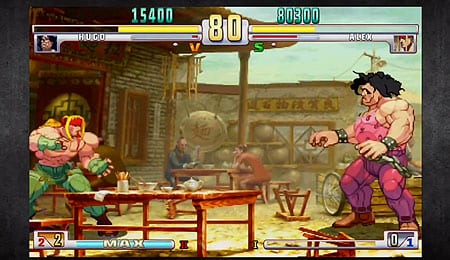 If I had a friend come up to me say, “Hey, guess what Capcom is releasing next?”, I’d go out on a limb and say it’s something Street Fighter related — and there’s nothing wrong with that. It’s a series that’s embedded into general gaming culture as much as Mario and Sonic. Releasing Super Street Fighter IV Arcade Edition recently wasn’t enough to keep diehard fans satisfied, so Capcom rolled out Street Fighter III: 3rd Strike Online Edition for Xbox Live Arcade and PlayStation Network. Let’s press on and see if this re-release has what it takes to keep this classic as fresh as it was 12 years ago.

Out of all the incarnations of Street Fighter, many players agree that the SFIII games are the most technical and concise of the series, with 3rd Strike being the definitive version. This conversion keeps it real, playing just as tight as ever. New generation fighting fans that may have missed out on this one shouldn’t feel too out of place. It’s still essentially Street Fighter: move your fighter with d-pad or analog, and bring the pain by chaining together a series of moves with three punch and three kick buttons.

As with previous releases, 3rd Strike has pitch-perfect responsive controls that demand practice, patience and precision. Performing special moves such as parries and leap attacks is simple, but implementing them into the flow of your fight successfully takes dedication. Long-time players will feel right at home and newcomers are in for a treat, however they have to invest some time into mastering the tactics.

For a true arcade feel, an arcade stick is a must, but playing with a controller isn’t too shabby. The common gripe with arcade fighters on pads still stands — the d-pad is a little stiff, the analog is a bit loose and you’re missing out on the original six-button layout. Of course, the buttons can be mapped and customized to suit your needs, but you just can’t beat a good ol’ (most likely expensive) arcade stick.

Twelve years have passed since the original Street Fighter III: 3rd Strike was released and still, this is a great looking game. The beautiful and crisp pixel-animated characters are a marvel to look at. It’s not the extreme overhaul redraw that Super Street Fighter II Turbo HD Remix had, but that’s fine considering how extremely difficult and expensive that probably would have been to do. Perhaps the only thing dated is how uneventful the backgrounds are as they lack animation when compared to the fighters. The smooth bass-heavy hip-hop tunes are all there, as well as the excellent sound design and voice samples. Also available are remixed versions of the tracks, which are very well done.

Similar to the visual options in Capcom’s re-release Final Fight: Double Impact, gamers have the choice to view sprites in their raw original form or add filters enhanced for HD sets. The smoothing filter is very clean as is the widescreen stretch. For some added nostalgia, you can also add a concave arcade monitor look, complete with scan lines. Plus, playing in 4:3 mode will allow live updating goals to be shown on the sides of the screen to keep track of your achievement progress. Whatever your preference is, this new edition has you covered.

If you’ve never played a Street Fighter game in your life, much less 3rd Strike, now’s as good time as any to try it out. To get newcomers into the swing of things, or for those looking for a refresher course, a wide selection of challenges is available in Trials Mode. General trials will show you the basics, such as parrying and beginner combos for all characters while earning “Vault Points” to purchase artwork and unlockable options. You’ll also perpetually earn Vault Points from playing all modes in the game by accomplishing tasks ranging from the simplistic to the advanced. But fair warning: the advanced trials are pretty damn hard for the average player. (Good luck on trying to relive the famous EVO moment of parrying Chun Li’s super!)

With Street Fighter being a diehard favourite that is still played competitively to this day, Capcom doesn’t disappoint with its online options. Tournament Mode and Ranking Mode are available as well as non-ranked matches to get your feet wet. The amount of options and dip switches at your disposal are staggering (they can be earned or completely unlocked for a $1) allowing complete customization of your personal online lobby. You can even forbid selection of certain characters in your tourneys. (“Okay, nobody is using Ken tonight!”)

The actual online play is very smooth with practically no lag if there is a solid connection. One gripe is the waiting time for a Rank match; there were times when I waited a couple of minutes before a successful pairing occurred. This is something I hope will be fixed in future patches, as well as the ability to record matches and post them to YouTube.

Everything else you’d want in 3rd Strike is here: the same balanced character roster (albeit the weirdest selection of characters in a Street Fighter game, for sure), tight controls and classic visuals. Perhaps the perfect release would have all versions and elements of Street Fighter III including the original release and 2nd Strike, but maybe that’s asking too much. Aside from that, this is as close to a complete package as it gets, and it’s certainly what fans have been waiting for.

You asked, and now you shall receive as Capcom unleashes Street Fighter III: 3rd Strike Online Edition on Xbox Live Arcade and PlayStation Network. For 1,200 MS Points (US$15) you get one of the most hardcore fighting games of all time with killer online options, a vast set of trials and unlockables, and a knockout presentation. Get it!

By Jess Castro
This entry was posted on Tuesday, August 30th, 2011 at 11:39 am and is filed under Jess Castro, Video Game Reviews. You can follow any responses to this entry through the RSS 2.0 feed. You can skip to the end and leave a response. Pinging is currently not allowed.