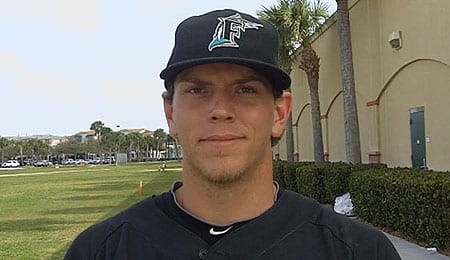 Now that’s something worth tweeting about: Logan Morrison is back.

One of my favourite dates is just around the corner. The September 1 roster expansion will mean a steady stream of players both auditioning for roles in 2012 and up to provide depth for those clubs still in the chase. Do these players have Fantasy related value? Yes, especially over the last several weeks of the season. Stay tuned for a thorough review in the next week as we attempt to find some of those hidden gems. Without further ado, let’s get back to the topic at hand, this week’s Wire Troll.

Logan Morrison, OF, Florida Marlins (CBS: 69 per cent owned, Yahoo!: 29 per cent): In a rather shocking move, the Marlins demoted Morrison two weeks ago, stating they wanted to see him “concentrate on all aspects of being a major leaguer.” The word is his penchant for constantly tweeting was getting in the way of his development and pissing off the Fish, not to mention the fact he also skipped a team event. Given Morrison’s numbers in 11 days at Triple-A (one homer, five RBI and a .167 BA), it’s clear his demotion wasn’t about getting his game in order. Apparently, “improvement” can be defined rather loosely in Florida these days. He’s still available in 70 per cent of Yahoo! leagues and the 24-year-old’s power potential is sufficient to warrant having him active in all leagues for the stretch drive.

Jordan Schafer, OF, Houston Astros (CBS: 7 per cent owned, Yahoo!: 1 per cent): On Monday, the Astros activated the former Brave and in six games since his return he has one homer and two thefts. Houston is going to give Schafer a solid audition down the stretch in centrefield as it plans for 2012. If you need a late push in both the stolen base and runs scored categories, a marginal FAAB investment in Schafer could return solid dividends.

Dayan Viciedo, OF, Chicago White Sox (CBS: 15 per cent owned, Yahoo!: 2 per cent): Don’t you find it hard to believe that Viciedo is still only 22? Carlos Quentin hit the DL last week with a left shoulder sprain and the White Sox are finally going to give the young Cuban another opportunity. In 452 at-bats at Triple-A Charlotte, Viciedo smacked 20 homers with 76 RBI and a great .296 BA. He should be looking at regular at-bats until at least the return of Quentin and be an asset in both AL-only and deeper formats.

Bruce Chen, SP, Kansas City Royals (CBS: 23 per cent owned, Yahoo!: 9 per cent): I never thought I’d be writing this, but Chen is on a roll. He’s held some very solid offenses in check in August and is coming off four consecutive wins against the Tigers, White Sox, Yankees, and Blue Jays. Kansas City has a rather weak September schedule including nine games against the Twins and Mariners which bodes well for Chen’s chances of continued success.

Brandon Allen, 1B/OF, Oakland Athletics (CBS: 16 per cent owned, Yahoo!: 4 per cent): Since being promoted in mid-August, Allen has now mashed three homers, driven in seven, scored 12 runs, and hit for an amazing .327 BA. The batting average isn’t sustainable, but the power potential is very real and with regular at-bats he makes for a very serviceable corner infielder in all formats.

Kyle Seager, 3B, Seattle Mariners (CBS: 11 per cent owned, Yahoo!: 9 per cent): Last week, Seager, 23, went 12-for-20 with one homer, two RBI, and six runs scored. Chone Figgins is at least a week away from returning from the DL and with his pathetic .188 BA the Mariners won’t be rushing him back into the everyday lineup. Seager hasn’t show any serious power potential, but his solid strike zone judgment will guarantee him adequate playing time moving forward.

Steve Cishek, RP, Florida Marlins (CBS: 1 per cent owned, Yahoo!: 1 per cent): Leo Nunez is struggling, having allowed nine earned runs in his last three appearances. The Marlins turned to Cishek on back-to-back days and he’s a perfect 2-for-2 in saves. Cishek has not officially been handed the closer role, but has proved that he can get the job done should Nunez continue to falter.

Eric Young, Jr., 2B/OF, Colorado Rockies (CBS: 18 per cent owned, Yahoo!: 5 per cent): He’s not playing regularly. He’s not hitting for average. But what Young is doing is stealing bases at a solid clip with 10 thefts in 65 at-bats in August. If moving up in the stolen base category is a difference maker in the chase for your league title, find a home for the speedster immediately.

Chris Marrero, 1B, Washington Nationals (CBS: 2 per cent owned, Yahoo!: n/a): On Saturday, the Nationals called up their first baseman of the future. In 483 at-bats at Triple-A Syracuse, Marrero hit 14 homers with 69 RBI and a great .300 BA. The 23-year-old should see steady at-bats down the stretch as the Nationals give Michael Morse more of a look in left field.

Bronson Arroyo, SP, Cincinnati Reds (CBS: 39 per cent owned, Yahoo!: 27 per cent): Arroyo isn’t going to provide help in the strikeout category, but with four quality starts in five August outings he makes for a reasonable option if you’re looking to close ground in the wins category in deeper and H2H formats.

Eric Surkamp, SP, San Francisco Giants (CBS: 5 per cent owned, Yahoo!: n/a): Recently promoted Surkamp had an outstanding season at Double-A Richmond. In 142 1/3 IP, he allowed 110 hits and 44 walks while amassing 165 strikeouts on his way to a stellar 2.02 ERA. In his major league debut Saturday against the Astros, the 24-year-old southpaw went six innings, allowing six hits, three walks and one earned run with four strikeouts in a game eventually won by the Giants in 10 innings. The health of Jonathan Sanchez will determine how much burn Surkamp gets over the balance of 2011, but he’s looking like a solid bet for at least one more start as he auditions for a starting rotation spot in 2012.

Joel Peralta, RP, Tampa Bay Rays (CBS: 4 per cent owned, Yahoo!: 2 per cent): Kyle Farnsworth is dealing with a tender elbow and wasn’t available Saturday. Peralta stepped in and picked up the save against the Jays and would be the favourite to close in Tampa Bay should Farnsworth’s elbow remain an issue.

By Tim McLeod
This entry was posted on Sunday, August 28th, 2011 at 1:35 pm and is filed under BASEBALL, The Wire Troll, Tim McLeod. You can follow any responses to this entry through the RSS 2.0 feed. You can skip to the end and leave a response. Pinging is currently not allowed.