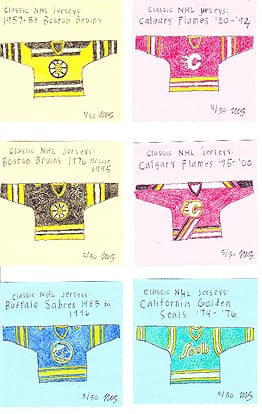 Mathieu Santos is obviously a hardcore hockey fan, judging by his artwork.

While there is no specific sports theme to Santos’ album, his love of hockey clearly shines through as the classically trained painter has included hand-drawn vintage hockey jersey drawings in the limited edition, numbered white vinyl edition of the release. Only 500 copies of the album will be released and even the jersey drawings are hand-numbered, giving hockey fans a nice little collectable to go along with the album. Further evidence in his love of hockey can be found in the fact that Santos seems to be wearing a Boston Bruins jersey in virtually every media shot. Like here. And here. And here. The dude either loves hockey or his wardrobe is extremely limited.

The six different jerseys Santos drew include: Boston Bruins 1957-58 and 1976-95; Calgary Flames 1980-92 and 1995-2000; Buffalo Sabres 1983-1996 (what? No banana slug version?); and, in true old school style, he also created a California Golden Seals 1974-76 jersey drawing. Our elderly readers will no doubt recall the Seals’ signature white skates – one of the all-time worst moments in NHL style history, right up there with the Canucks’ “V” jerseys, the Flyers’ long pants. and the Kings’ awful third jersey in which the monarch looks like he has a scary purple beard. Shudder.

Anyways, let’s talk about the album, shall we?

Remember when Roger Taylor of Queen came out with a solo disc, Fun in Space? For some reason, I am reminded of that album when I listen to Massachusetts 2010, although Santos’ debut solo effort only hints of the quirkiness that was Taylor’s debut effort. The ethereal, far-away sounding singing style also made me think of Eddie Jobson’s The Green Album or possibly even some of the work by the Roxy Music offshoot band 801, although there’s certainly no hint of prog rock to be found here.

The disc opens with the bouncy and poppy “I Can Hear the Trains Coming,” a track that’s somewhat reminiscent of “Skin Deep” era Stranglers, especially with organ driving the song. It’s definitely less edgy than the Stranglers, but there’s a similar vibe. This track is available for download from Spin Magazine here.

“Massachusetts,” assumedly the title track, follows. The second-longest song on the album, it has an atmospheric intro and ending and in between launches into a world beat that wouldn’t be wholly out of place on Paul Simon’s classic Graceland album. Unlike the first track, “Massachusetts” is more bass-driven, which isn’t surprising considering that’s Santos’ instrument of choice. There’s also a sneaky guitar solo midway through the song, interpolated with some funky horns. This part of the track has an almost ska feel to it, sort of like sped up Sandanista-era Clash.

“I’d Go” also features a somewhat atmospheric opening, albeit much briefer. It has a more neo-psychedelic feel to it and is a complete departure from any of the previous tracks. Also bass driven, this song is a quick ditty that ends rather abruptly.

Next up, “(I Just) Need to Know” kicks off with a Beach Boys-like vocal treatment, but the mostly instrumental track is otherwise quite simplistic in its arrangement. The beat is repetitive, but somewhat hypnotic.

“Good Return Theme” has another stark and atmospheric opening before launching into an instrumental, robotic-like melody that sounds a scaled down, slightly funkier Radiohead number.

Following that, “I Said So” is another bouncy, albeit extremely brief, track with more ska-like backbeat.

“Silly Thoughts,” is an interesting hybrid of hand clapping and orchestral sounds with an unknown woman singing the vocal (the media materials did not list the guest musicians, much to my chagrin). It’s an experimental track that employs several interesting items as instruments. Is that mallet in the background?

“Wait to Get Up,” is another short joint, again with a ska-type rhythm and an out-of-the-blue quick guitar solo, one of the precious few on the disc.

Massachusetts 2010 closes with “The Bay/Where to Find Her,” the album’s longest song at a hair over seven minutes. It opens with some feedback-ridden fret work that is refreshingly untextured, unlike much of the album. This gets a bit more frenetic for a couple of minutes before morphing into a staccato bass and guitar piece until the lyrics finally start. This track, for my money, is the finest on the album – especially lyrically, but man, does Santos ever love sudden endings!

All told, Massachusetts 2010 is a pretty strange trip that melds several different musical styles. Those that need to define things may consider it a dog’s breakfast; others, like myself, would more flatteringly describe it as a collage.

By RotoRob
This entry was posted on Thursday, August 4th, 2011 at 10:08 am and is filed under CD Reviews, RotoRob. You can follow any responses to this entry through the RSS 2.0 feed. You can leave a response, or trackback from your own site.