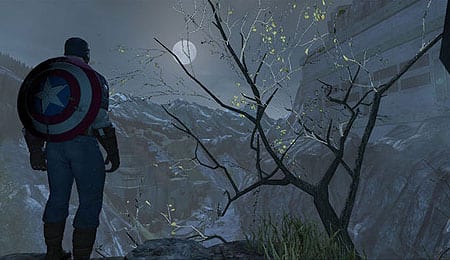 Got a little Captain in you?

As I’ve written in this space before, film-to-game adaptations have resulted in some of the worst blights on the gaming landscape in recent years. However, SEGA’s newest foray into that realm, Captain America: Super Soldier, manages to steer clear of that fate thanks to a combat system that, while not original, is pretty enjoyable.

There are only two real elements to Super Soldier: combat and pseudo-platforming. The former makes full use of the controller with face buttons handling melee attacks, grabs, counters and evasion. Triggers and bumpers primarily incorporate Cap’s shield via blocking and ranged attacks, though the right bumper serves as a modifier for more powerful attacks. Although I’d occasionally use the wrong defensive technique in hectic spots, it’s a strong setup.

For the game’s other primary activity it’s more uneven. Pressing up on the d-pad with illuminate all potential grab points, and from there scaling objects and swinging across beams is streamlined into a series of timed button presses. It creates cool looking moments, but it’s a bit clunky and uninteresting to actually execute.

Let’s start with the good. Captain America looks great, and his signature red, white and blue colours stand out against the largely muted tones of the sprawling German town that serves as the backdrop. The fluidity of his movements in combat is another high point. Watching Cap seamlessly counter a move, roll over the guy’s back and then unleash a powerful kick into the face of another enemy is a sight to behold. Making it more impressive is that you rarely see much unnatural movement, though there are occasions where you’ll tractor beam to an enemy when they’re on the ground.

On the downside, Super Soldier is lacking in terms of environmental and enemy variety — one of the reasons the Captain stands out so much. You’ll see the same handful of computers, tables, barrels and boxes throughout, which gets tedious after a while. Cut scenes are passable at best for the most part, while lip synching is rough.

As with many film-related games, the movie’s lead actor, in this case Chris Evans, lends his voice to the main character. He does a fine job as does the rest of the crew even if some of the German accents seem a little overdone. Sound effects, particular the bone-jarring super hits, are strong while the musical score is unremarkable.

Despite being released in conjunction with the upcoming First Avenger film, Captain America: Super Solider tells a unique story, mixing elements of the comic book with the movie’s likenesses. It’s a narrowly focused tale that follows Captain America through a single mission entirely contained within one location. Lots of familiar faces, like Madame Hyrda and Iron Cross, are woven in, though the brief nature of arch nemesis Red Skull’s role in the game makes it feel like a side story.

That’s not to say the plot, inked by longtime Marvel writer Chris Gage, is bad, it’s just that there are no twists and turns or stunning revelations. It’s a straightforward narrative that follows Captain America as he does lots of patriotic stuff like pounding the crap out of HYDRA soldiers and rescuing captured POWs from a life as Arnim Zola’s test subjects.

Combat in Super Soldier will be instantly familiar to anyone that’s played Arkham Asylum, as Cap is able to counter melee and ranged attacks from any direction based on timed one-button inputs. A lack of originality doesn’t prevent Captain America from being fun, though. Quite the contrary, as taking on a half-dozen guys at once and acrobatically flowing from one devastating counter into the next is a blast.

Successful strikes, counters and evasions will load up Cap’s focus meter, which is broken into four quadrants. As each one fills, you gain access to a series of violent special attacks. For example, a focused strike will cost one quadrant, while grabbing an enemy and taking control of his weapon will use up two of them. Fill the meter completely and you can spend all them at once to enter “Super Soldier” mode where enemies are defeated in one blow.

Beating your foes and doing things like decrypting Enigma machines and picking up scattered dossiers will earn you Intel Points, which can be used to upgrade your abilities. There are only nine total upgrades, though, and by the time your adventure is winding down you’ll likely have seen everything the game has to offer combat wise. Still, it’s enjoyable enough to serve as the game’s best feature for the duration of the campaign.

When not in combat, you’re free to do some exploring in an effort to track down the game’s many collectables. Everything from beer steins and angelic statues to a ceramic chicken are available to grab — however, with the exception of the film reels, the collectables are only there to extend the single-player experience by giving you a reason to step off the game’s linear path. As a completionist (and unabashed Achievement/Trophy hunter) I tracked them all down, but if that’s not of interest to you that entire portion of the game can be skipped.

As noted earlier, there is also a fair amount of climbing and jumping involved with Captain America: Super Soldier. In some ways those sections reminded me (at least visually) of Assassin’s Creed, though in truth you’re only able to access pre-determined routes and there are no consequences for failure. That robs the platforming moments of tension and makes them feel hollow.

All told the game stretches over 18 chapters, which took me a little more than seven hours to complete while doing a fair amount of exploring and backtracking searching for items. It’s not a difficult game to complete, at least on the default setting where health regenerates after each battle, so those looking for anything resembling a challenge should start on hard.

Beyond the main story, a series of challenges also become available. They’re split into combat, platforming and collection missions with each possessing a target time to earn medals. As with the campaign, the challenges are not particularly difficult and earning top marks on the 10 of them shouldn’t take you more than an hour or so.

Although gamers have been well trained to be wary of movie-based titles, Captain America: Super Soldier deserves a long look from those looking for an entertaining combat-driven romp.