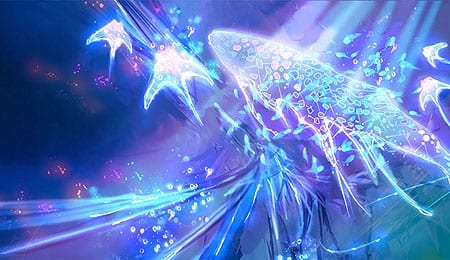 Cyber Shamu probably isn’t even among the top-10 interesting visuals in Child of Eden.

Whatever you think of Microsoft’s Kinect as a piece of technology, its library of games has pretty much fallen under one of two categories: collection of mini games and fitness/dance. Even this month’s E3 offered little hope of diversification. That’s one of the reasons that Ubisoft’s Child of Eden, the brainchild of Rez developers Q Games, deserves a long look from Kinect owners that can only dance to Lady Gaga so many times. Another reason — it’s a total trip.

While Child of Eden throws a dizzying array of lights and sounds your way, the controls are exceedingly simple. With controller in hand, you move the targeting reticule via the left analog stick and alternate between a lock-on laser (hold “A” to activate, release to fire) and what is essentially a machine gun (press “X” or right trigger). You can also deploy a screen-clearing “euphoria” blast by pressing the “B” button. Everything handles smoothly for the most part, though there were instances when it felt like I couldn’t move the reticule fast enough to track enemies.

Of course, you can also play with the Kinect. Here, both hands manipulate the reticule — when your right hand is raised it’s the lock-on laser, and when it’s the left you’re firing your tracer gun. The tracer gun works beautifully and is smoother and faster than a controller. The lock-on laser aims fine, but it doesn’t always recognize the pushing motion that fires the weapon. To launch “euphoria” you’ll throw your hands in the air (waiving them like you just don’t care is optional), which is the low point of the Kinect functionality as it causes the camera to go skyward. That can be disorienting.

I try not to overuse the word “experience” when discussing video games, but Child of Eden’s audio and video approach can’t appropriately be described any other way. It constantly bombards your senses with vibrant, colourful creatures that gracefully meander across the screen. Even at the most hectic of times, there’s still a tangible serenity to be found. That’s not to say you’ll never get frustrated, but it’s hard to get too worked up amid the kaleidoscope of colours.

And then there’s the soundtrack. Recorded entirely by game designer Tetsuya Mizuguchi’s band, the Genki Rockets, the music here establishes a pulse-pumping rhythm that’s easy to pick up. Even if the songs don’t represent your preferred style of music, it’s hard not to get sucked in when it’s blended so seamlessly with the graphics. Shooting the various enemies provides secondary audio elements that, despite occurring based on the individual, never sound out of place.

Stripped of all its flashy presentation elements, Child of Eden is essentially an on-rails shooter. There’s a quirky story in place — you’re trying to save the memories of a girl named Lumi, whose personality is being rebuilt within an artificial intelligence (called Eden), from an unknown virus that is threatening the project’s successful completion — but it’s paper thin and ultimately pretty superfluous.

You’re equipped with two weapons, a lock-on laser that can target up to eight creatures at once and a tracer gun that’s needed to shoot down enemy projectiles. Advancement through the game’s five archives (read: levels) isn’t particularly difficult, but maximizing your score can be tricky. That’s because Child of Eden also incorporates a rhythm component, and the only way to build up a score multiplier is to simultaneously paint eight targets and fire in time with the beat.

It’s not too tough to accomplish when waves of non-lethal enemies are lining up for it. However, in the heat of battle you’ll initially be too worried about surviving to make sure you’re keeping the rhythm. As you make more trips through the beautifully designed and varied levels, though, you’ll learn what’s coming next. This allows you to plan ahead and focus more on timing your barrages of laser fire. And therein lays the majority of the game’s replay incentive.

That’s because Child of Eden is an extremely short game. In fact, you can complete it in less than two hours. That means to realize its full value you’ll need to be someone that embraces things like pattern memorization and score chasing. If you’re not invested in improving your in-game performance, you’re almost certainly going to find the total package wanting. A number of unlockables, including a Hard Mode that becomes available once you complete the game, are also available.

Outside of the game’s short run time, the most notable drawback is that there are spots when the screen will get filled with so many objects that it becomes extremely difficult to spot incoming enemy fire. The game does provide a warning indicator that directs you toward enemy projectiles, but it becomes hard to utilize when things get too chaotic.

Despite its brevity, Child of Eden is an impeccably designed and beautifully presented title that somehow manages to create a fast-paced yet relaxing vibe. And perhaps more importantly, it represents the most exciting use of the Kinect peripheral to date. If you have one, you need this game.

By Herija Green
This entry was posted on Wednesday, June 29th, 2011 at 10:32 am and is filed under Herija Green, Video Game Reviews. You can follow any responses to this entry through the RSS 2.0 feed. You can skip to the end and leave a response. Pinging is currently not allowed.