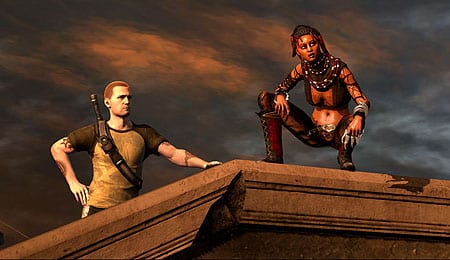 Never trust a crazy woman who can teleport and spit fire, especially if she’s got an inconsistent accent.

Developer Sucker Punch takes us back to the story of Cole McGrath and his crazy lightning powers — only this time, it’s moved him down south, amped up his powers, and tapped into some of the elements to expand his range of destruction. Is it as awesome as it sounds? Let’s find out.

(inFAMOUS? Infamous? inFamous? For simplicity’s sake, I’m just going to refer to it as Infamous despite what the marketing material says.)

The first Infamous game excelled with crisp parkour movement combined with effective combat and superpower controls. Infamous 2 carries on what works, as Cole’s movement around New Marais is fluid, fast, and effective. The game offers a bit too much assistance for jumps at times, sometimes pulling you in with a sticky feel, but for the most part this correction is a welcome addition that allows you to enjoy freedom of movement without worrying about getting everything exactly right.

Combat and power controls remain largely the same. Square executes melee combat while L1 opens the targeting reticle for powers. With the target on-screen, each button offers a different power, all upgradable through an improved leveling system. This time around, Cole doesn’t just upgrade his powers, he earns variations of each type of power. Infamous 2 offers more flexibility than its predecessor, giving you the option to switch in-use powers instead of forcing you to stay with updates. The directional pad provides further specialized powers for mass carnage, and when you obtain either fire or ice about one-third of the way through the game, things get even more chaotic.

Combat was not exactly enjoyable in the first Infamous game. Cole did pretty much the same short combo over and over, and it was only really useful when you were mobbed by enemies. One of the major corrections Sucker Punch has implemented is melee via a bad-ass lightning-rod thingy. Nicknamed the AMP, Cole now wields what looks like a giant tuning fork capable of charging up electricity. Melee combat packs much more of a punch now, and the upgradable finishing combos, combined with slo-mo looks at the finishers, make melee much more enjoyable to round out the Infamous package.

Despite its high-profile release, the first Infamous wasn’t exactly a graphical powerhouse. The environments were clean and crisp and the lightning effects were tremendous. The actual character models weren’t that detailed, though, and the open-world nature of the game meant that you saw a lot of the same street passerbys over and over.

Infamous 2 has resolved some of this, with greater detail on all character models. Cole himself looks much sharper and lifelike, as do the other main characters. This is particularly noticeable during cut-scenes — yes, the sequel has in-game cutscenes in addition to motion-comic storytelling. The open-world’s population also looks a few steps above the previous game, though they still look like filler material.

One of the biggest graphical differences in Infamous 2 is the setting of New Marais. Empire City was a gray metropolis without much flair or personality. New Marais — essentially the spirit of New Orleans imported into the Infamous universe — is louder, livelier, and more vibrant all around. The different districts pop with distinct colours and traits, the buildings bring a mix of old and new, and the southern sunsets bring a welcomed purple hue to everything. Environmental animation is also impressive, as various parts of buildings and shacks will collapse under the abuse of Cole’s battles with the militia.

Just like the first game, Cole’s powers are a significant part of the graphical experience. Sucker Punch has amped up Cole’s powers and given him the option of fire or ice depending on which path you take, and these are all bigger, louder, and more impressive than what was seen in the first game. In order to feel like a superhero, you have to see the cause-and-effect of your powers, and Infamous 2 doesn’t disappoint.

Part of the early buzz around Infamous 2 surrounded Cole’s new look — the plan was to deviate from the shaved head, scarred would-be hero into, well, a kinder, gentler guy with trendy hair. Fan outcry quickly pushed Cole’s design back, but there’s no denying his new voice actor, who brings less gravel and more life to the voice. If you were a fan of the first game, this is a little jarring at first; for players new to the game, it’s no big deal. Zeke’s voice actor returns, so there’s some continuity there, and in general, the game does a pretty good job creating believable characters. The new female agents Nix (bad) and Kuo (good) are serviceable, though Nix’s voodoo-lady accent is hit and miss at times.

The audio mix can be unbalanced at times, as the people in Infamous 2’s open world will say things based on Cole’s current karma status. However, the volume of the voices lack some consistency and sometimes overpower mission dialog. There were more than a few times when I’d be trying to follow a character on an escort mission when a random NPC said something at full volume, throwing me off.

Play story mission, collect power shards, help/hurt random citizens, repeat — that was pretty much the Infamous formula the first time around. That basic equation is there, but Sucker Punch has thrown in enough twists to make things more fresh and interesting.

The first important thing to note is that Cole has pretty much all of his powers from the finale of Infamous. For those that missed the first game, the initial third of the game was a lot slower because Cole couldn’t grind on power lines or use his electricity to fly. When he earned those powers, Empire City suddenly became a playground of exploration. Infamous 2 jumps right into the action, and damn it, you can fly wherever the hell you want. With all of Cole’s powers intact, there’s nowhere to go but up, which means that gameplay evolves from merely feeling like you control electricity to feeling like a superhero with all the power in the world. That sets the stage for all sorts of madness, and while you still have the formula of story/side/hunt quests, there’s more variety — and ambiguity — involved.

(One of my favourites was Zeke’s request to take out street performers because they’re annoying. I wholeheartedly agree, and I’m not sure why this is an Evil mission.)

When you break down the missions, there’s certainly more variety than the first game. Combat missions get a mix of monster enemies and militia vehicles, escort missions sometimes have NPCs with superpowers, and story missions make use of Cole’s expanded power set (both good and evil). A lot of it is familiar, just upgraded or expanded. However, the pace of the game can be varied. I suppose that’s inherent with any open-world game, but it does feel like the very comic-book story is more in the way than anything else. The flip-side to that is that you’ll be requested to do various errands when, you know, a giant time-traveling energy monster is on its way to destroy you. It’s the same syndrome that’s plagued open-world games like Grand Theft Auto in the past, and while the game’s freedom (both in physical movement and in exploration) is invigorating, it does take away from the central storyline, particularly when you stop story missions to mess around with user-generated content.

User-generated content? Yessir, Sucker Punch has taken a page from PS3 sister LittleBigPlanet. Some months back, pre-release discussion focused on what Infamous 2’s online functionality would be. Turns out, rather than some sort of multiplayer superhero competition, Infamous 2 comes packed with a level editor for users to create and share side missions. The missions appear on your map as green icons based on proximity and filter (high-rated, featured, etc.), and all give the same amount of XP as regular missions. User-generated missions are hit and miss, though that’s to be expected early on. With just a few weeks under the community’s belt, it’s unsure just how much support this will get. This has the potential to extend the game’s life or it could just be a forgotten feature in a few months.

Infamous 2 isn’t groundbreaking in any way. It takes what worked from the first game, pretties it up, and expands it with the bigger-is-better philosophy. The story gets lost on the way and the user-generated content is uneven so far, but it’s still a well-crafted experience that makes you feel as charged up as a superhero could be. Creative powers, strong graphics, and the potential for continual replayability thanks to user-generated content make Infamous 2 a far better game than its predecessor.

By Mike Chen
Tags: Video Game Review
This entry was posted on Thursday, June 30th, 2011 at 10:21 am and is filed under Mike Chen, Video Game Reviews. You can follow any responses to this entry through the RSS 2.0 feed. Both comments and pings are currently closed.