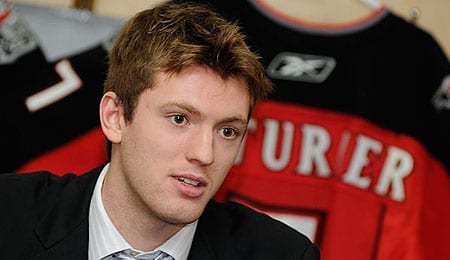 Sean Couturier brings a lot to the table for the Flyers.

Editor’s note: Hockey correspondent Rob Reath is back to enlighten us on all things Philadelphia Flyers today, on this, the fifth anniversary of RotoRob.com! I’d like to take this opportunity to thank the site’s wonderful designer, Tim Emery, and all the great writers we’ve had over the years, without whose superb work we probably would have never reached this milestone. And thanks to all of our readers for your support and (generally) kind words over the years.

First round (eighth overall), Sean Couturier, centre, Drummondville Voltiguers (QMJHL): It’s been three long years since the Flyers had a first round pick, but when they finally got their chance with the eighth overall pick (recently acquired from Columbus in the Jeff Carter deal), they were faced with some tough choices. When Winnipeg made a slight reach and selected Mark Scheifele with the seventh pick, passing on Couturier, a top centerman, and Dougie Hamilton, a big, right-handed, all-purpose defenseman, Philadelphia was left in a pleasant position.

People will ask why the Flyers did not take the promising Hamilton, who seemed to address everything the team required to restock arguably the franchise’s greatest need. The simple answer here is they went with the best player available. While Hamilton could easily turn out to be an absolute gem of a defenseman, Couturier’s pedigree screamed out at the Flyers. He has size (6’4”, 195), skill and is defensively complete as a forward. Couturier hits, fights, and has great vision.

He led the QMJHL in scoring in 2009-10 and matched his totals last season, despite playing 10 fewer games as a result of Mononucleosis. Some claim that the Flyers acquired Braydon Schenn to replace Mike Richards as they play a similar style, and so the mass conclusion has led to observations that Couturier will match the play of Carter.

However, they are not alike at all. Carter is known for his quick release and shoot-first mentality while avoiding the physical game in lieu of generating more points.

The comparisons are almost as ridiculous as when some started comparing James Van Riemsdyk to Eric Lindros. Couturier is more of a cross between Michal Handzus and Rod Brind’Amour, while many liken him to Jordan Staal as well. Couturier is strong in all areas of the game with the one exception being his skating. His on ice awareness compensates somewhat, but this is an area of his game he will have to improve and the good news is he acknowledges he needs work.

Nonetheless, Couturier’s immediate future will likely see him sent back to the juniors for another year of seasoning, but it is not at all outrageous to suggest that with a strong training camp he might just steal himself a job in the NHL this season.

Third round (68th overall), Nick Cousins, centre, Sault Ste. Marie Greyhounds (OHL): Cousins had a pretty good season for Sault Ste. Marie (29 goals, 39 assists), but most significantly his improvement in multiple areas, including production, allowed the Flyers’ staff to project him as someone who may continue to thrive and grow in their system.

He’s got size (5’10”, 170) and is somewhat of an agitator. Cousins possesses a gutsy attitude, a good work ethic and some maturity to accompany it. He usually knows where his linemates are and how to position himself around the net. There are a lot of reasons to like this kid as he seems hungry to succeed. Cousins will need work on his defensive game but, like Couturier, he is ready to face his shortcomings and try to master them. That is always a great sign at such a young age.

Cousins will need to add a few pounds, but that’s common for a 17-year-old. Look for him to return to the OHL this season and expect the Flyers to show patience with his progress. After these top two picks, suddenly the Flyers’ system is looking very deep at centre again.

Fourth round (116th overall), Colin Suellentrop, defense, Oshawa Generals (OHL): Many Flyer fans may have been screaming and crying for the team to get a defenseman in this draft, and the surprise is not that they got one but they got only one. Suellentrop, who yields from a place called Plantation, Florida, is a big, nasty, bruising type of stay at home defender.

He has the unlikely distinction of going from -37 as a rookie in 2009-10 to +21 last season. Plus/minus can often be a misleading stat, but when the change is that severe it’s obvious that the kid just had to improve by leaps and bounds. At 6’2’’, 192, Suellentrop is a very capable fighter and plays a hard nosed game. Will he ever be Mark Howe? No. He will never likely be a productive threat at all in terms of points, but with some continued refinements in his positional play he may well become a nightmare to play against. This guy is on a learning curve and the fact that he responded tremendously to an increase in responsibilities is very good news. This bodes well for both Suellentrop and the Flyers.

Fourth round (118th overall), Marcel Noebles, LW, Seattle Thunderbirds (WHL): This German native found his way onto the Seattle Thunderbirds roster in the WHL, but did not exactly find himself on a winner. The T-birds had some obstacles, but the 6’3” Noebles played hard and found himself with a respectable 54 points in 66 games.

While he can feed the puck to an open man fairly well and has a decent shot, his skating may become the deciding factor in how far he progresses and the rate of his success. It is also important to realize that this is the same knock on all kinds of players that had long careers in the NHL. When Noebles was 14, he ripped up one of the German leagues with ridiculously high numbers, probably because of inferior opposition or a few flashes of brilliance that indicate it was more than a fluke. Obviously the Flyers are hoping the latter to be the case. He’ll get a good look.

Sixth round (176th overall), Petr Placek, RW, Hotchkiss School (Czech Republic): If someone suggested the Flyers were looking for attitude in this year’s draft, most would laugh and presume that means someone who picks fights after the bars close every weekend. Times have changed and so have the Flyers; now when they look for attitude it is a far more sophisticated approach they seek. Their first two picks offer a lot of maturity and the type of self-effacing honesty that is generally lacking in professional sports.

Suellentrop has displayed great capacity to overcome holes in his game and bring the rough and ready deal for all comers. And then there’s Placek, a kid who sought his own preferred hockey destination (Hotchkiss) for its combination of academics and athletics. He wrote them when he was 15. Placek is on his way to Harvard and his grades are impeccable. It doesn’t detract from his appeal — he stands 6′ 4″ and weighs 210 pounds, and while he only played high school level hockey, many feel there is a ton of untapped potential in him. This naturally makes him somewhat of a question mark because so many things can change on the long road to the NHL.

Because of the limited number of games Placek played (10 games, scoring 13 points), the book is still somewhat open on him. He will have at least four years at Harvard to work on his game, and it says here, he has the right attitude.

Seventh round, Derek Mathers, RW, Peterborough Petes (OHL): There is a new heavyweight (6’3”, 230) in town and his name is Derek Mathers. He’s just 17, and the reason people know his name is that he can throw his dukes better than most people many years his senior. Every GM in the NHL has watched this guy and not without some interest and curiosity.

Mathers does not generate any real points to speak of, but he does have a fair enough shot and can move well enough to land some big hits. He is not known for offense at all, but what he offers instead is the smarts about how to handle the role of a pure enforcer and not hurt his team with ill timed selfish play. If a fight can ignite a team’s play and you want a guy who fully understands just how to do that, then Mathers is your man.

By RotoRob
This entry was posted on Tuesday, June 28th, 2011 at 10:29 am and is filed under Draft report, HOCKEY, RotoRob correspondent report. You can follow any responses to this entry through the RSS 2.0 feed. You can skip to the end and leave a response. Pinging is currently not allowed.